What is Sunday morning without scramble on toast? What is Saturday brunch without the
perfect omelet? French toast, waffles, fried rice, quiche — these popular dishes all have one
vital ingredient in common: eggs.

What if you could still have these dishes, without the need for a chicken, though? Vegan options are cracking open the egg market in a major way. A number of brands are creating realistic, plant-based alternatives. So you can have all the dishes you love, without compromising your ethics. 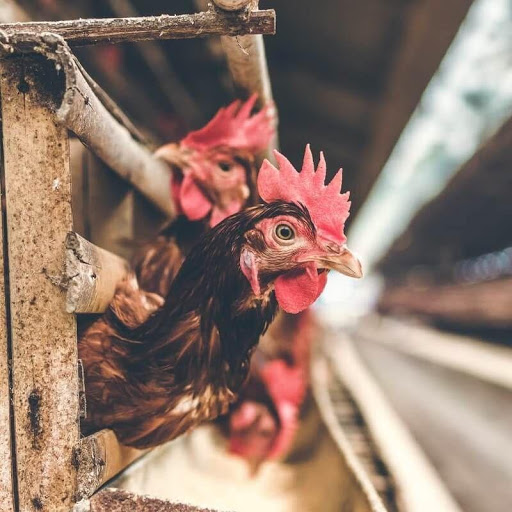 Chickens suffer in the egg industry.

Animal Welfare in the Egg Industry

The global demand for eggs leaves little room for animal welfare in the egg industry. Quite
literally.

More than 300 million chickens suffer for egg production every year, and it is estimated that more than 60 percent of the world’s eggs are produced in an industrial environment. Many of them come from battery farming conditions.

On battery farms, chickens live in dark, cramped environments. With little to no space to
move around, caged hens will never see natural light or breathe fresh air. The average space allowance per bird in a battery cage is smaller than an A4 sheet of paper, says Compassion in World Farming (CiWF). They’re forced to live so close together, they often have their beaks painfully trimmed to stop them pecking at other hens.

Many birds also lose their feathers due to the stress of confinement and the high levels of
ammonia from the animal waste in the sheds. Even if you buy free-range or organic
labeled eggs, chickens are still subject to harmful conditions.

British journalist and author Chas Newkey-Burden writes for the Guardian, “you’d need Disney-level imagination to believe the UK can produce more than 10bn eggs each year without inconveniencing any chickens.”

On both battery farms and free-range farms, male chicks are often killed when they are only just a day old, as they are of no use to the industry.

A spokesperson for Animal Aid told the Independent, “that their few short hours of life are ended in a gas chamber or minced alive in an industrial macerator is beyond cruel. Consumers should be aware that this is what they are paying for when they buy eggs, regardless of whether they are from caged or free-range hens.” 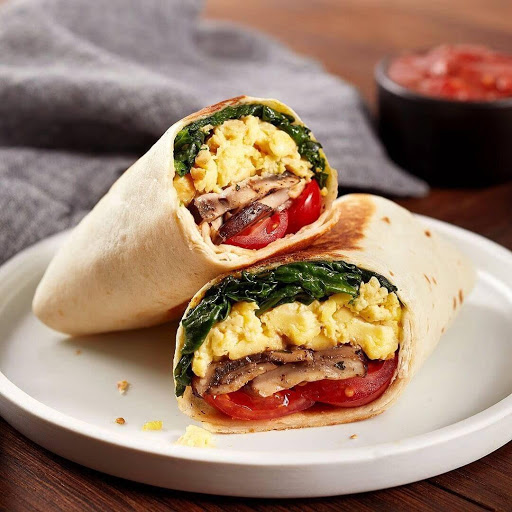 Dr. Norrina Allen was a researcher on the study. She told the Independent, “we want to remind people there is cholesterol in eggs, specifically yolks, and this has a harmful effect. As part of a healthy diet, people need to consume lower amounts of cholesterol. People who consume less cholesterol have a lower risk of heart disease.”

If you still want to enjoy that familiar egg taste and texture without the cholesterol, here are the very best vegan products on the market for you. 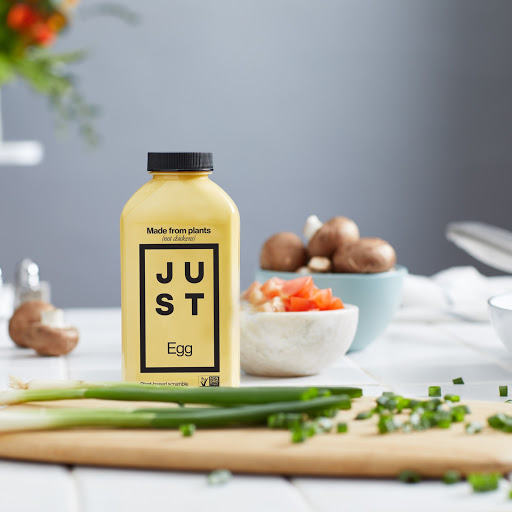 JUST’s vegan egg is made from mung beans.

From Kim Kardashian’s Instagram Stories to the shelves of major supermarkets, JUST’s
plant-based, protein-packed egg product is everywhere. And for good reason. JUST Egg is
made from mung beans, but its taste and texture is distinctly egg-like. It’s high in protein, just like its chicken-derived counterpart. Unlike chicken eggs though, JUST Egg is cholesterol-free. It’s also non-GMO and free of artificial flavors and preservatives.

Food magazine Bon Appetit has given the product its seal of approval. Journalist Kyle Beechy wrote for the publication, “I had to check the label twice to make sure what was on my plate didn’t come from a chicken.” Beechy isn’t alone. The product is loved by many meat-eaters. According to a survey conducted by the brand, 77 percent of those who regularly choose JUST Egg also regularly eat animal products.

If you don’t believe the hype, the company’s statistics may convince you. The brand has now sold the equivalent of 11 million chicken eggs. In some locations, it has managed to outsell traditional eggs. “There are few examples of a plant product outselling an animal product in national distribution – this is one of them,” says JUST. 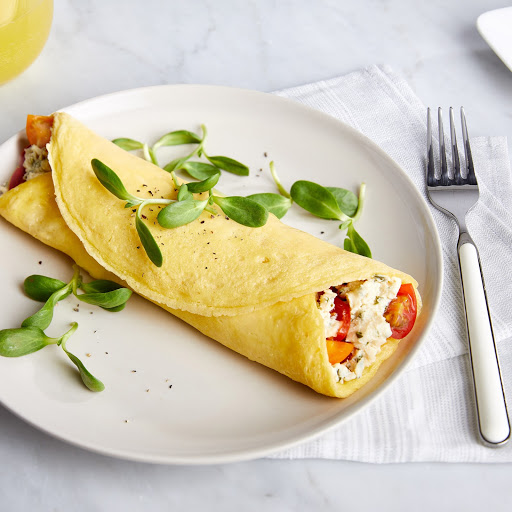 If you don’t fancy omelets, you can make breakfast scramble with the vegan egg, as well as quiches, breakfast tacos, crepes, French toast, waffles and the Moroccan favorite,
shakshuka. JUST Egg works in many of the cooking applications where you’d use an egg. 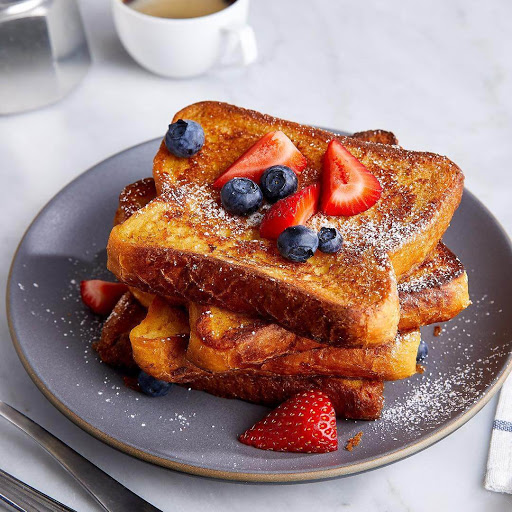 Already widely available across the U.S., JUST Egg can also be found in mainland China,
Singapore, and Hong Kong. The company has its sights set on making its product available
around the rest of the world, too. It’s working with egg expert (an eggspert, if you will) David Wagstaff to bring its product to Europe. Wagstaff is the former executive director of Europe for Happy Egg, a major free-range egg company.

The number of U.S. stores selling JUST Egg increased by 200 percent from quarter four of
2018 to quarter one of 2019 and it’s continuing to climb. If you’re eager for a try, you can find it in Kroger, Whole Foods, Safeway/Albertsons, Hy Vee, ShopRite, Giant, Sprouts, select Walmarts, and many more supermarkets. 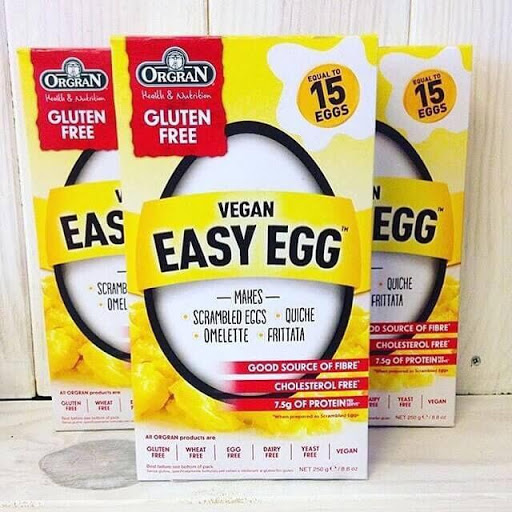 Use Organ’s Vegan Easy Egg for omelets and quiches.

If you’re a baker at heart, you might be thinking “I can’t give up eggs because how else will I make my cakes?” Well, Orgran Foods is here to tell you you don’t need to give up on your passion. It’s No Egg Egg Replacer will allow you to bake all the cakes and cookies you love, without the need for a chicken egg. Its egg replacer — which contains the equivalent of 66 eggs in each pack — even has a similar texture to the real thing.

The company also makes the Vegan Easy Egg. The vegetable-based vegan egg product is
“revolutionary” according to Orgran. You can use it to make all of your favorite egg-based
dishes, including omelet, quiche, and frittata. The brand says, “equal to 15 eggs per pack,
Vegan Easy Egg is cholesterol-free and low in fat. For a good source of fiber and 7.5g of protein per serving, this product will surely become a household favorite.” 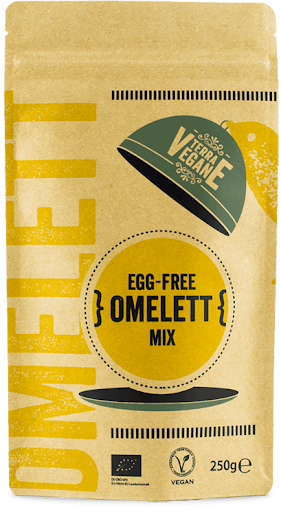 Use Organ’s Vegan Easy Egg for omelets and quiches.

Terra Vegane is responsible for creating the world’s first-ever vegan omelet mix. It’s made with a blend of chickpea, amaranth, and cassava. According to the brand, all you do is mix equal parts vegan omelet mix and water in a pan. As well as omelets, you can use the mix to create quiches, Spanish tortillas, frittatas, and Japanese tamagoyaki.

The mix is available from a number of stores and online destinations including The Vegan Kind Supermarket. One customer wrote, “we recommend it for anyone missing omelets.” Another added, “tastes amazing! Almost like the real thing.” 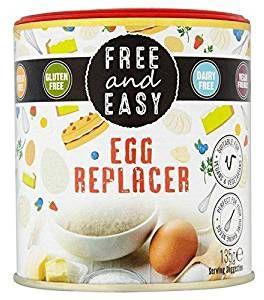 Free and Easy’s Egg Replacer is perfect for cakes and cookies.

According to Free and Easy, its Free From Vegan Egg Replacer — made with potato flour,
tapioca flour, cream of tartar, and xanthan gum — is ideal for home baking. You can use it to make cakes, meringues, cookies, and even pancakes. It’s not only free from eggs, but it’s free from gluten, wheat, nuts, and soya too. If you’re eager to give it a try, it’s available from a number of stores in the UK, as well as online retailers Amazon and Ocado. 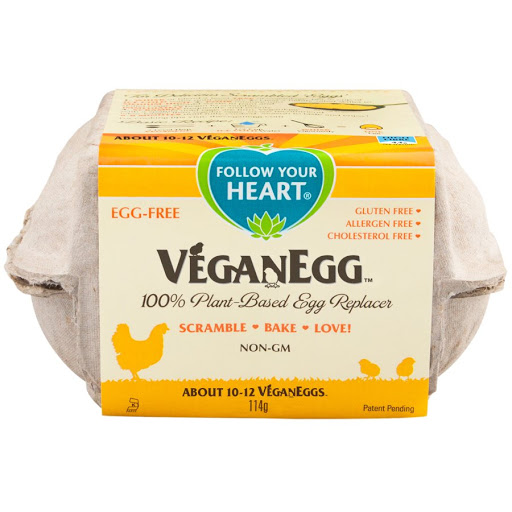 Follow Your Heart’s gluten-free, cholesterol-free VeganEgg is made with soy milk powder.
According to the brand, you can use it for baking cookies, muffins, cakes, and even scrambled eggs and omelets if you’re in the mood for something a little more savory. It’s just as versatile as the real thing, with a spot-on taste and texture, says the brand. The only difference is, it’s better for your health, the animals, and the environment.