Eggplant. Aubergine. Brinjal. No matter what you call it and where you are in the world, you’re likely to find eggplant in the produce aisle. Often considered a vegetable, eggplant is technically the berry of a plant from the nightshade family. It comes in all kinds of shapes, sizes, and colors, ranging from oblong and purple to white, yellow, green, black, and striped. Here’s what to know about eggplant and the best vegan eggplant recipes to try.

Eggplant is a good source of manganese, folate, potassium, vitamin K, vitamin C, and fiber. It is low in calories and also contains small amounts of other nutrients such as copper, magnesium, and niacin, according to Healthline. Eggplant is also a source of a number of phytonutrients with antioxidant properties. They are rich in anthocyanin, specifically nasunin, a pigment that gives eggplants their vibrant color. Test-tube studies have shown than nasunin is effective at protecting cells from free radical damage. 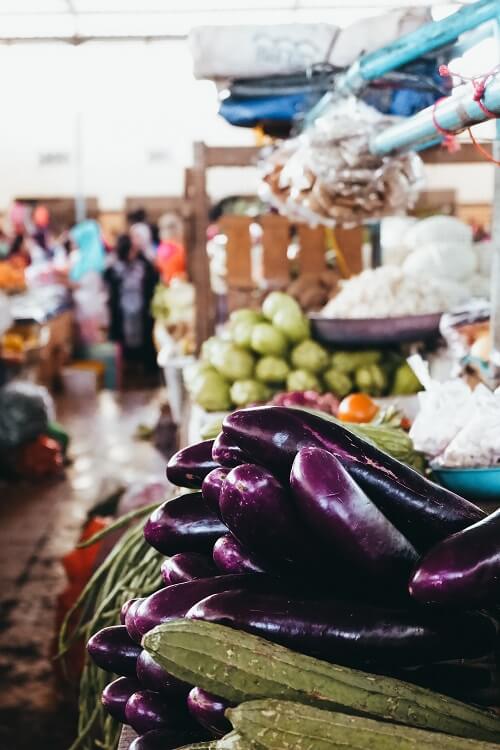 How can you tell if an eggplant is ready to cook?

How do you pick the best eggplant? Choose one that feels heavy for its size. Pick up a few at the grocery store to get a feel for the difference in weight between eggplants. Go for eggplants that have smooth, shiny, and vibrant skin that’s firm to the touch and free from bruises. Dull skin is a sign that the eggplant was improperly stored while wrinkled skin is a sign that it’s old. Both mean that the eggplant may taste bitter, even when you cook it. Be sure to check the stem, too. A green stem means the eggplant was recently harvested while brown, dried-out stems are a sign of age. The stem should also be free from mold. Choose small to medium-sized eggplants for the best flavor — larger sizes tend to be bitter.

How Best to Prepare Eggplant

Eggplant has a creamy texture and is known for having a bitter flavor, thanks to phenolic acids, a type of enzymes. Luckily, it’s easy to make eggplant less bitter by “sweating” it. Start by topping and tailing the eggplant. Then, slice it into half or one-inch rounds (slice it lengthways if you’re making stuffed eggplant or eggplant fries)  — no need to peel the skin, unless you prefer to. Line a baking sheet with paper towels or a clean kitchen towel, and generously rub both sides of each slice with salt. Lay flat on the baking sheet and let rest for 20 minutes minimum. Then, blot away the excess salt. Your eggplant is now ready to cook. 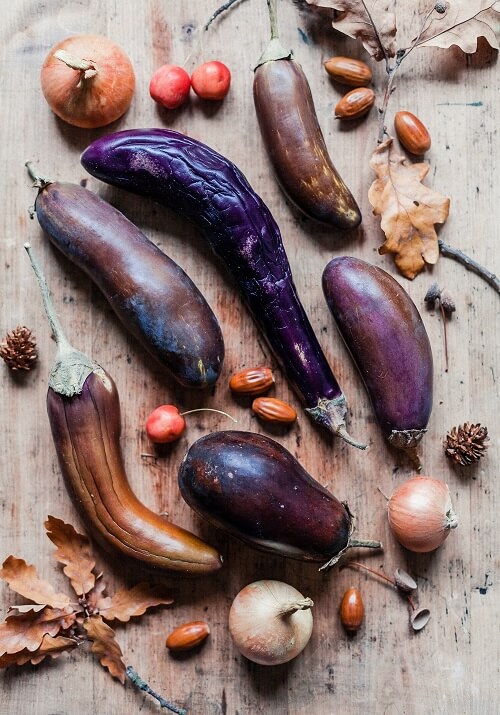 Eggplant is a versatile fall vegetable.

Eggplant is a lot more versatile than you might think. Eggplant can be baked, braised, stir-fried, deep-fried, mashed, and blended into creamy dips. It also holds up fantastically on the grill.

Ready to get cooking? Give these vegan eggplant recipes a try. 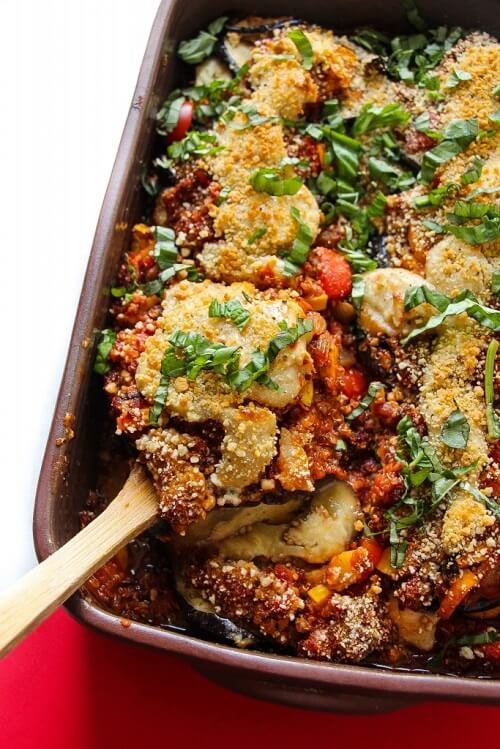 An Italian-American classic. | Layers of Happiness

The ultimate eggplant dish, only vegan. This dairy-free eggplant parm features the eponymous veg coated in tomato sauce loaded with quinoa, vegetables, garlic, basil, and made-from-scratch vegan mozzarella. It’s topped off with a layer of breadcrumbs that crisps up in the oven. 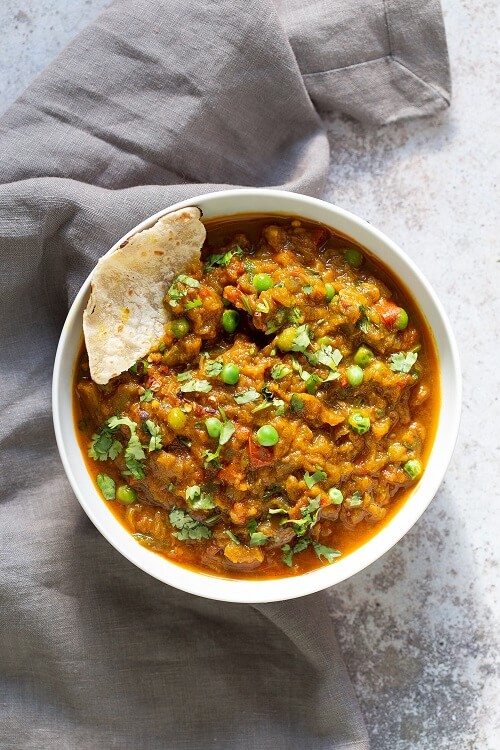 Break out the Instant Pot for this baingan bharta. Popular across India, the traditional dish involves roasting whole eggplant over a flame, then mashing it up with spices, tomato, and onion. This easy Instant Pot version skips the fire-roasting. Add smoked paprika or liquid smoke to get for an authentic flavor. Serve with flatbread and chickpeas. 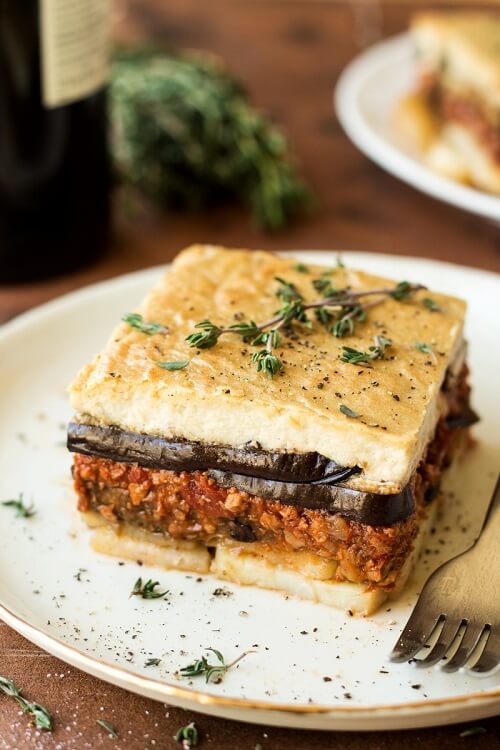 Moussaka is a dish with numerous regional varieties. In Greece, it’s served hot. In Arab countries, it’s sometimes served cold. But, it always features eggplant and tomato. This vegan Greek moussaka features layers of potatoes and eggplant, a meat-free ragu sauce made with soy mince, and creamy cashew bechamel. 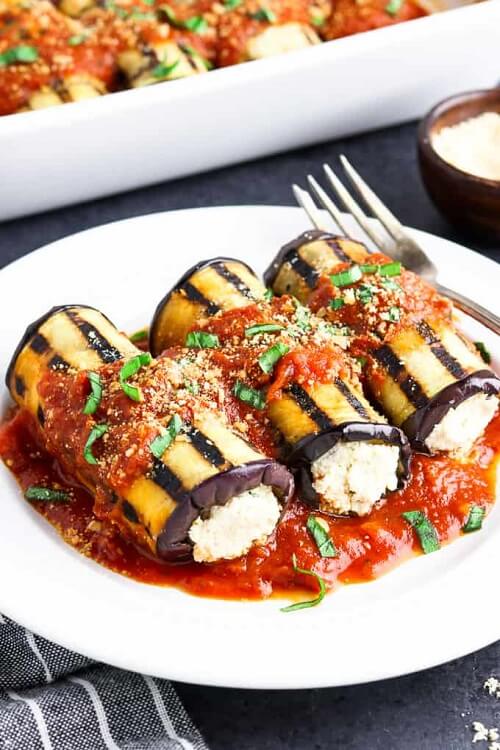 This Italian-style dish features thinly-sliced eggplant stuffed with homemade tofu ricotta cheese baked with a generous serving of marinara. If you don’t have time to make your own vegan ricotta, try out a store-bought version, like Kite Hill or Tofutti. 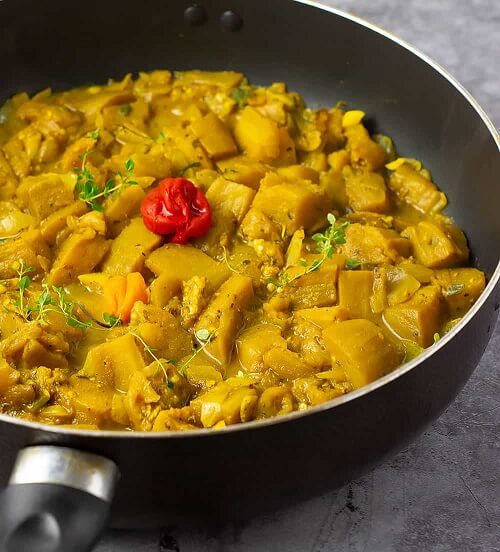 So very nice and full of spice. | Michelle Blackwood

This delicious vegan eggplant curry is made with a wealth of traditional Jamaican spices, such as thyme, curry powder, garam masala, and Scotch bonnet pepper. If you don’t have Scotch bonnet, substitute for habanero or cayenne pepper. Serve over rice. 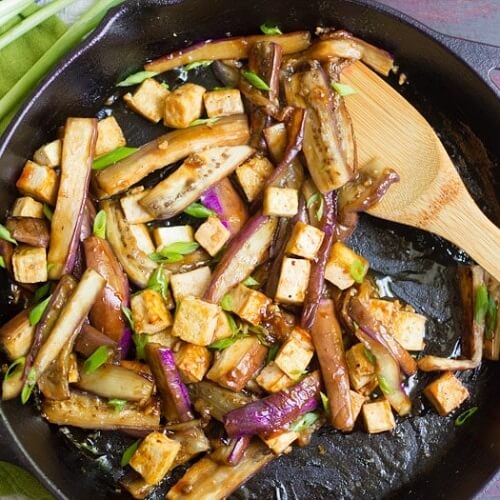 This Chinese dish consists of eggplant pan-fried in a garlicky, sweet, and spicy sauce with crispy tofu. Use Chinese eggplant (it’s longer than the standard version and less oblong) to make this recipe. 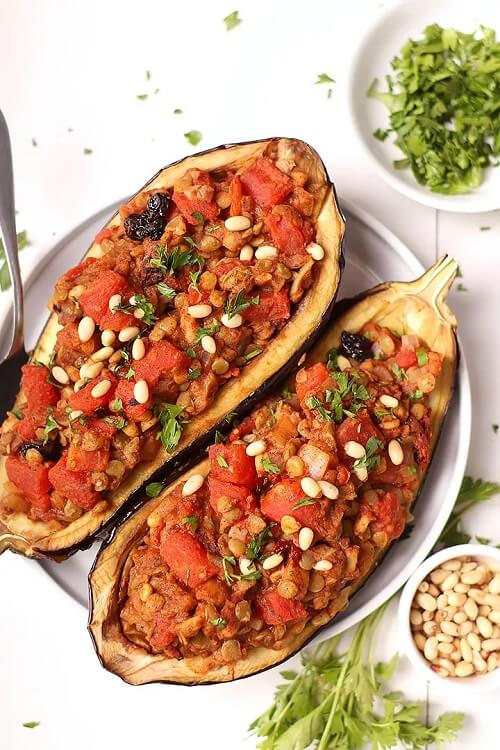 These eggplants are stuffed with a Moroccan-style mix of lentils, tomatoes, garlic, onion, and plenty of spice. It’s perfect for weeknight dinners and get-togethers. 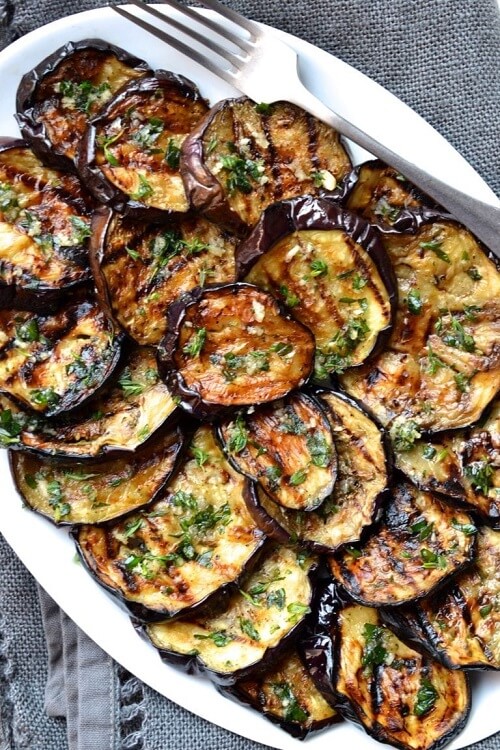 Break out the grill pan. | Every Last Bite

Barbecue season may be over, but you’ll want to break out the grill pan for this easy side dish. Grilled eggplant is dressed in olive oil, garlic, parsley, oregano, salt, and pepper, and grilled until golden and crisp around the edges. 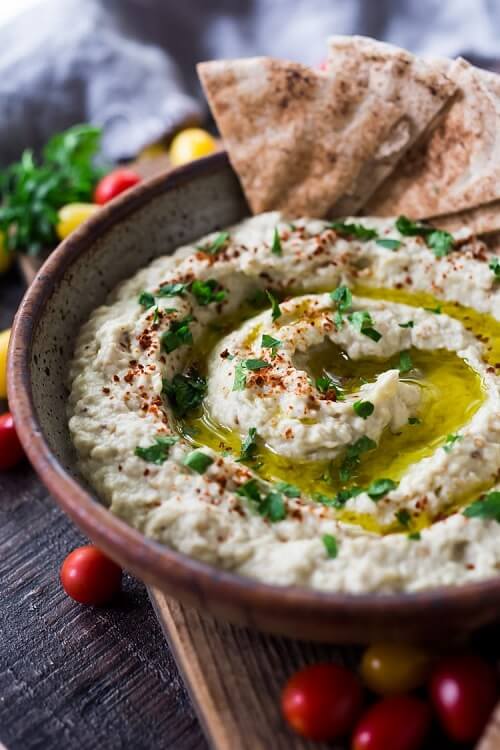