By Michael Monson from Monson Made This
Jump to recipe

I’m obsessed with this recipe for Vegan Enchilada Suiza Bake, which was developed out of my love for chickpea flour and the YouTube autoplay rabbit hole I fell through last week.

Normally my “work” week begins on Monday when I finalize my weekly recipes, and publish my latest video. After that, it’s time for me to plan my next recipe and video. I like the process to be fairly organic. What foods have I been into lately? What techniques am I obsessed with? What dishes have I been wanting to veganize? I think about food trends, and seasonality a little bit, but mostly it’s about what I’m craving on a particular day, and whether or not I think that other people would like to learn how to make it.

I had mentioned falling down an autoplay rabbit hole, and that’s exactly what it was. One minute I was binge watching videos of raw vegan families, and those living minimalist bucolic lives on the beaches of Hawaii, thriving off of nothing but fruits and vegetables and seeds, and then the next minute, I found myself watching people making a “dough” out of cheese and eggs, and then stuffing it with Jimmy Dean sausage.

I had dropped down in the middle of Keto land.

Here was this very midwestern American couple talking about not eating carbs and putting fat bombs in coffee and going to the gym and not really eating any vegetables. It was a complete 180 from the banana island I had just been on. How did I go from watching people live off of the land, talking about sustainability and the beauty of nature, to hearing people rationalize the purchasing of expensive bacon and steaks was an “investment” in their health? (Buy an expensive steak today, and you’ll save on medical bills tomorrow. Really.)

How did I get here? Which way should I run?

Have you ever heard of hate-watching? It’s a thing. And I did it.

I watched those Keto videos for hours; sticking mainly to that one channel (So now autoplay can stay in a groove? Cool.). I was in an alternate universe. I was in the Upside Down. Inside-out. But boy was I hooked! The tropes were the same: the taste test videos, the what-I-eat-in-a-day videos, the criticism of opposing views on a “healthy” diet, and of course recipe videos. It was exactly the same, but oh so different.

One of the recipe videos I watched was for a breakfast enchilada bake. The recipe was simple. Make thin omelets to act as tortillas. Brown some sausage. Roll the sausage in the egg tortillas, top with enchilada sauce and an f-ton of cheese. Bake.

Full disclosure: I found this recipe to be oddly inspiring and oddly delicious in theory. And because that was in the Upside Down, I decided I wanted to try and make it Rightside Up.

What would make a good egg substitute for these “tortillas”? What about my favorite egg replacer for making omelets? Chickpea flour!

I have been trying to use it in a ton of applications, and it has been passing most of my tests. I use it as the binder when I make air-fried anything. It makes a perfect coating when making Buffalo cauliflower. It makes an amazing flatbread that can be used as a tortilla. It can even be used to make a savory matrix to use in place of the eggs in an omelet. It’s a brilliant ingredient!

I wanted to keep the recipe more plant-based, so I thought about making a sausagey black bean mixture for the filling, but then I was pretty much at black bean enchiladas, which is fairly ubiquitous in the vegosphere. Pass. I didn’t want to use any vegan meats, and I didn’t really want to use any vegan cheeses… The idea was simple, and It could have easily been made with chickpea pancakes, vegan sausage, enchilada sauce, and vegan cheese. Done. Veganized Keto.

But that wasn’t enough for me. Back to the rabbit hole.

I found another Keto channel to binge watch. Yup. (Don’t judge.) This one featured a bearded guy who acquired his fan base through testing various Keto recipes from the Internet and making up a few of his own. I liked his style, and It reminded me a lot of what I go through when I try to make a recipe vegan. Like veganism, Keto has a list of DO NOT EATs, and a list of commonly used alternatives. Vegans are concerned about removing the animal products from their diets, while Ketoans are concerned about removing the carbs. There’s even some overlap in terms of a commonly used substitute: If vegans and Keto people can agree on one thing, it’s cauliflower.

The host of this other Keto channel explained how he had taken one of his favorite pre-Keto recipes and made it Keto. The logic felt very familiar to me and my vegan journey: replace what you can’t eat in the recipe with alternatives that you can.

The recipe he was converting was called “Enchilada Suisse” and it was from a regional church cookbook that he claimed had gone viral. He showed the original recipe on the screen, and then proceeded to replace the corn tortillas with egg tortillas. He then fried every ingredient, including a torn up rotisserie chicken, in bacon fat before rolling it all into the egg tortillas, and drowning everything in chicken flavored heavy cream. Cheese was sprinkled on top, and then the whole dish was baked.

As triggered as I was, I was also inspired. My wheels turned. What would I replace in this dish? I could use a cashew cream, and maybe add a bit of nutritional yeast to give it a cheesy flavor. Soy Curls instead of the chicken. I could use those chickpea flour tortillas…

And the rest, as they say, is history.

So, like a strange game of recipe telephone, I have a southern recipe that was inspired by a Mexican recipe that uses Swiss ingredients, that was then made Keto, that I then made vegan.

I’m in love with this dish! It’s easy to make. It comforting and filling, and it uses an unusual ingredient that actually adds a lot to the texture of the dish. And don’t get me started on that cashew cream! Life begins and ends with this “green chili cashew cream”. It’s my new soup. 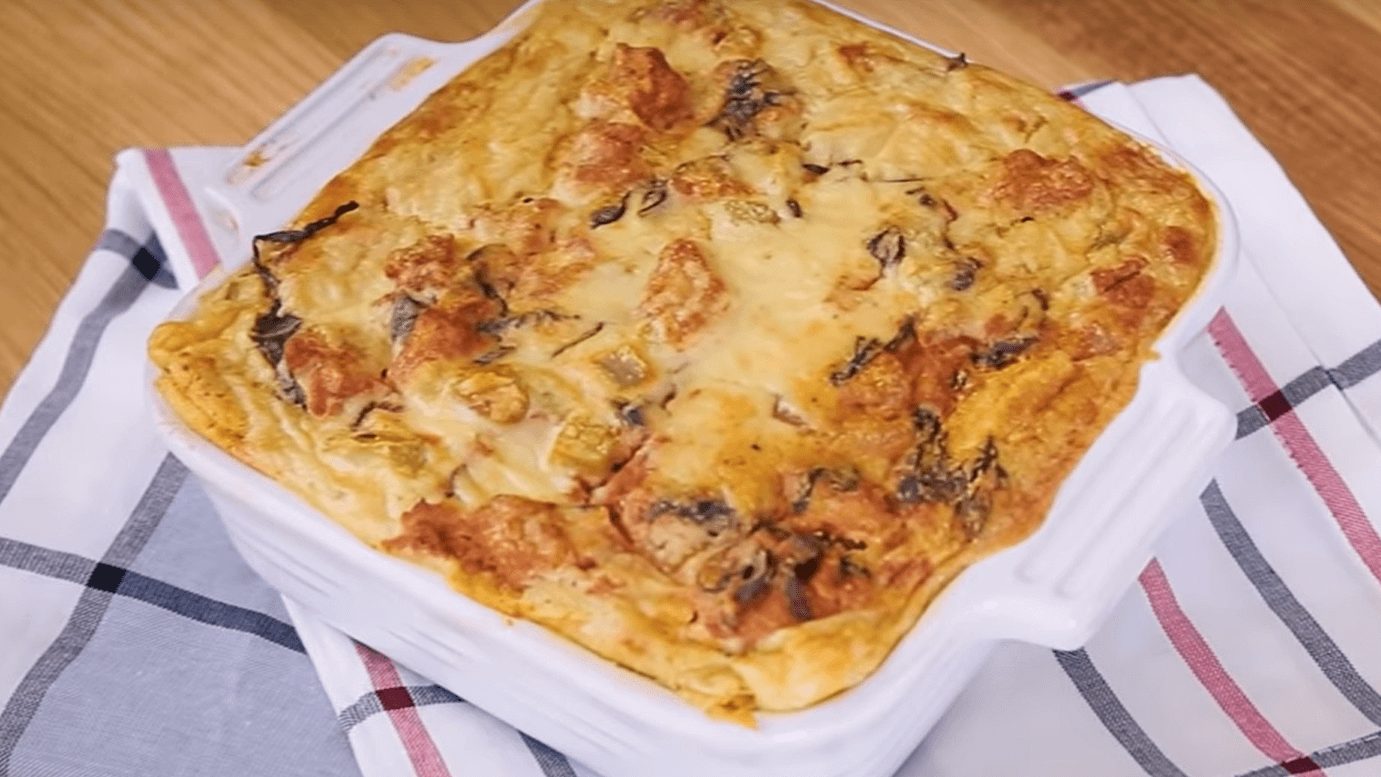 *Don’t want to use Soy Curls? Use an equivalent amount of baked and then shredded jackfruit (see my Pizza Buns recipe) **This might be a good time to use the medium to small pieces in the bag.

For the Chickpea Flour Tortillas:

For the Chickpea Flour Tortillas:

To make the filling:

This recipe was republished with permission from Michael Monson from Monson Made This.