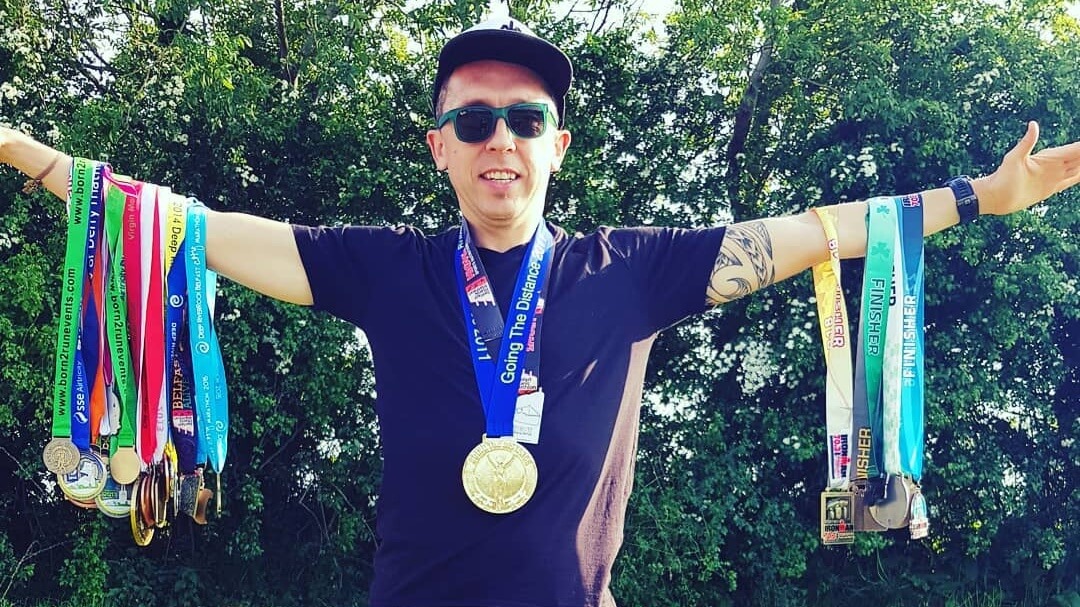 Vegan author, entrepreneur, and athlete Conor Devine has completed his seventh IRONMAN challenge. The race included a 2.4-mile swim, a 112-mile cycle, and a 26.2-mile run.

Devine shared images of himself at the race on his Instagram page. “Yesterdays race in Bolton was brutal, with temperatures hitting 26c, a warm breeze flowing, a very difficult revised bike course, and a challenging marathon,” he wrote.

Devine told LIVEKINDLY that training for the event involved an intense exercise regime: “I worked to a six-month training program which effectively seen me training six days a week.  I have been exercising now pretty much every day for the last few years as it has played a huge role in my ongoing MS recovery, so the Ironman training falls nicely into my routine and gives me a great goal to aim for.”

“The program builds up month after month and come month five, I’ll be swimming, cycling and running 15 hours per week.  The last few weeks of the 6 months I am on the wind down to taper for the race,” he continued.

Devine has now completed two full IRONMAN races and five Half IRONMAN events in the last 36 months, something he names an “incredible sense of achievement,” though exhausting. “There is a small percentage of the world’s population who have achieved Ironman status and It was great again for me on a very personal level to cross the finish line to prove to myself that I am strong, and with the right application I can go on and realise whatever goals I have in life,” Devine added.

Following the marathon, Devine said that he increases his intake of anti-inflammatory plant-based foods like tomatoes, leafy greens, berries, oranges, and almonds to aid in recovery. Though he experienced post-race fatigue, the vegan athlete notes that his recovery is excellent: “I have no doubt this is down to how I lead my life in terms of my lifestyle.”

On top of his involvement with IRONMAN, Devine has completed eight marathons and 10 Olympic and sprint-distance triathlons. His accomplishments in endurance running have not come easily, for the past 12 years, Devine has lived with Multiple Sceloris (MS) — a neurological condition that can affect the brain, spinal cord, vision, and arm and leg movements, including balance.

Following his diagnosis, Devine adopted a plant-based diet. “I have intermittent MS symptoms every day. But since I went plant-based my health has improved substantially. I don’t have any side effects from the drugs,” he said.

Speaking to IRONMAN UK just prior to his most recent IRONMAN event, Devine said, “I’ve always been one for self-improvement and for taking on new challenges.”

“Three years ago I couldn’t swim 50 meters, and I never started out in triathlon considering I’d become an IRONMAN—all I wanted to do was complete a sprint distance race and stay alive. Yet the event sucked me in and I got the buzz,” he explained.

Expanding on the role of plant protein in his athletic achievements, Devine said, “I used to believe that we get our protein from meat, then I found out that all protein can be found in plants. When athletes such as ultra runners Rich Roll and Scott Jurek, freerunner Tim Shieff and more have adopted similar approaches, it brings awareness to the whole food discussion.”

He noted that he commonly eats porridge, fruit, chia seeds, and flax seeds and grazes throughout the day. He also enjoys cooking with his two children, who also follow a plant-based diet.

As well as his athletic feats, Devine has written two books, “Ironmind: Against All Odds” and “Attitude Is Everything: My Multiple Sclerosis Story.”