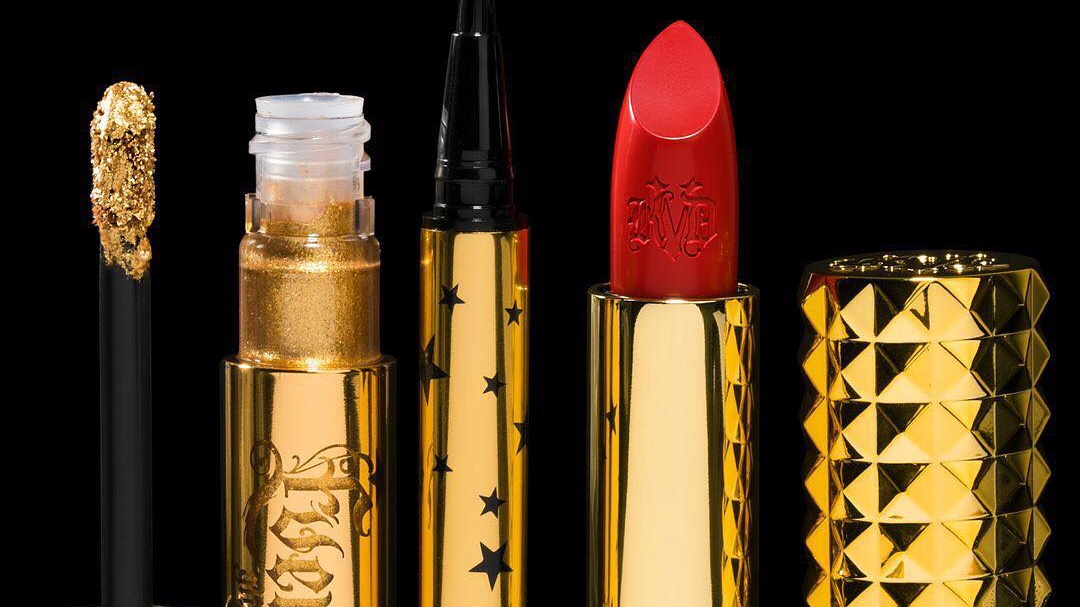 Serial entrepreneur Kat Von D has a lot to celebrate. In the ten years since launching Kat Von D Beauty, her makeup line has achieved global distribution, with ambassadors and devotees singing its praises across the planet.

The multi-faceted artist opened her brand up to an important new audience in 2016 when, after becoming vegan herself, announced the brand would be fully vegan and cruelty-free. That shift launched her into new heights–becoming an outspoken voice for the animals and a figurehead in the vegan movement. She’s since announced the launch of a vegan shoe line expected later this year. Last month she won a Latino Spirit Award for her work. And later this year she’s expecting her biggest project to date — a baby with husband, Leafar Seyer, the singer for goth band Prayers. The couple was married just last weekend in Los Angeles.

In honor of Kat Von D Beauty’s ten year anniversary, the brand has launched a signature range of products in a gold theme.

The brand also rolled out a highly-anticipated brow collection back in April, just ahead of the anniversary celebration. LIVEKINDLY caught up with Von D at the brow launch.

Everything that glitters is GOLD ✨ . . 10 years of #katvondbeauty available in @Sephora stores now

Von D isn’t a makeup artist by trade. She’s built the beauty brand by looking at her own needs and wants and relying on her expert team of artists and developers to create products that work. That can be a challenge in an industry dominated by animal byproducts, but for Von D, it was just a challenge she was eager to take on.

“If I have the power and the ability to make it easy for people to live a compassionate life, then I’m so excited,” she said. “And I see that as an opportunity to help. I like being an example of activism in different ways.”

Indeed, changing the market for beauty products at retail giants like Sephora, where the brand is sold, helps consumers to choose more ethical products that fit within their budgets and help them vote for a brighter future with their dollars.

“If we exercise our power over certain things, like what we buy, we’ll really see the good the collective mind can do. And I think that translates beyond just food; it’s in artistry and makeup, too.”

The anniversary line brings elegance and artistry together in vegan shades like the Everlasting Glimmer Veil in Gold Skool, Studded Kiss Lipstick in Santa Sangre, or the Metal Crush Extreme Highlighter in Gold Skool, the new limited-edition Eye Shadow Palette, and there’s even a new Golden Brush Collection.

“It’s a very exciting time,” Von D says. “Things that were once considered scary or unachievable, things people were critical or judgmental about, are really being embraced now.”