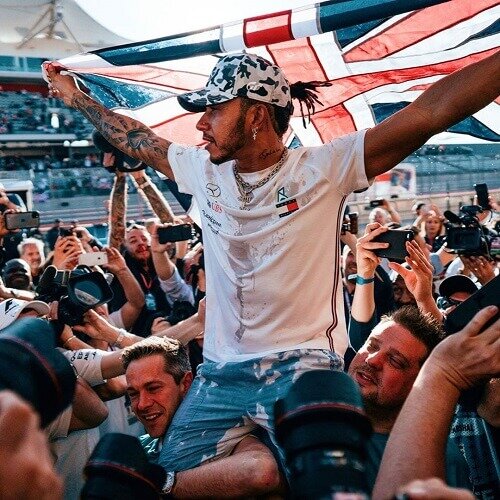 Hamilton described the months leading up to his victory as among the toughest the team has experienced. He won two out of seven races compared to eight wins in the first 12 and experienced a personal loss. Niki Lauda, a three-time champion who acted as an advisor to Mercedes, died last May. Hamilton paid tribute to Lauda after his victory: “It’s been the hardest year for us as a team. We lost Niki this year, a real crucial and pivotal member of our team.”

He also referenced the death of 22-year-old Formula 2 driver Anthoine Hubert, who was killed in a crash at Spa-Francorchamps last August. Hamilton said that the deadly crash, which he saw on television, made him reflect on his career. “I still want to spend time with my family, I still want to have a family one day, all these different things,” he said. “But I’m so charged to do and I love doing what I do so much, that I don’t think there’s a lot that can particularly stop me in that sense.”

Despite struggles, Hamilton believes that it’s been his best year. And he aims to get better: “I’m working on a masterpiece and I haven’t quite finished it yet, so I’m trying to understand. It takes a long time to master a craft and, whilst I feel like I am mastering it, there’s still more to master, still more to add to it, more pieces to the puzzle to add, more ups and downs along the way.”

Hamilton adopted a plant-based diet in late 2017 after watching the documentary “What the Health,” directed by Kip Andersen and Keegan Kuhn. But, the British driver soon turned to social media to be a vocal advocate for animals. Last month, he urged his 13.1 million Instagram followers to go vegan, describing it as “the only way to save the planet.”

“Extinction of our race becoming more and more likely as we over use our resources. The world is a messed up place. World leaders either uneducated or don’t care about the environment at all,” he wrote.

The six-time champion served as an executive producer for James Cameron’s new documentary, “The Game Changers,” which launched on Netflix last month. The film reveals how athletes can thrive without meat or dairy, contrary to popular belief.

Earlier this year, Hamilton invested in the new vegan burger chain, Neat Burger. The first location opened in London last month, but the 34-year-old hopes to open at least 100 more within the next six years.

The 2019 season wraps up with races in Brazil and Abu Dhabi. Hamilton said he intends to focus on winning. Only after that will he be able to relax: “Usually the reflection comes at the end of the year when work finishes and you can just take a load off and just sit back and have a beer. I will be with my dogs, with my feet up and just only then can you have a moment to grasp how great a year it has been.”