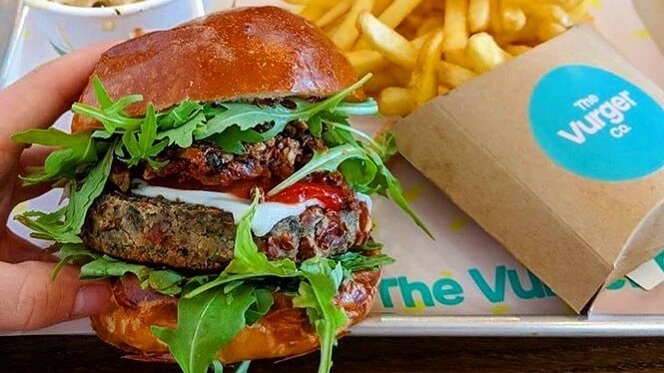 Shoreditch-based vegan burger joint The Vurger Co is gearing up to open its second location in London’s Canary Wharf neighborhood. The plant-based fast food restaurant also has its sights set on expansion to the Middle East and beyond.

Co-founder Rachel Hugh told LIVEKINDLY in an email that following their first crowdfunding round in 2017, she, along with co-founder Neil Potts, began reaching out to investors, who understood their mission and saw the potential for growth.“Going forward, our second location opens in Canary Wharf in around 3 weeks time, we open as part of the site’s new Wharf Kitchen based in Jubilee Place which is a very exciting step forward for us,” she said.

News of The Vurger Co’s upcoming expansion closely follows the announcement that it recently received £600,000 from investors in order to open its second restaurant. Funding will also be used on “exciting projects” which are under wraps for the time being.

“We definitely see the Middle East as one of the key markets for the growth of The Vurger Co,” Hugh added. “Ultimately we aim for global expansion, but we’re working one step at a time.”

The funding was also used to appoint professional chef and YouTuber Gaz Oakley as executive chef. Oakley is the creator of the successful vegan cooking channel Avant Garde Vegan and has authored two cookbooks, “Vegan 100” and “Vegan Christmas.” Earlier this month, the chef partnered with Japanese-inspired chain Wagamama to launch a bowl featuring BBQ seitan, king oyster mushrooms, veggies, rice, and a vegan egg. “We are proud also to have Gaz on board,” said Hugh. “He really understands our vision and what our customers want to see from us going forward.”

Burger ✅ sweet potato fries ✅ Gaz personally delivering it ☝?✅ ? isn’t this what we all need on a rainy day? ☺️(ok everyday)! Well we can definitely sort you out with the first two on the list, unfortunately @gazoakley is on his book tour ?? thanks so much for your amazing response on what you’d like to see from us next in our stories ? some INCREDIBLE ideas ?all will be revealed ❣️ have a fantastic day ?????? photo captured by @peterosullivan_ ?? * * * #burgersandfries #fries #sweetpotato #veganburger #auburger #burgermania #vegansofig #instafood #foodie #foodlover #londoneats #eastlondon #shoreditchrestaurants #shoreditch #veganburgerandfries #foodshare #veganfoodshare

The Vurger Co, which specializes in “soul-satisfying burgers,” aims to “revolutionize fast food through the power of plants,” according to its website. Co-founders Hugh and Potts launched the concept as a pop-up in 2016. Its plant-based burger patties are made from a blend of smoky aubergine, chickpeas, onion, and jalapeño, relying entirely on vegetables and pulses rather than vegan meat substitutes.

According to Big Hospitality UK, the pair launched a crowdfunding campaign through Crowdcube in summer 2017, seeking to raise £180,000 in order to open its first location. “After an inspiring trip to California, being exposed to just how delicious and accessible plant-based food can be, we realized London was really lacking a mainstream plant-based fast food business,” said Potts.

The pair quickly realized that there was high demand for vegan burgers in London. According to the crowdfunding page, in May 2017 The Vurger Co sold 1,148 vegan burgers, highlighting the restaurant’s potential for mainstream appeal. Earlier this week, the pair announced that their restaurant had been finalized for “People’s Champion” at the annual Startups Awards, which shines a spotlight on entrepreneurs in the UK.

The Vurger Co’s Canary Wharf location is set to open in three weeks time. Voting in the Startups Awards closes on November 11.