(Updated June 21, 2019). Akashinga, meaning ‘the Brave Ones’, is a conservation model by the International Anti-Poaching Foundation. It is powered by a strong team of disadvantaged women. While “working with rather than against the local population”, the aim is to protect wildlife and wilderness areas. The project provides an alternative to poaching and at the same time, supports local communities in their efforts to protect endangered animals in Africa.

Currently, trophy hunting regions consume one-sixth of land in participating countries. In the last two decades, the lion population in Africa has fallen 30%. Similarly, rhino populations have seen a decline from half a million to a mere 5,000. Thankfully, increasing awareness has resulted in a decline of the industry. However, this has left a space within communities who have previously relied on income from trophy hunters. That’s where Akashinga comes in.

Armed with rifles suitable for close-quarter combat (yet with enough precision to bring down enemies at 500 meters), the group operate in Zimbabwe’s lower Zambezi Valley- Africa’s poaching frontline. The goal is to provide a “solution to the end of hunting”, as reported by the Guardian, as well as solving social problems on a local level. The Guardian explain that “these women are a growing squad of environmental shock troops for a new type of community development offensive”.

Founder of Akashinga, military-trained sniper Damien Mander, lives on a vegan diet along with all of his rangers. Mander first turned to veganism when he felt the “hypocrisy” of “protecting one group of animals and coming home and eating another.”

The team members have embraced the change. Field Ranger and single mother Vimbai Kumire says, “It’s great… I don’t miss meat at all”.

A nutritious diet is vital for the work being done, as training for Akashinga is modelled around strenuous special-forces training. The founder admitted that he “used to believe women had no place in the military”.

Mander, who has trained thousands of men, explained: “I did selection for 189 men… at the end of the first day, three were left”. When it came to the female recruits, he revealed, “We pushed them hard, much harder than any traning we do with men”, yet out of 36, only three dropped out.

And the women may be more effective, too. “After years of training male rangers, he concluded that in some ways women were better suited for the job,” National Geographic reports. Mander says he found women were “less susceptible to bribery” from poachers and “more adept at de-escalating potentially violent situations.”

Mander points to research done in developing countries that shows working women are significantly more likely to value conservation: women invest 90 percent of their income in their families, compared with just 35 percent for men. “In this regard, the rangers demonstrate a key conservation principle: Wildlife is worth more to the community alive than it is dead at the hands of poachers.” 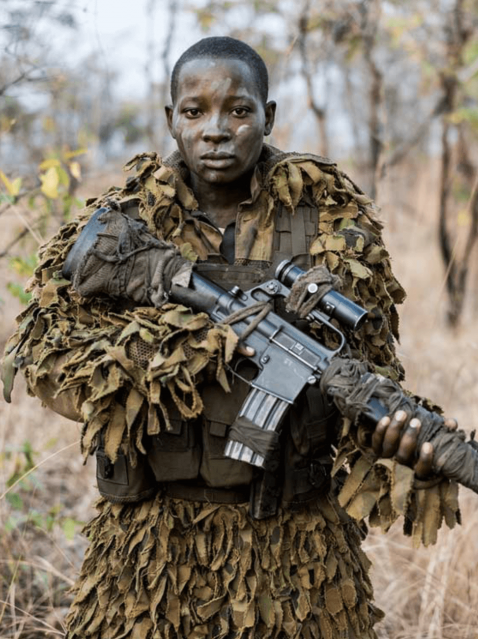 Women are working to stop poachers in Africa.

“We put them through hell, and they just kept smiling and coming back harder and harder.” He added, “I couldn’t believe it”. Field Ranger Kumire stated: “This job is not meant just for men,” she says, “but for everyone who is fit and strong”.

21-year-old Primrose Mazliru is now a Field Ranger, after her abusive ex-boyfriend left her while pregnant. She managed to finish her high school education with her self-earned salary while training with Akashinga. “I have developed as a person,” she explains, “I have the respect of my community”.

Developing conservation skills within communities “creates more than just jobs”, by saving animals but also whole ecosystems. Roughly four million people live on the outskirts of hunting zones and therefore rely on profits from hunters. However, in some scenarios as little as 3% of hunting income is given to communities. Contrastingly, in just five months, Akashinga has put more money per month into the local community than trophy hunting did in a year. In fact, 72% of operational costs go directly into the community.

Conservation biologist Professor Victor Muposhi believes a shift toward plant-based eating stops poaching, animal farming in the wilderness and habitat loss. While the lower valley alone has lost over 10,000 elephants in the past decade, Muposhi believes Akashinga is a “game-changer”. He names it “the beginning of a bigger and greater movement”.

Akashinga is argued to be more sustainable than any other conservation plan. It is rooted in female empowerment, supported by veganism, and benefits populations at a community level. Restoring wilderness and protecting wildlife, these Brave Ones may be the end to hunting that Africa needs.