You can now get vegan fish and chips at Marks & Spencer. The new ready meal is part of the chain’s Plant Kitchen range.

“Veganism is a trend that we are absolutely loving at M&S,” said April Preston, director of product development at M&S, said in a statement. She added, “As our customers continue to experiment and adopt more flexitarian diets, we too are having fun creating new products to fit within this.” 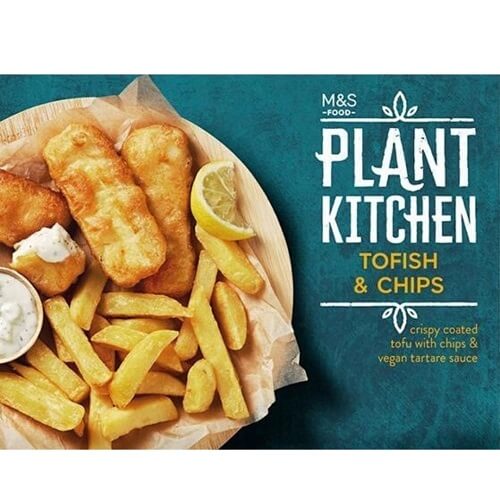 Marks & Spencer isn’t alone is offering vegan fish and chips — many major supermarkets have launched their own ranges, including Tesco and Waitrose. For the latter, the new fish-less cakes became a top seller after the launch. Quorn, Linda McCartney, and Gardein vegan fish are also available in supermarkets.

Vegan spins on traditional fish and chips shops are also on the rise. In October 2018, London-based restaurant Sutton & Sons converted its Hackney store into a completely vegan establishment. The family-run business had originally added fish-free fish to the menu at all three locations. Due to its popularity, the Suttons decided to turn one of their three restaurants vegan.

Fish and their habitats are in danger due to overfishing, according to research. A study released last July by marine conservation charity Our Fish revealed that overfishing and climate change are connected. Warming ocean temperatures interfere with fish reproduction. According to the Food and Agriculture Organization of the United Nations, overfishing and habitat destruction have depleted around one-third of global fish stocks.

Reducing fishing and establishing marine reserves could lessen the effects of climate change, according to lead author Rashid Sumaila, a professor at the University of British Columbia’s Institute for the Oceans and Fisheries: “If you have a system that is already on its knees and then you have another pressure that is hitting it, like climate change or overfishing, that will make the stock less resilient. If you are very healthy, you have more ability to withstand the stress.”

M&S’s vegan fish and chips is now available in stores and retails for £3.50 per meal.