Demand for vegan food and plant-based meat is growing in the Middle East and Africa—particularly within the United Arab Emirates (UAE).

Market research company Triton expects an additional upsurge in the Middle East and African vegan meat market in the coming years. It predicts a compound annual growth rate (CAGR) of 9.84 percent between 2019 and 2027.

Growing consumer demand is primarily motivated by health, though the environmental and ethical impact remains a factor.

In Saudi Arabia, the key driver of the vegan market is a growing national awareness of health and diet. According to Triton, this could be related to increasing levels of obesity—one of the leading causes of death in the country.

The Vegan & Vegetarian Association of Turkey consistently promotes a vegan diet. While several recent, regional festivals—including one in Didim—have also helped further the popularity of veganism. Many of the traditional regional and national dishes, such as couscous, falafel, and hummus, are naturally meat-free and vegetarian already. 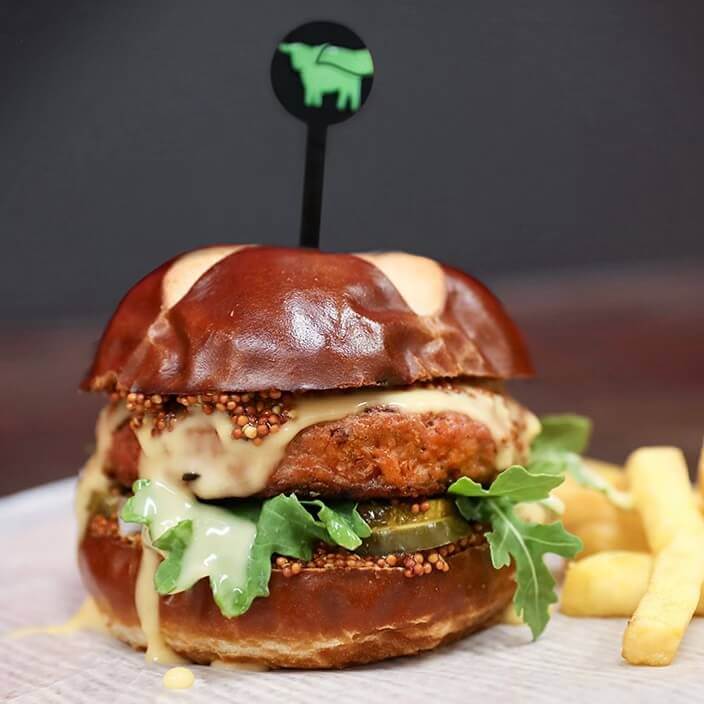 Bareburger in Dubai serves the Beyond Burger.

Vegan Meat in the UAE

The UAE is increasingly vegan-friendly. In 2018, Bareburger locations in Abu Dhabi and Dubai launched the plant-based Beyond Burger. While Applebee’s in Dubai serves vegan B12 burgers made by UK-based brand Moving Mountains. In 2019, Veganity—which first opened in Dubai in 2017—became the world’s largest plant-based restaurant.

Triton lists Beyond Meat, VBites, Cauldron Foods, and Tofurky among the brands becoming “major players” in the Middle Eastern vegan market. While UAE-based brands, such as frozen food company Healthy Farm, also aim to cater to the changing market.

“We are no longer in the experimental stage where plant protein food sources are a gimmick or something quaint,” said Jacek Plewa, the brand’s general manager. “These alternatives are impressively gaining preference across the globe. Consumers recognize the tangible impact left by nutrition choices on health, wellness, the environment, and animal welfare.”