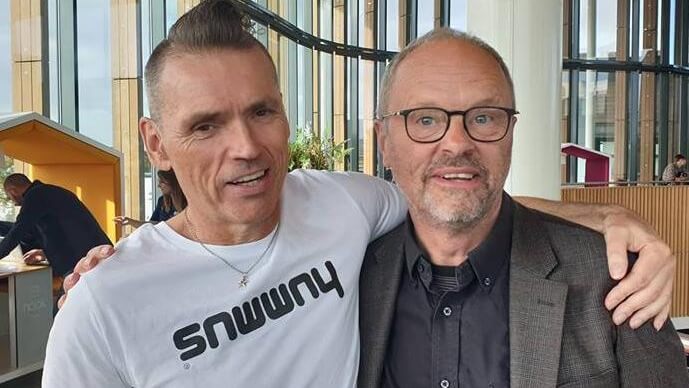 The clothing range – named 1889 after the year the team was first formed – is the club’s second collaboration with artist collective AnyForty and is made from environmentally-friendly and ethically-sourced materials.

The new range includes t-shirts, a hoodie, a scarf, and a temporary tattoo sheet, and as a nod to the fact that FGR is the world’s first-ever vegan football club, the team has also released the “Hummus Tee” – which chairman Dale Vince has recently been seen sporting.

“We’re super proud to continue our relationship with Forest Green Rovers by following up our first collaboration last year with a whole new lifestyle brand, 1889,” said Alan Wardle of AnyForty in a statement.

Designed by Sydney-based artist Dale Bigeni, the 1889 x AnyForty range includes the lion and unicorn from the club badge, as well as the Green Devil mascot, which highlights the club’s green, eco-friendly ethos.

<Swipe> Here’s another look at one of the garments from our new collection we’ve created for our friends at @fgrfc_official Our man from Sydney @artbydale really went to town on this set. This design see’s the unicorn that’s on the FGR crest alongside the lion come to life on the front chest of a super soft organic pullover hoodie and on the back is the lion. Smashed it! This design and others are now available from the FGR shopify store so pick em up quick, or if you’re in the South West, pop along to the New Lawn Saturday 20th and grab some goodies from the brand new club shop. #anyforty #anyfortytheagency #art #illustration #design #branding #apparel #streetwear #fashion #graphictees #forestgreenrovers #skybetleaguetwo #vegan #ecotricity #football #soccer #merchandise

“Dale’s fine bold lines, clever detailing and his tattoo influenced style of drawing is a slightly darker and edgier progression from Short’s more light-hearted, fun, character-driven artwork from our first collection,” Wardle continued. “Yet doesn’t feel too departed from the solid flat colours and style we know the FGR fans have enjoyed.”

He added, “We’re also really excited to see if any Forest Green Rovers fans will take some of this tattoo influenced artwork from fabric to skin!”

Owned by Vince, who is also the founder of vegan electricity company Ecotricity, FGR was officially recognised as the world’s first vegan football club in 2017.

Since then, the club has continued to promote a message of sustainability and encouraged its fans to follow a plant-based lifestyle; ealier this year, it even recieved a carbon-neutral certification from the United Nations. In September, the UN honoured FGR once again, with the “Momentum of Change” climate action award.

After recieving the award, Vince said, “Plenty of people doubted we could make this improbably combination of a football club and the environment work, but it’s proven to be a powerful combination.”