Four-time Formula One champion Lewis Hamilton has claimed first place in the German Grand Prix. On the day of his win, the British athlete posted about veganism online to his almost 7 million followers, urging his fans to “Go Plant-Based!”.

Hamilton competed in the biennial German Grand Prix yesterday in Baden-Württemberg, Germany. Though he started from 14th place, the plant-powered athlete managed to beat out his rival Sebastian Vettel to claim first, ultimately placing himself at the top of the standings for the 2018 Formula One after winning three other Grand Prix events earlier this year.

Wow, I wish I could describe this feeling right now… What a day, true proof that you should never ever give up!! The team did such a great job as they always do, I can’t thank them enough! I kept the belief and it came true. A big, big thanks to God ?? #Godisthegreatest #StillWeRise #GermanGP #F1 #TeamLH @mercedesamgf1

On the day of his latest win, when much of the sporting world had their eyes on Hamilton, the driver took to Instagram to speak out about veganism. On his Story, Hamilton shared an image of a cow with the text, “619 million humans have been killed through wars in our entire recorded history. Humans kill the same number of animals every five days…”

Below the image, Hamilton wrote, “Guys, I’m on a plant-based diet and have been for a year now,” adding that he feels “better than ever.” He urged his followers to “take notice and not turn a blind eye.” He concluded, “Please find it in your heart to not support this horrific cruelty and go plant-based!” 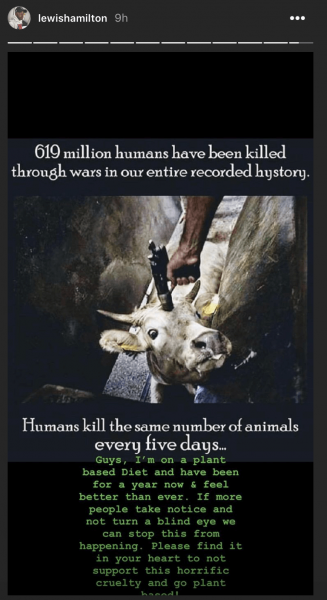 The Formula One champ has encouraged his followers to ditch animal products before, even updating his Instagram bio to say, “Plant-Based Diet. Love Animals.” While animal welfare is a clear driver for Hamilton’s dietary choice, the physical benefits of the lifestyle also contribute. “I feel the best I’ve ever felt physically and mentally,” he told City A.M. late last year. “All year I’ve felt very strong mentally but I think physically I’m now taking also a big step and that’s really the decision I made to change my diet.”

The month following, he spoke to CNN about the influence of his plant-based diet on his success. He told the publication, “I do feel the best I’ve ever felt in my life, in my 32 years, physically. I feel incredibly clean and healthy.”