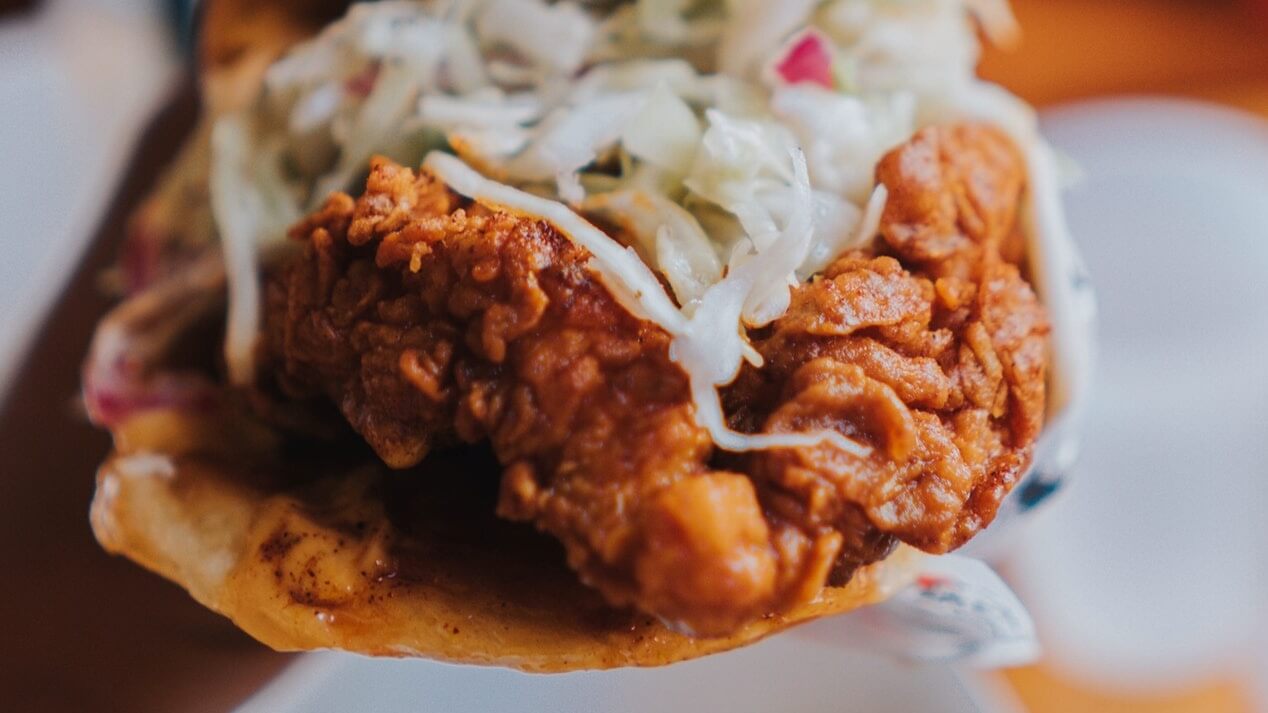 Despite the fact it was the only vegan vendor at the New Orleans festival, Atlas Monroe made quite an impression on Grim.

Grim was tasked with sampling and reviewing the range of fried chicken from all 35 festival vendors. He wrote that “all the dishes [were] pretty good,” making the competition tough. However, Grim declared that Atlas Monroe’s vegan chicken reigned supreme as the tastiest dish.

The meatless dish is made entirely from wheat protein and covered in a batter flavored by a signature blend of spices. “The thigh and drumstick were super-crunchy and super-tender, even after sitting for a while,”  he reviewed. “The skin was thick, nubby, and crunchier than any fried chicken skin I’d ever encountered. And … it wasn’t even chicken. It was vegan.”

CAN I GET A VEGAN HELL YESSSSSSSSSS TO ALL THIS??!!! ??GIVEAWAY ALERT?? Organic, plant-based chicken fried to BIG EXTRA CRISPY DELICIOUSNESS served w/ warm waffles & loaded with organic coconut vanilla ice cream, strawberries, powdered sugar & syrup… • + #tenderaf ?Apple Wood-Fired Ribs w/ fresh cut Garlic Fries – where they do that at?? SAN FRANCISCO BREWFEST & VEGAN EATS FESTIVAL @sfbve_ – nexxt Saturday OCTOBER 13TH??Giving away tickets + discount code ATLASMONROE for $5 off. For a chance to win •1. FOLLOW US @atlas.monroe & @sfbve_ •2. Tag the friends you are coming with •3. Rep yo city BAY AREAAAA! • #tbt to ?? @veganstreetfair ?by the wonderful @johnkasum ???

He went on to praise the vegan dish as “the most enjoyable fried chicken” and called it a “meatless wonder” that was a hit with all of the judges. “Atlas Monroe’s plant-based food will convert any fried chicken traditionalist,” he said.

Deborah and Jonathan Torres, the founders of San Francisco-based Atlas Monroe, shared their excitement via Instagram. “I woke up this morning SCREAMING,” the post read. “I’m getting emails and texts from strangers and friends all over the world announcing their congrats and cheering us on.”

The chefs also raved about the future of plant-based eating when speaking to Grim. “If you can eat big, juicy, extra-crispy pieces of succulent and flavorful fried chicken without harming any animals using a hundred percent organic and fresh ingredients, why wouldn’t you?” Deborah asked.