By Vancouver With Love
Jump to recipe

Rhubarb is one of my favorite fruits. There’s nothing like enjoying a bowlful of stewed rhubarb to remind you that summer is just around the corner.

I say fruit, but if you haven’t cooked with it before there is one thing you need to know about it. Rhubarb isn’t at all sweet! This is one reason I like to pair it with other, sweeter fruits like apples or strawberries. It has a very distinctive (and delicious) sharp, almost tangy taste, but if you’re using it alone, make sure you add a sweetener. I like using maple syrup or coconut nectar, but sugar would work too.

On to the recipe for this vegan, gluten-free Rhubarb and Apple Crumble! I grew up in a household where crumbles (or crisps) made with apples from our tree were the usual dessert. Rhubarb would sometimes get thrown into the mix too.

I enjoyed them but thought they were nothing exciting as I was used to eating them all the time. It’s only now as an adult that I’ve really developed a taste for the foods I ate growing up.

Adapting my mother’s original crumble recipe to one that incorporates the way I eat these days (whole food and vegan, without gluten or refined sugar) has been a surprisingly easy and enjoyable task. Crumbles lend themselves naturally to a wholefood lifestyle, and are extremely simple and satisfying to make (and eat!).

This Rhubarb and Apple Crumble pairs delicious seasonal fruits—which compliment each other perfectly—with almonds and oats. The result is a deliciously comforting and rich, yet nutritious dessert. Enjoy it paired with a scoop of vegan vanilla ice cream or a scoop of coconut whip—or both, why not? 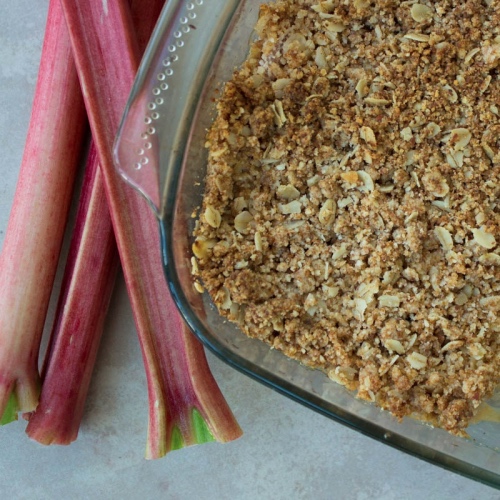 If you’d prefer not to use oats, simply substitute them for ½ cup brown rice flour instead.

For a nut-free option, simply omit the ground almonds and replace with an extra 1½ cups oats.

For more decadent dessert recipes, try making these vegan carrot cake flapjacks with dairy-free cinnamon frosting! According to the recipe’s author, “the grated carrot makes the flapjacks so moist whilst the cinnamon and vanilla add a warm and sweet flavor. The cinnamon drizzle adds a little extra flavour to these so I would recommend doing this step!”

This recipe was republished with permission from Vancouver with Love.