As fans of HBO’s epic fantasy series “Game of Thrones” will already be aware, the sun is about to set on the much-loved highly-addictive medieval tale, with the eighth and final season to air this April.

Rumors are already circulating about what the last six episodes will bring; who will be the most prominent characters? Who is set for a dramatic and unexpected return to the series? This is all unconfirmed. However, what you can rely on is the beverage you’ll be sipping on while you soak up all the fantasy drama.

New York-based vegan-friendly brewery Ommegang has teamed up with the HBO network to create a line of beers especially for Game of Thrones fans– if you want to go all out, you could even drink it out of the brand’s own Game of Thrones glass.

Most of the beers have already been released, however, its final limited-edition beer for the show will be launched in April. Vegan-friendly scotch whiskey brand Johnnie Walker has also joined in on the hype, offering it’s very own limited edition Game of Thrones-themed whiskey.

Here is all the Game of Thrones booze you need to see you through the final season and help you numb the pain of saying goodbye to the Seven Kingdoms of Westeros forever. Until you decide to start watching the whole thing again, that is.

1. For the Throne Co-Fermentation Beer 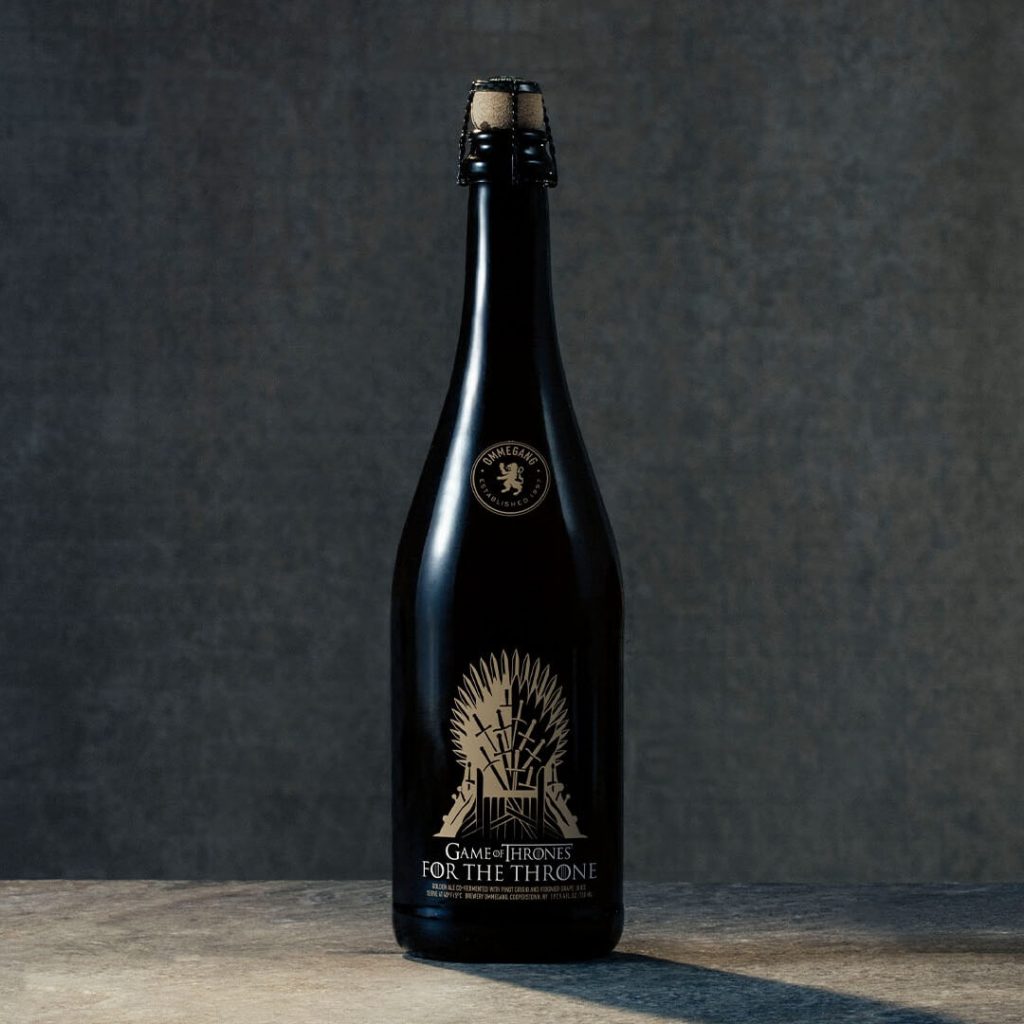 “For the Throne,” a co-fermentation beer, is being launched especially for the eighth series. The 9.5% ABV ale has been co-fermented with pinot grigio and viognier grape juices, to make a beverage that truly is “fit for royalty.”

According to Ommegang, the new beer — which is the brand’s first co-fermentation product of the year — will be available nationwide from the beginning of April, just in time for the final season.

“Winter is here, the wall has fallen, and the final battle for Westeros is underway,” said Ommegang president Doug Campbell. “With this offering, we have bent the traditional boundaries of beer-making, co-fermenting traditional ingredients with juices normally destined for fine wines, going to great lengths to create a truly unique, special beer.”

Jeff Peters, the vice president of licensing and retail at HBO, added, “in the course of planning out the next beer in our amazing collaborative partnership with Brewery Ommegang we asked the brewers ‘what would Ommegang do for the throne?'”

The brewery’s response, according to Peters, was to brew “this exciting and innovative co-fermented beer.” He said, “every bottle, every pour, every toast, every sip… For The Throne!”

2. King in the North Imperial Stout 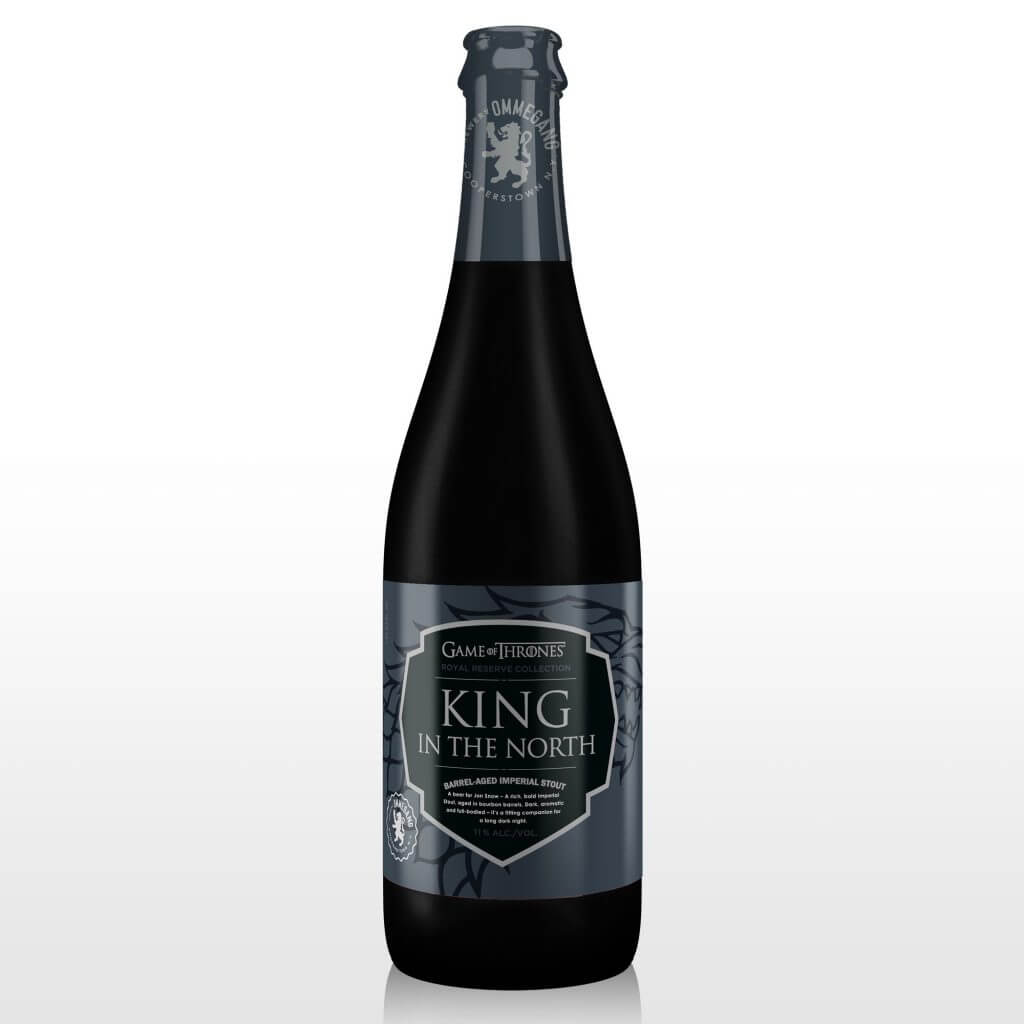 Released back in November, the King in the North barrel-aged imperial stout is a beer developed for Jon Snow, according to Ommegang. The company notes that the 12% ABV beer was brewed for 6 months in a barrel to create a beverage fit for the king.

Ommegang notes on its website, “dark and brooding imperial stout has always been bold enough for normal times, but now that winter is here, something bigger and older is needed for the long, dark night.” It continues, “Thus, we enlisted the help of barrels and time to produce King in the North, a rich, bold, barrel-aged imperial stout, unlike anything we’ve brewed before.”

Campbell added, “We expect this one to bring our fans to their feet to toast the King in the North!”

3. Hand of the Queen Ale 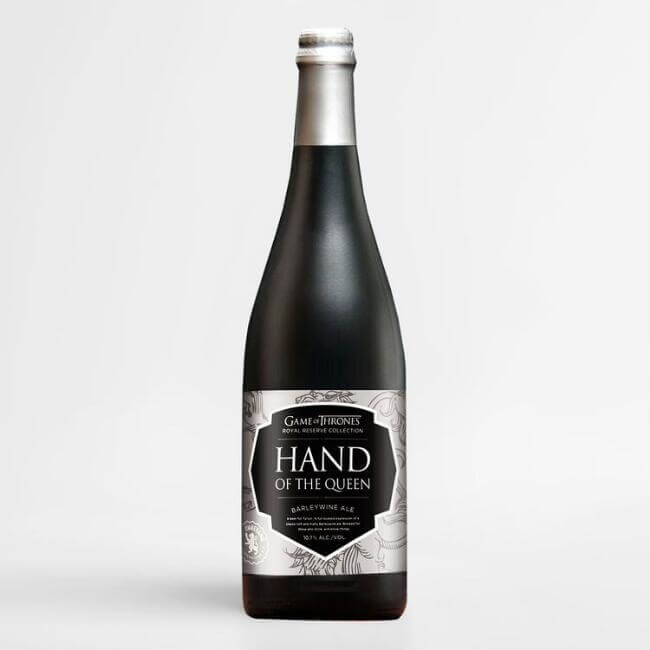 Hand of the Queen Ale | image/Ommegang

This barleywine ale — brewed with Scottish ale yeast, also by Ommegang — was created specifically with Tyrion Lannister in mind; it has “intense flavors” of brandy soaked raisins and dark fruits.

“As one who knows and loves wine above all, and as his court brewer, we would brew him one,” says Ommegang. “Hand of the Queen is a big, bold barleywine fit for those who seek knowledge and truth both great and small.”

Initially launched in 2018, Lannister’s honorary beer is 10.7% ABV, according to Ommegang, and is available in stores across the United States.

Campbell said of the release at the time, “While technically not royalty at all, Tyrion certainly qualifies as a nobleman in our esteem.” He added, “we’ve wanted to brew for Tyrion for six seasons, and we believe his time has come. Knowing his preferences, our beer for Tyrion could only be a barleywine.” 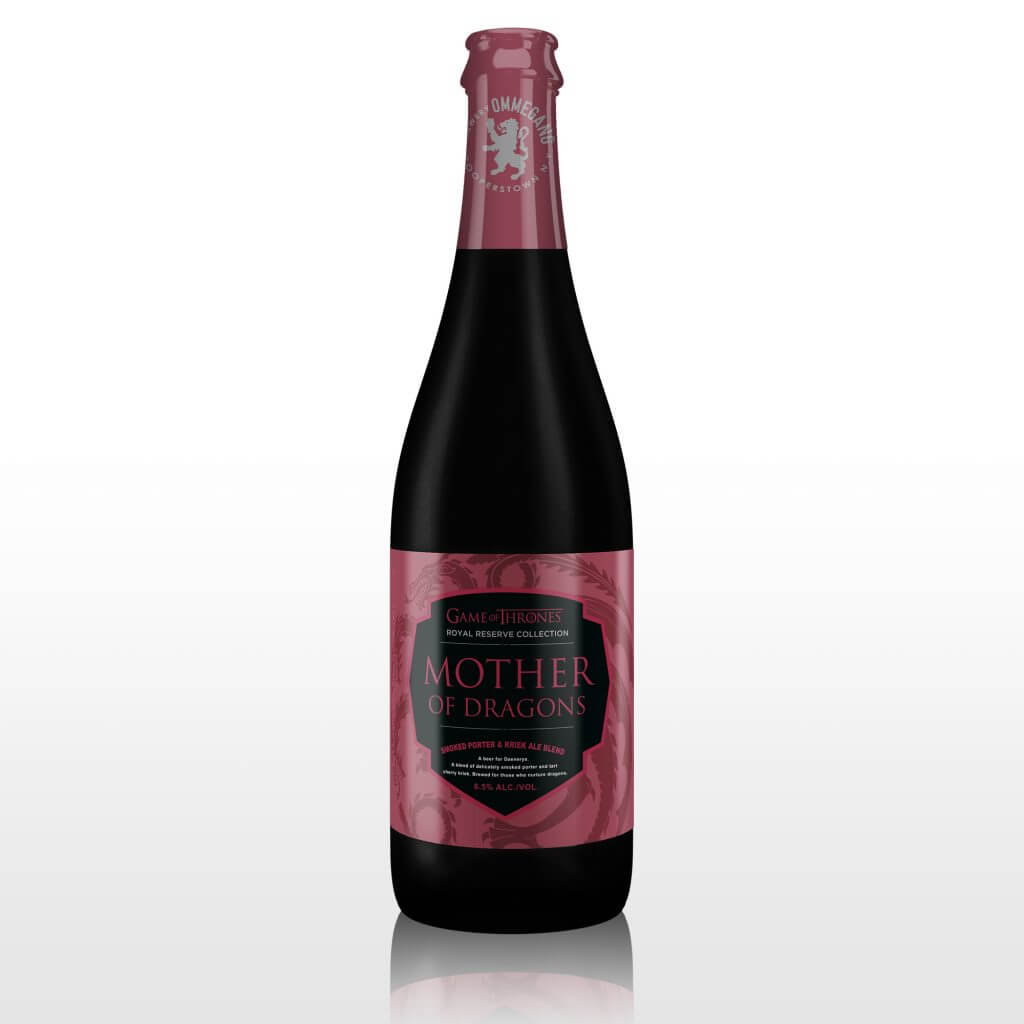 Released across the United States last fall and made with Ommegang house yeast, 6.6% ABV Mother of Dragons is a blend of smoked porter and kriek ale, created with Daenerys Targaryen in mind.

According to the company, the beer has aromas of chocolate covered cherries, and the mouthfeel is “luxuriously creamy.” It would pair well, Ommegang notes, with rich indulgent chocolate cake.

The company notes, “this blend of a smoked porter and a Belgian kriek represents the smoke and fire that Daenerys has unleashed on her opponents during her ascent to conquer and rule the seven kingdoms.”

Campbell added that this beer represents the fiery spirit of Targaryen. “Daenerys’s ascent from obscurity has been one of the most inspiring storylines of the show,” he explained. “We’re thrilled to release a blend that embodies the character traits that have underpinned that rise.”

5. Queen of the Seven Kingdoms Sour and Blonde Ale Blend 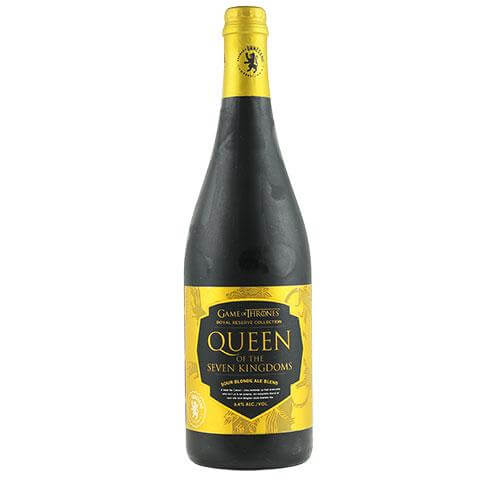 Available from last summer across the United States, the Queen of the Seven Kingdoms is an “exceptional blend” of Belgian sour ale and Belgian-style blonde ale, according to Ommegang. It has aromas fruity aromas of melon and citrus and would pair well with pumpkin pie or an apple tart notes the brand.

The 6.6% ABV beer was inspired by Cersei Lannister, the Queen of the Seven Kingdoms herself. Campbell notes, “Cersei is a complex character, and we’ve tried to emulate that profile with this beer, which blends a lovely, dry blonde ale with a subtly tart Belgian sour.”

“When we set out to create the Royal Reserve Collection, we knew we had to pay homage to the character currently sitting on the Iron Throne,” he added. “We’re very happy to present this tribute.” 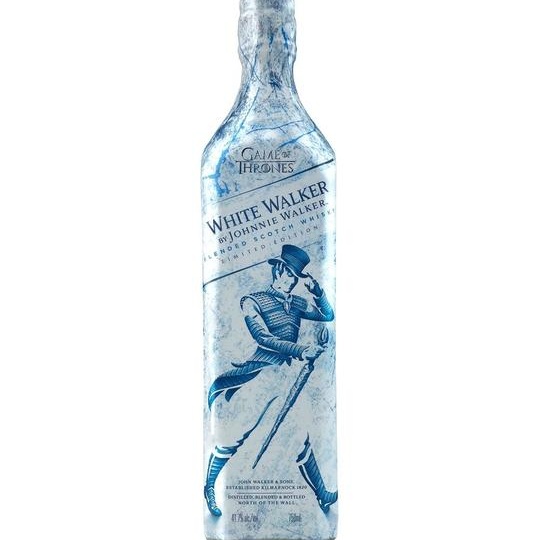 The bottle design — “strongly influenced by the cold white mist that covers the Far North of Westeros” — even changes to reveal a hidden design when it gets cold.

The brand notes, “chill-filtered for an extraordinarily smooth and approachable flavor, Johnnie Walker White Walker Blend Scotch Whisky offers incomparably rich seasonal flavors of vanilla, red fruits and orchard fruits that are perfect for sharing at the next premier, finale, or any occasion.”

The White Walker whiskey is available online from a variety of stores, including Reserve Bar and Amazon. 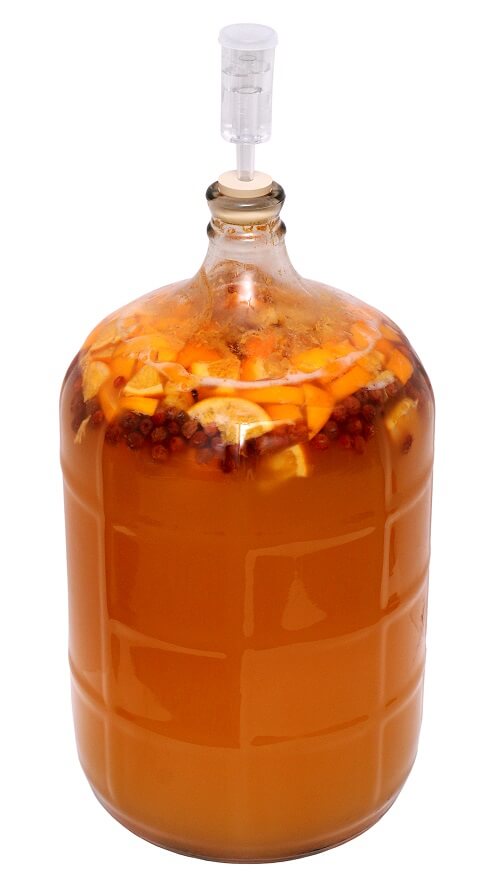 Hardcore fans can make their own vegan mead, the beverage-of-choice on “Game of Thrones.” Traditionally, this medieval alcoholic beverage is made fro honey fermented with hops, spices, fruit, and grains. It can be made vegan using agave instead, as in Vegan Crunk’s recipe.  According to home mead-brewers from Got Mead, rice syrup or fruit can also be used.