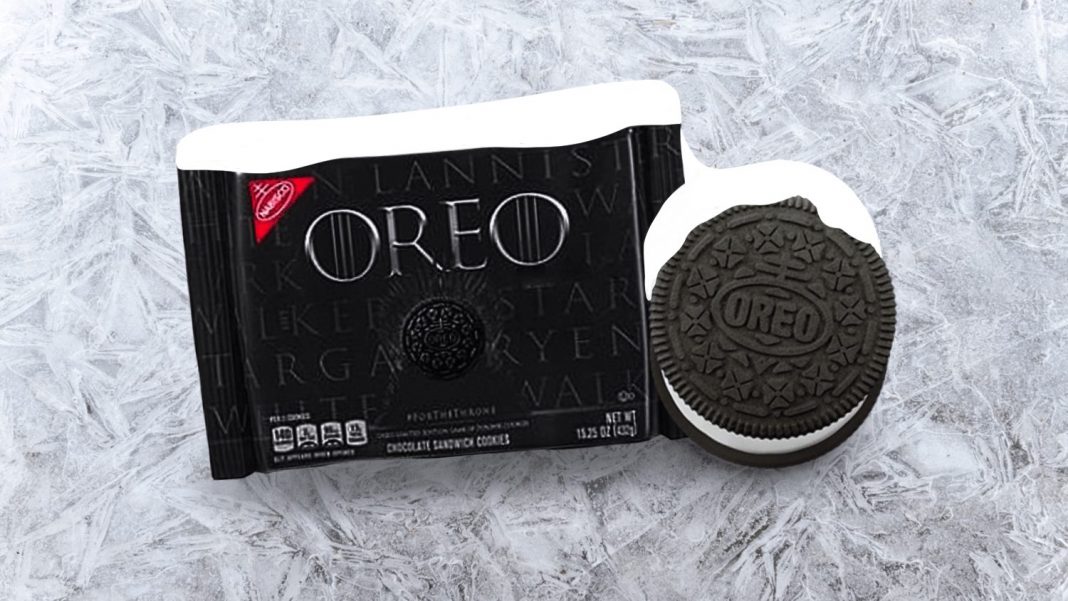 The eighth and final season of HBO’s “Game of Thrones” is coming – Oreos launched limited-edition cookies to celebrate.

The iconic cookie company posted a teaser last February hinting at the GoT Oreo’s arrival, which are available in major retailers nationwide now.

The GoT Oreos don’t have special flavors, but the cookies are embossed with the sigils of House Stark, House Targaryen, and House Lannister, plus the Night King.

When you play the #GameOfCookies you pledge your fealty on oreo.com. #ForTheThrone

Oreo has churned out limited-edition cookies by the truckload over the past year and apart from the occasional addition of dairy, all flavors have been vegan. Last May, the company launched a trio of spring-themed cookies: Kettle Corn, Cherry Cola, and Piña Colada. Around Valentine’s Day this year, pink creme-filled “Love, Oreo” cookies were available.

This year’s other limited-edition Oreo flavors include the vegan Dark Chocolate and Carrot Cake Oreos. The popular S’mores flavor, consisting of chocolate creme and gelatin-free marshmallow stuffed between two honey-free graham cracker cookies, is returning for the first time since May 2015.

Vegan Stars in ‘Game of Thrones’

The final season of GoT is expected to be big, but not only because it’s the last in the series. The eighth season will reveal details that “A Song of Ice and Fire“, the book series by George R.R. Martin that the show is based on, has yet to reveal.

All three stars have spoken up for animals on separate occasions. Dinklage is a strong advocate for dog adoption who has worked with organizations such as Farm Sanctuary, PETA, and Cruelty Free International over the years.

Emmanuel is an animal lover who has warned fans about the abuse behind elephant tourist attractions in Thailand. She also collaborated with The Body Shop on its campaign to end animal testing. Flynn has worked with PETA on an ad about the myth behind “humane meat” and is a patron of UK-based animal rights charity Viva!.

The final season of GoT starts on April 14.