Named after the smoke-dried jalapeño chili native to Mexico, Chipotle was founded in 1993 and opened its first restaurant in Denver.

Since then, the chain has opened more than 2,000 branches across the US, Canada, Germany, France, and the UK. At the healthy fast food chain, the diner’s customized dish is assembled at speed before their eyes from a range of salads, grains, and pulses. Altogether, the menu is comprised of 51 ingredients.

Now worth an estimated $12 billion according to The Wealth Record, the chain describes itself as providing “food with integrity,” forming partnerships with many of its ingredient suppliers. The franchise is particularly dedicated to ethically sourced and environmentally friendly food. Chipotle went GMO-free in 2013 and last year, the franchise invested in vegan seafood company Sophie’s Kitchen.

Alongside its commitment to reducing its environmental impact, Chipotle has a firm focus on compassionate production.

“Every choice we make—about who we work with, what we serve, and what we stand for—affects the bigger picture: the health of the planet,” the company notes on its website.

“Nutrient-rich soil reduces the need for pesticides and synthetic fertilizers, buying locally reduces vehicle emissions from transportation, and humane animal husbandry means diminished reliance on antibiotics. As we strive each day to be better, we keep in mind that everything is connected,” it says. 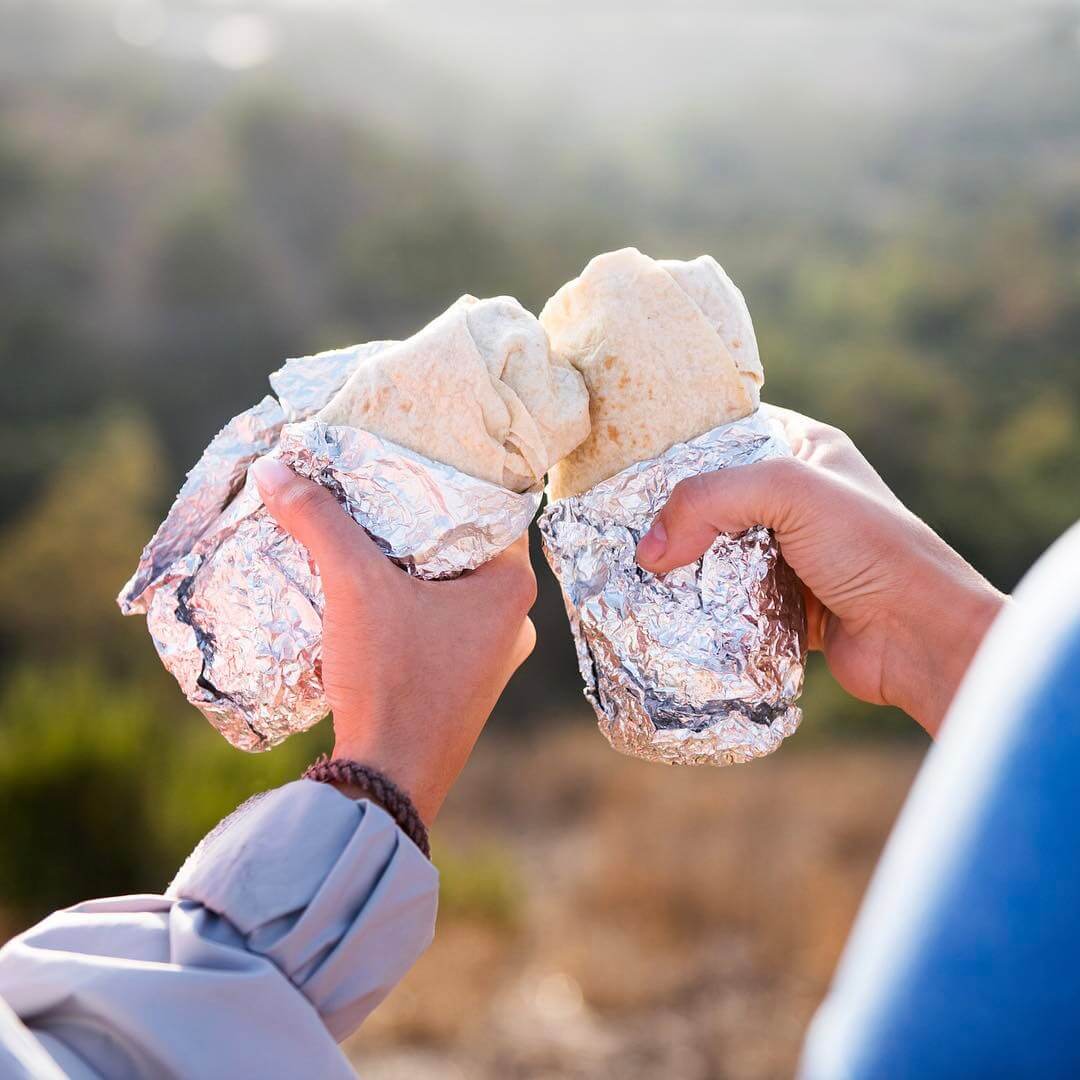 Traditional Mexican cuisine features a lot of plant-based dishes and ingredients. Vegetable-based meals have become increasingly popular in Mexico due to growing rates of veganism; data collected by major Mexican food festival The Gourmet Show suggested that 20 percent of Mexicans identify as vegan or vegetarian.

The classic combination of pulses and grains is a cornerstone of the Mexican diet. Black beans and rice are staples, forming the foundation of many dishes from quesadillas to soup. As so often happens in the dietary sphere, modern day nutrition experts have revisited this traditional way of eating to glean its benefits.

This rice and bean combination has been heralded as an exmaple of perfectly balanced nutrition in recent years. Denise Web Ph.D., RD wrote in her paper Beans and Grains: The Perfect Pairing, “A major benefit of combining beans and grains is the amino acids they provide. Both beans and grains are incomplete proteins, meaning they lack some essential amino acids. Together, they complement one another, provide all of the essential amino acids, and can take the place of high-quality animal proteins.”

Web notes that bean and grain combinations have “a rich history in ancient culinary practices, long before nutrition scientists discovered the health benefits of beans and whole grains or the protein boost provided by combining different plant proteins to get all nine essential amino acids.”

Chipotle’s menu is based upon traditional Mexican cuisine with a modern twist. It is particularly known for “Mission-style” burritos, created in the Mission district of San Francisco in the 1960s. These North American wraps are bigger than other burritos (seriously, getting your mouth around one is a challenge) and are made with large flour tortillas that are jam-packed with fillings. 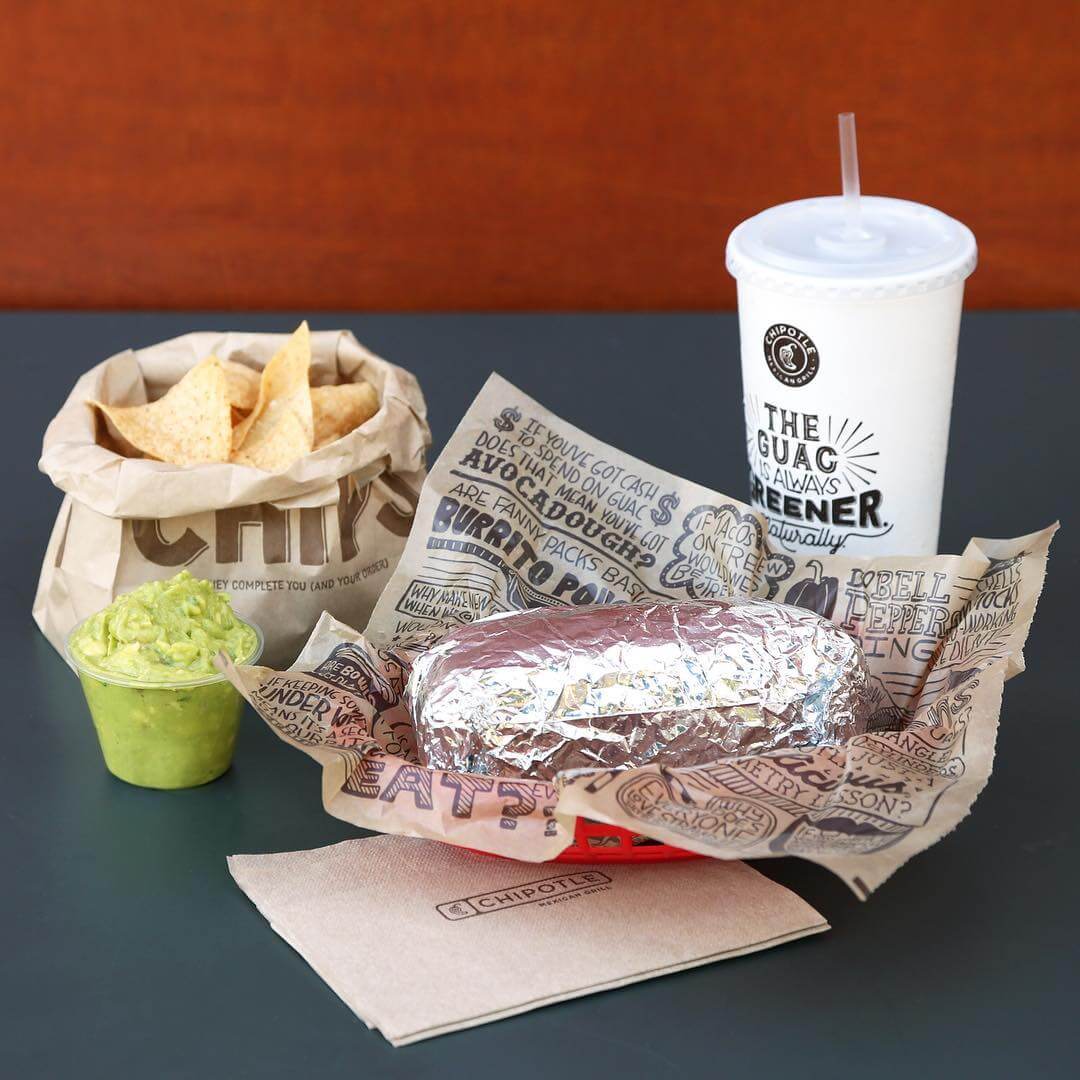 Chipotle gets a gold star for its awareness of dietary preferences. The chain’s minimalist menu is rather vegan-friendly and you can find vegan items marked on the website by selecting the V+ icon as a preference. Another useful site feature is the inclusion of nutritional information for every dish. A swift click onto the main website shows that the franchise is in tune with growing market trends; the homepage encourages visitors to “Go Plant-Powered”. 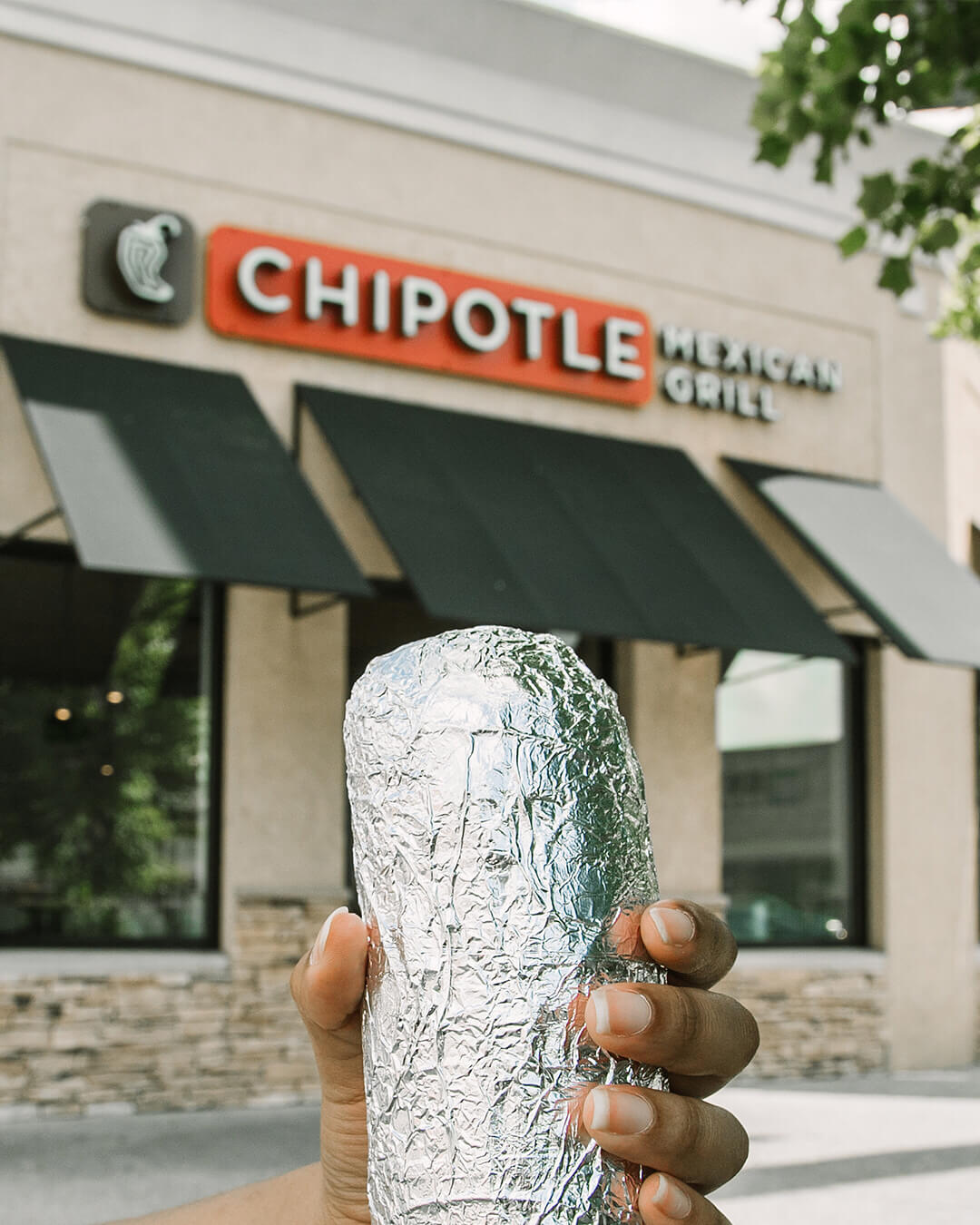 Made to order, Chipotle’s famous burritos all start with a large flour tortilla. Those looking to eat vegan can fill their bread wrap with cilantro-lime brown or white rice and black or pinto beans. Customers can also choose Chipotle’s signature “Sofritas” as their protein source, a crumbly braised tofu flavored with traditional sofrito aromatics, including paprika and oregano.

The Sofritas option was added to all US Chipotle menus in 2013. The savory soy finally made it across the pond to UK Chipotle branches in 2018, where it is nicknamed “the vegan boost.” The tofu for the plant-based dish is supplied by California company Hodo Foods, and is apparently so popular that Chipotle served up 7.5 million pounds of Sofritas last year.

Chris Brandt, chief marketing officer of Chipotle, said in a statement earlier this month, “We’ve found that many people are increasingly looking for plant-based protein options, so we wanted to make it easy for our customers with digital shortcuts for these bowls.”

Brandt added, “Since introducing Sofritas five years ago, Chipotle has provided flavorful options for every lifestyle, while simultaneously doing something good for the planet.”

After choosing a protein (or not, you do you), burrito fans can build their dish from a selection of plant-based toppings. Fajita vegetables consisting of peppers and onions can be added along with romaine lettuce. Four vegan salsas are available: fresh tomato, tomato green-chili, tomato red-chili, and roasted chili-corn.

Then there’s the guacamole. It may be extra but it’s always worth it, right? Like all of the fillings, the guac is made fresh on-site every day by adding fresh lime, chili, and cilantro to roughly mashed avocado. 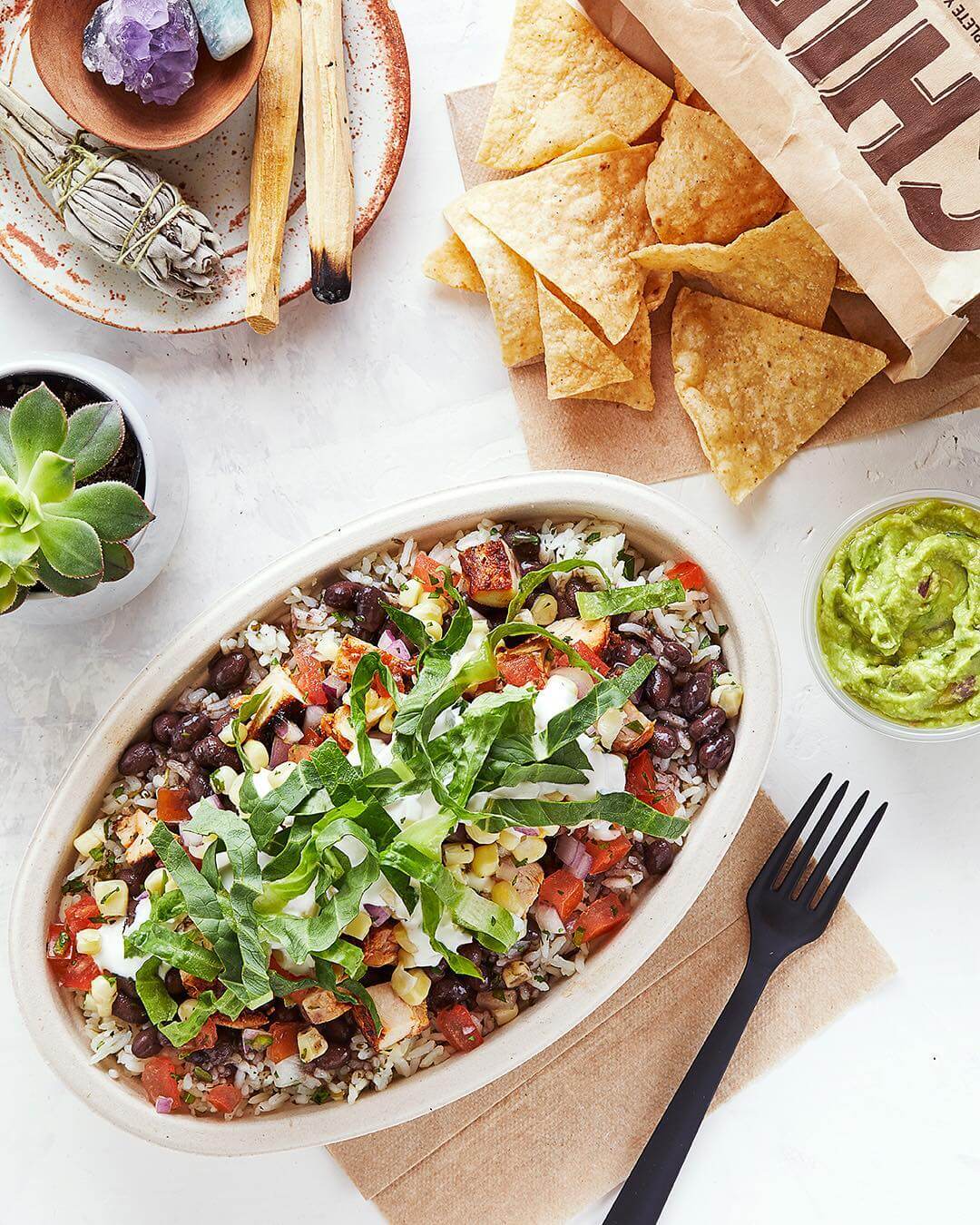 Sometimes called a naked burrito, Chipotle’s burrito bowls are the same ingredients assembled to the customer’s specifications, but served in a bowl instead of wrapped in a tortilla. These are great for gluten-free customers or people who prefer to eat their burrito with utensils. A more sophisticated way to chow down, albeit a tad less fun. 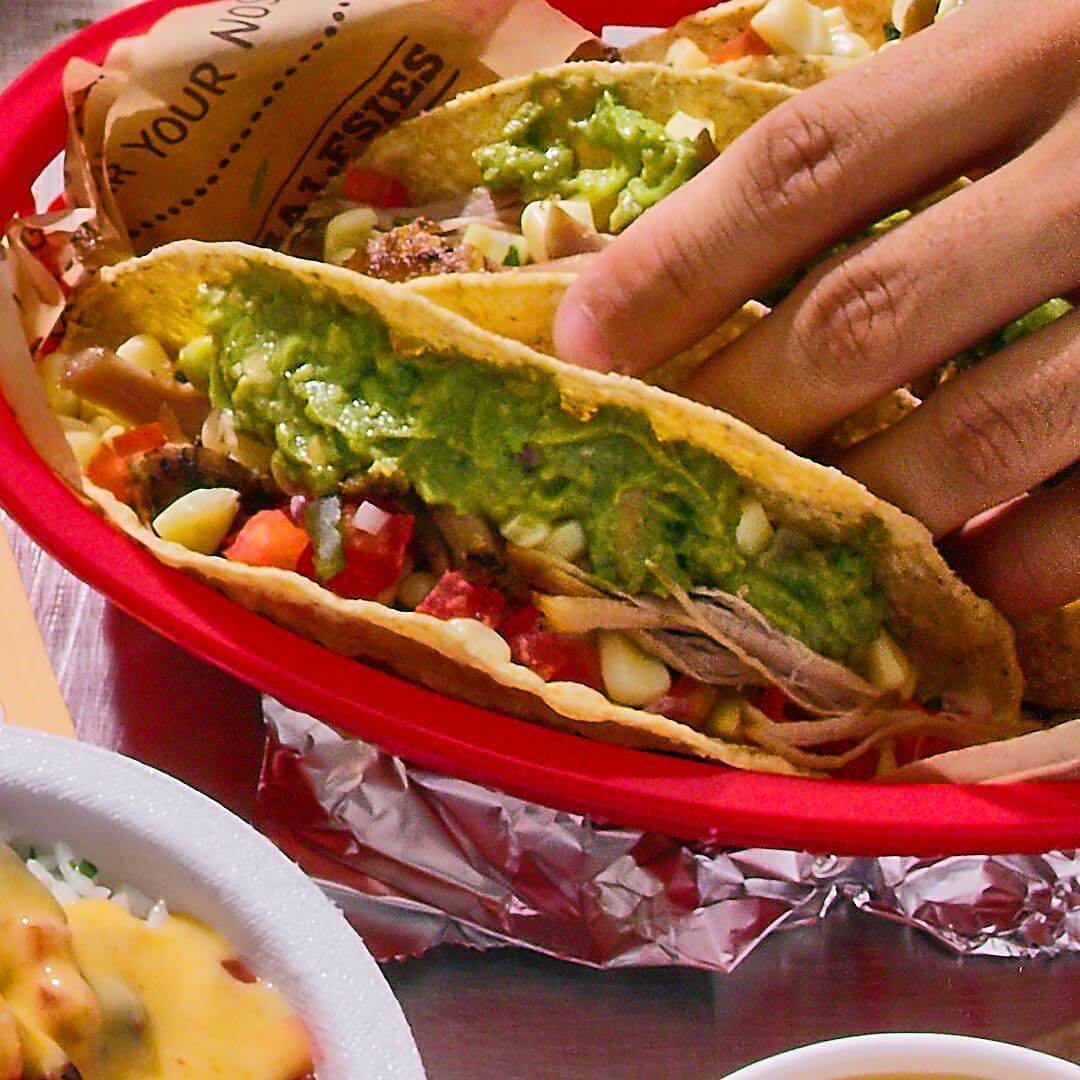 If tacos are what you’re about, pick from a crispy corn taco or the soft flour option. The countless combinations of all the freshly made fillings ensure plenty of mealtime variety. 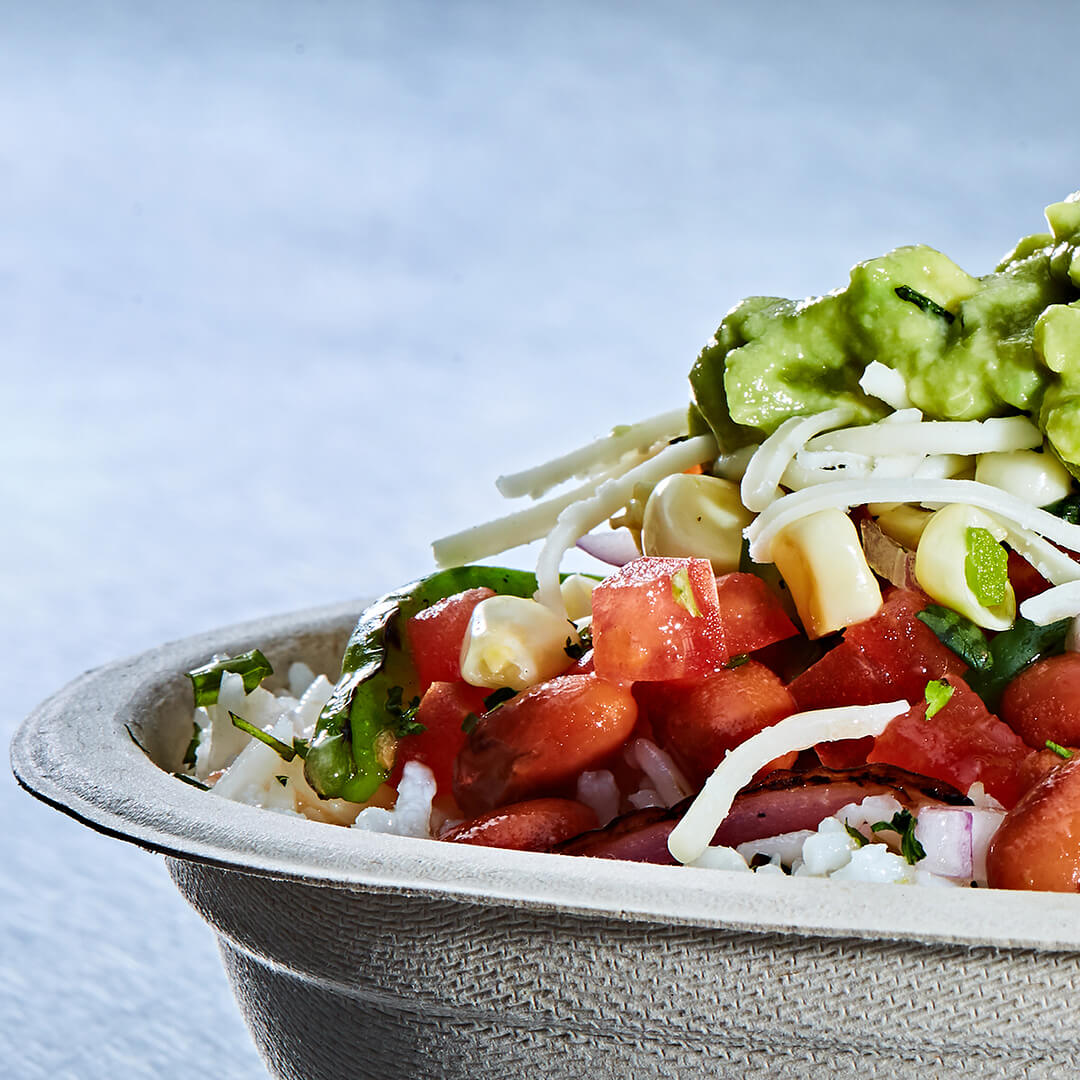 Those looking for a lower calorie meal option can opt for a salad bowl, which is essentially a burrito bowl just without the rice. 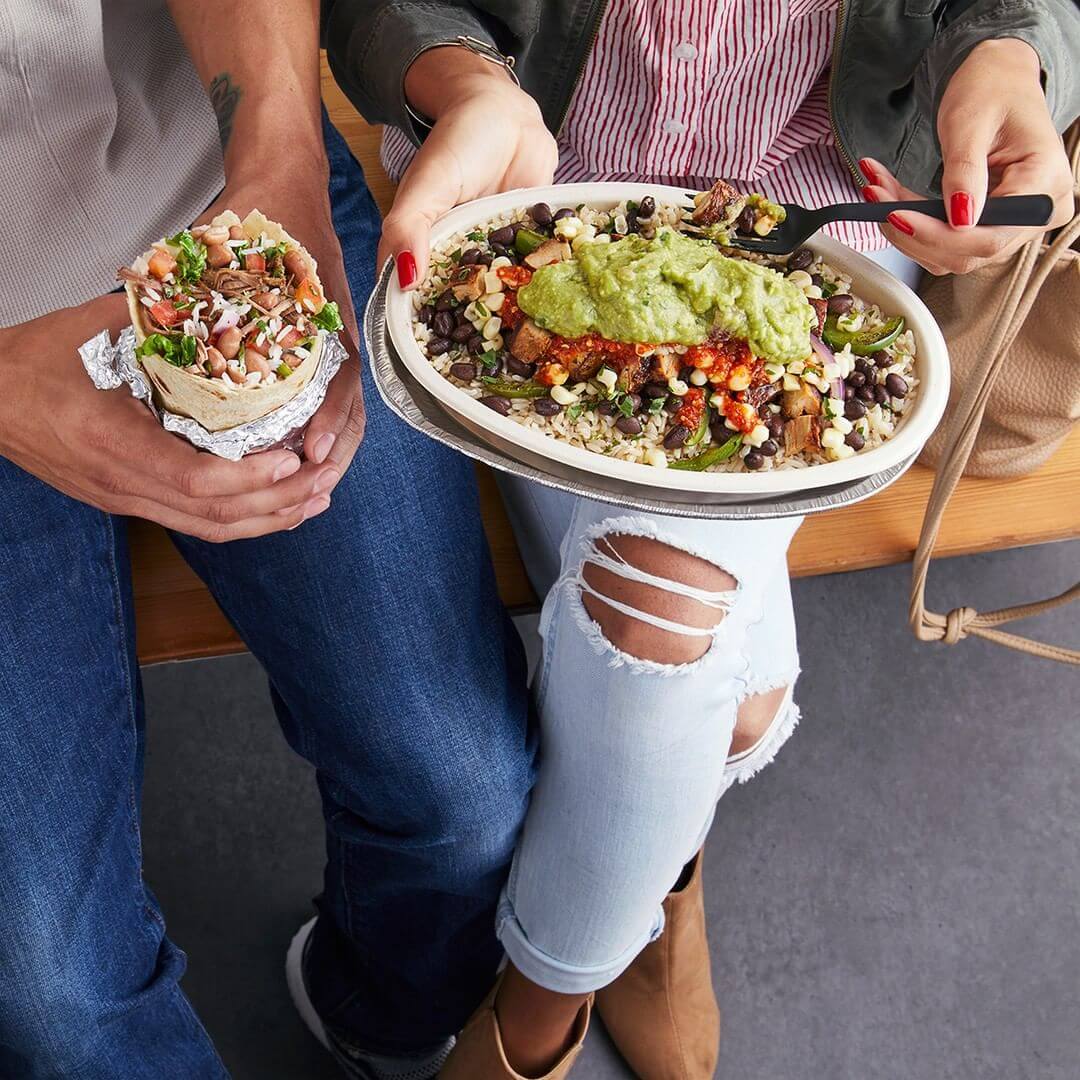 These “lifestyle bowls” are a new addition to Chipotle’s US menu and a departure from the eatery’s usual “design your own dish” format. As well as saving customers valuable lunch hour minutes pondering over which salsa to go for, the specialized bowls have been developed to suit particular ways of life such as Paleo, Whole30, or Vegan.

The vegan bowl is a colorful medley of brown rice, lettuce, and both the tomato and corn salsas. Since the bowl contains black beans and Sofritas, it is very protein-rich and bursting with authentic Mexican flavors. 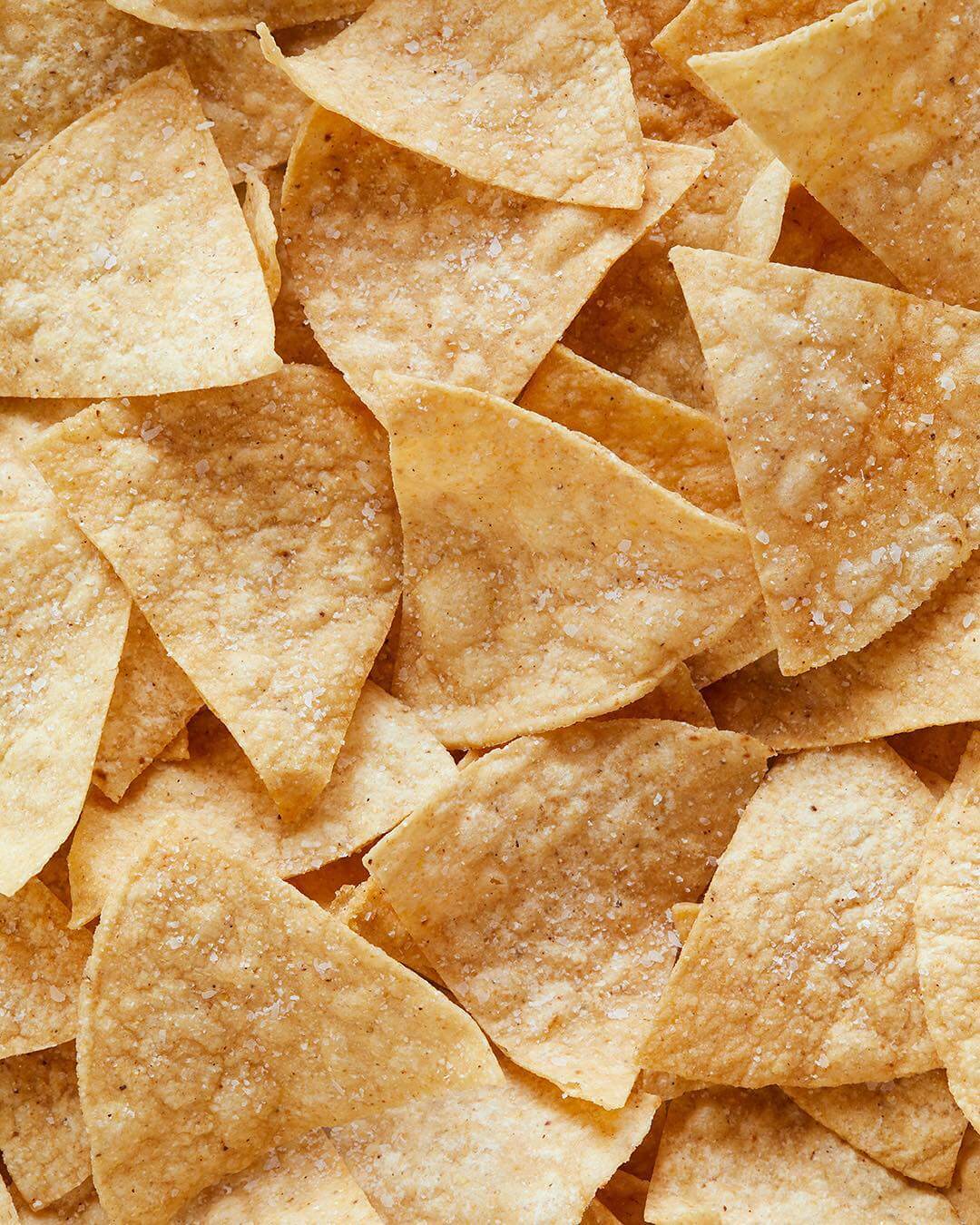 Kicking off the Mexican meal, Chipotle patrons can order tortilla chips with a variety of different dips. The crisp chips, which are lightly salted and served warm, can be dipped in your choice of four salsas including classic tomato or fiery roasted chili-corn. Or, of course, the chips can be dunked in guacamole. Creamy, nutty, and rich in potassium and vitamin C, guacamole really does sit head and shoulders above all other dips. 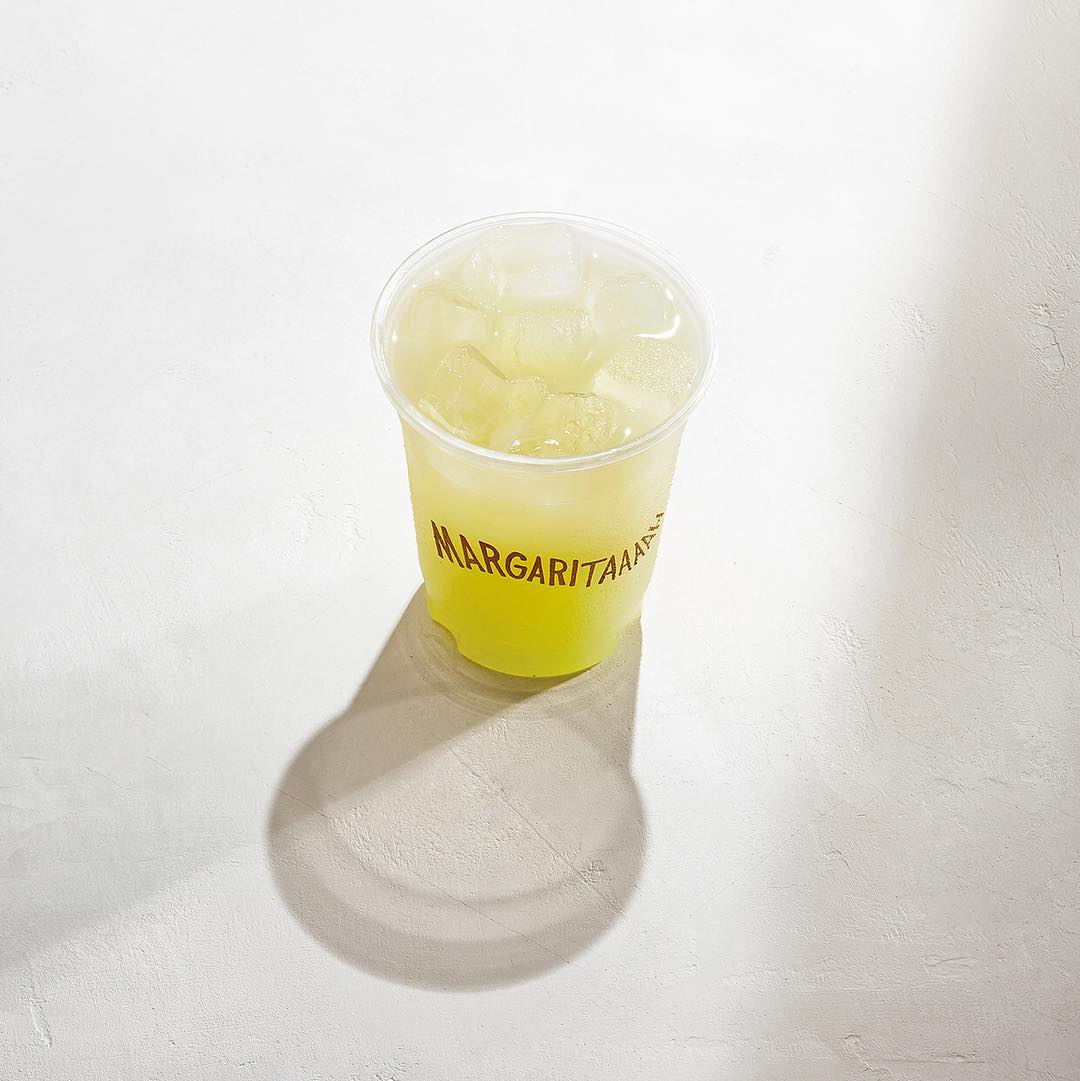 Chipotle is a company very much focused upon tickling the savory taste buds and as such, there is no dessert menu at present. However, those in the mood for something sugary can satisfy their sweet tooth with a bottle of Nantucket Nectar juice. These bottled juices come in a zesty array of flavors including peach-orange and pomegranate-cherry.

While there’s no exotic juice on offer for UK Chipotle customers, Brits can round off their meal with a freshly blended margarita. These vegan cocktails – made with Sauza tequila, triple sec, and fresh lemon and lime juice – are a refreshing way to end an excellent vegan meal.