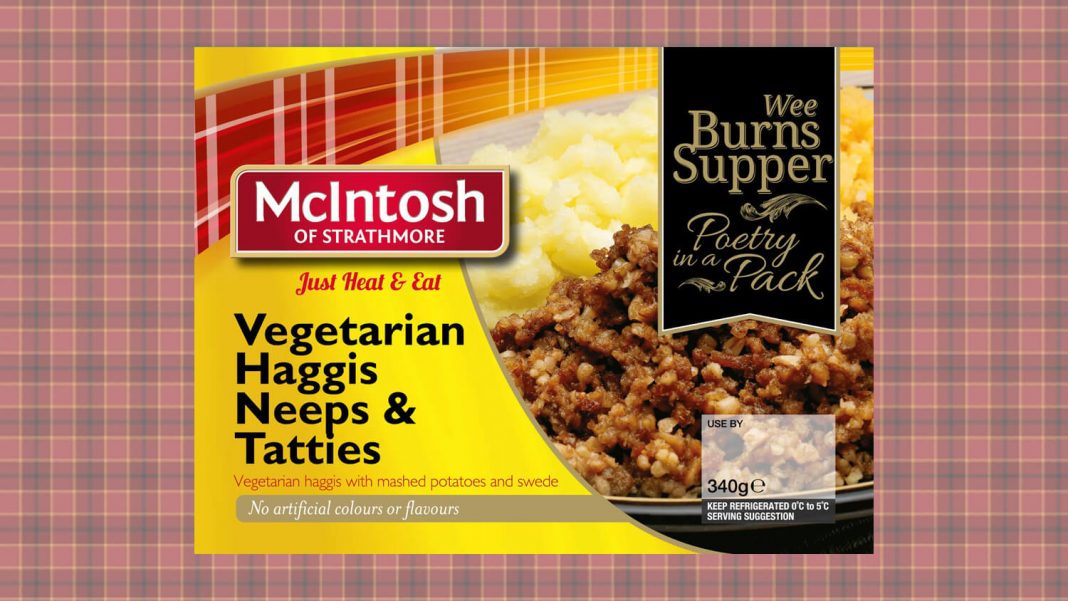 Tesco is stocking vegan haggis ahead of Burns night on Friday.

The plant-based haggis, made by Edinburgh-based family company Macsween, replaces the traditional sheep’s offal and suet with nuts, oats, beans, and vegetables. Although the launch triggered backlash from the Scottish Federation of Meat Traders, which said the release would make Robert Burns “scoff,” Tesco maintained the plant-based haggis is what its customers want.

“We’ve never seen anything like the current demand – and it’s not just during Burns’ week, it’s all year round,” Tesco Scottish food buyer, James Lamont, told the Telegraph. In addition to Macsween’s haggis, the supermarket is also stocking ready meals featuring meat-free haggis, neeps, and tatties from McIntosh of Strathmore.

Tesco isn’t the only UK supermarket to stock the vegan haggis. According to Macsween, it can also be found at Sainsbury’s, Morrisons, Waitrose, and Co-Op. Other options for vegan haggis in supermarkets include The Scottish Butcher’s Vegetarian Haggis, which can be found in Morrisons, Sainsbury’s, and Waitrose. Plant-based pop-up kitchen FacePlant Foods, which specializes in vegan street food, often serves deep-fried “haggis balls” at events throughout the nation.

Our vegetarian haggis is a combination of healthy fresh vegetables, mushrooms, pulses, oats, onions and seeds. It is approved by the vegetarian society and is suitable for vegans too! Why not try some of our mouth-watering recipes on our website – link in bio.

The love for the traditional Scottish food – particularly vegan-friendly versions – is strong, and has led to some interesting combinations. Rutherford’s Micropub in Kelso, Scotland, will launch a haggis-flavored vegan gin on Burns night.

“We scoured lots of recipes for traditional haggis, and narrowed it down to the key spices which give the unique flavour,” Rutherford’s owners Debbie and Simon Rutherford told the Border Telegraph. “Then we set about experimenting until we came up with a unique, and very tasty, Scottish alternative to whisky.”

According to DeliQuescent, where it can be purchased online, the savory pudding-inspired vegan spirit is an amber gin with spices and peppery notes that pairs well with tonic and ice or Irn Bru. “We can guarantee that no haggis, or any other animal, was harmed in the making,” the Rutherfords added. It’s also gluten-free.

Last July, Edinburgh-based brand Coco Chocolatier debuted a haggis-spiced, dairy-free chocolate bar. To make the product, the company blended the spices that are traditionally used in the food – cloves, allspice, and nutmeg with a dash of black pepper – with single-origin Columbian dark chocolate.