Popular ice cream brand Halo Top, says it will be launching its line of vegan flavors across Australia at Woolworths locations.

The company launched a vegan range of seven flavors last year in the U.S., to rave reviews. In November, it announced it would be serving select vegan flavors at its first scoop shop. And then just last month in added seven new vegan flavors to its lineup. 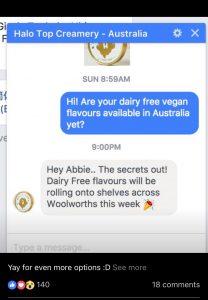 “When we launched our original line of non-dairy flavors, we knew we wanted to expand to include even more indulgent options,” Halo Top’s CEO and founder, Justin Woolverton, stated in a press release. “We know our fans look to us for variety and creativity in our flavors, and we want to make sure we always address those requests for our dairy-averse and vegan fans as well.”

Australia’s vegan community is growing. 2018 kicked off with Domino’s announcing that it would be adding several vegan pizzas to its menu. The launch was so successful that the chain said it would keep the vegan items on the menu indefinitely while simultaneously facing shortages of vegan cheese made by U.S.-based Follow Your Heart.