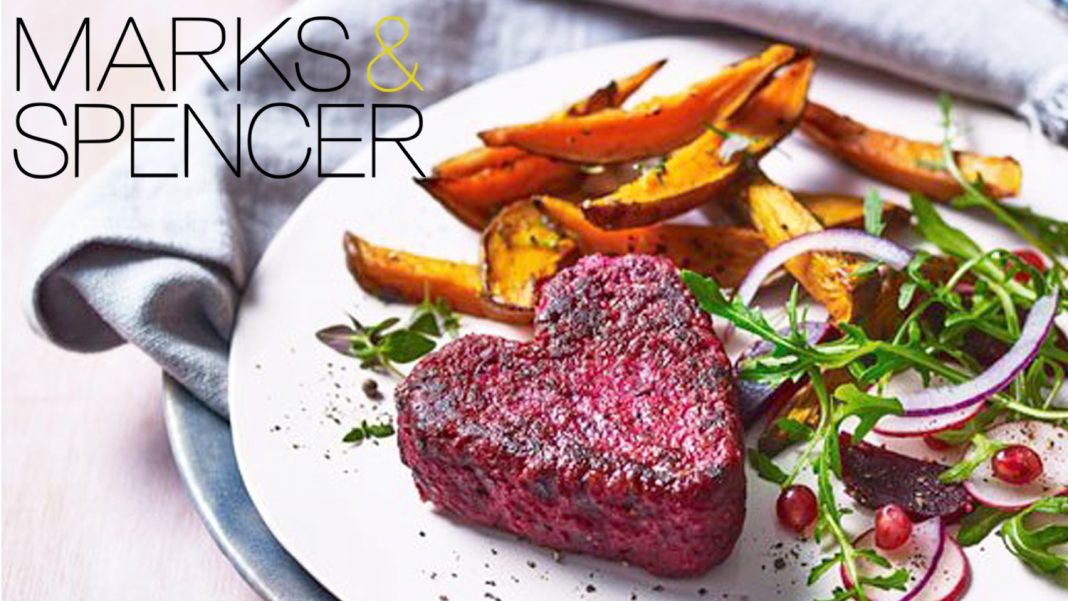 To cater to demand, M&S recently announced the new plant-based product. Called the Heart-Beet Burger, the patty is made with roasted beetroot and sweet onions and promises to get your Valentine’s “heart-beet racing.”

For those you asking about a vegan #LoveSausage, let us introduce our Heart-Beet Burger, made with roasted beetroot and sweet onions. Pick one up in store now and serve in a fluffy bun for a vegan Valentine’s dinner that’s sure to get your date’s heart-beet racing. #MyMarksFave pic.twitter.com/jqY6srSHhj

M&S didn’t stop at the vegan heart-shaped patty; it also introduced its first-ever vegan Valentine’s dinner. For £20, customers can enjoy a plant-based starter, main, side, dessert, chocolate, and bottle of wine.

Shoppers in the UK can also purchase vegan heart-shaped crumpets and pink gin from supermarket chain Asda. Tesco, the country’s largest supermarket, sells plant-based red velvet brownies from Wicked Kitchen, ideal for wooing a loved one (or treating a friend) on February 14.

Companies around the globe are embracing the fun in Valentine’s Day; vegan-friendly brand Oreo recently introduced pink “Love, Oreo” cookies, sweet sayings like “Let’s Twist” and “Dunk In Love” are printed on the outer layers. Walmart in the U.S. even began selling bouquets of Oreos which feature 19 packs of the original vegan-friendly flavour arranged in a vase made from cookies, topped with a bow.

Cruelty-free brand Lush launched a collection of Valentine-themed vegan bath bombs. “Cheeky” peach emoji and “steamy” aubergine emoji bath bombs are on offer, as well as “Love Island” body scrubs and ylang-ylang bubble bars shaped liked the number six (or nine, depending on which way you look at it).

Shortly after, the retailer announced a range of affordable vegan leather footwear available in 350 styles.

M&S has been praised for its new products. PETA awarded the chain with its first “Vegan-Friendly High-Street Retailer Award” for its “clearly, labeled, fabulous food offerings and accessories! Compassion is in fashion.”

Marks & Spencer is selling its Heart-Beet Burger for £3.50 for a pack of two.