The holiday season is here. It’s time to start shopping for gifts (kudos to everyone who got a jump on that), and to think about what kind of vegan holiday roasts are going on those festive dinner tables.

Turkey or ham is the traditional centerpiece of the holiday table. But going the traditional route is no longer the default. You can enjoy your favorite festive foods sans animal ingredients.

What’s a vegan holiday roast made from? It depends on who’s making it. Field Roast, for example, uses its signature “grain meat” to make its vegan festive roasts. The plant-based meat is made with grains, vegetables, legumes, and spices. The main source of protein is vital wheat gluten, a vegan meat-making staple. 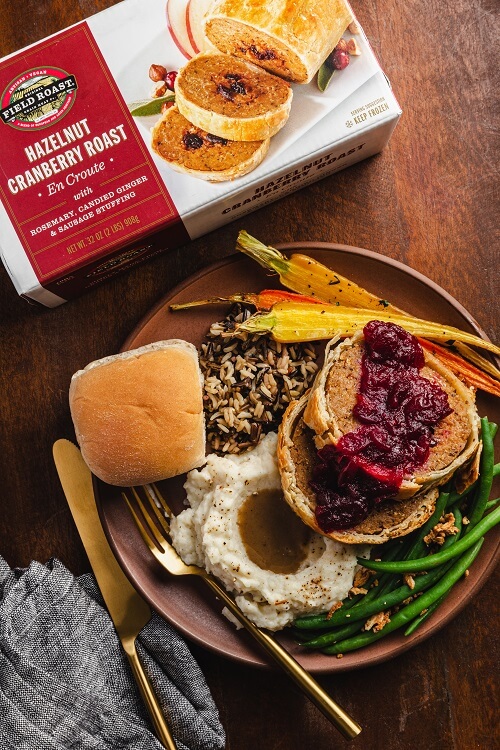 Be sure to read the instructions before getting started. Like a traditional roast, many vegan roasts require time to thaw before they’re ready for the oven.

For solo roasts, using a baking dish or roasting pan is your best bet. Choose glass or ceramic — both of these are good for keeping your food warm once it’s out of the oven. You can cook your roast alone or add seasonal vegetables to the roasting pan. Jackie Sobon, blogger and author of the cookbook “Vegan Yack Attack’s Plant Based Meal Prep,” cooked her Field Roast Celebration Roast with delicata squash, carrots, Brussels sprouts, leeks, mushrooms, and fresh sage. Her recipe is cooked in a baking dish with a bit of water, which is used to make gravy once the roast is done cooking.

The Best Sides for Vegan Roasts

Some of the holiday roasts below come with a complete meal, from sides to desserts. But, what should you serve if you’re getting just a roast? Easy — think of what’s normally on a holiday table and make it vegan. Use our holiday guide for some delicious recipe inspo.

Mashed potatoes are just as creamy when made with dairy-free butter and milk. Your green bean casserole will shine with homemade vegan cream of mushroom soup replacing the traditional dairy-laden dish. For stuffing, try searching for a vegan recipe and picking what sounds best. Serve those vegan biscuits warm, with vegan butter on the side. While most of the roasts come with vegan gravy, it never hurts to have extra — you can make your own or buy it pre-made.

Craving sweet potato casserole? Pick up a pack of gelatin-free marshmallows, like Dandies or Trader Joe’s brand. Cranberry sauce is almost always vegan by default. Round out your holiday table with baked mac and cheese, a plateful of roasted veggies seasoned with thyme and sage, and anything else that sounds delicious. 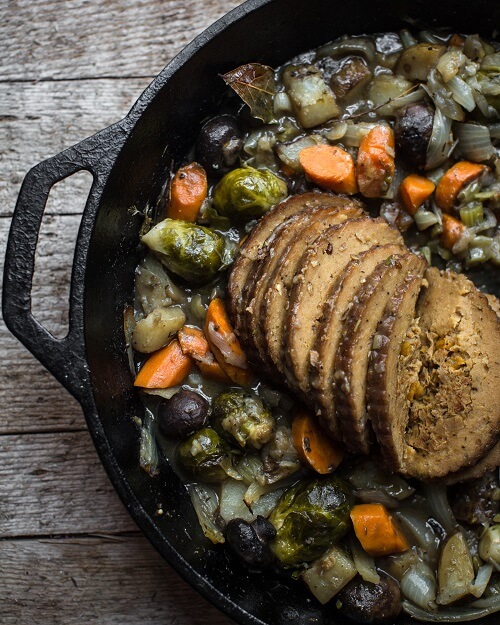 If you’re having a small get-together, there’s the one-pound Celebration Roast. It features the same signature grain meat seasoned with sage, garlic, and onion and is stuffed with a sausage-style stuffing that features butternut squash, mushrooms, and Granny Smith apples made with a festive blend of rosemary, sage, and thyme. You can bake the Field Roast Celebration Roast on its own, or add it to a roasting pan with seasonal vegetables like Brussels sprouts, beets, carrots, and onions.

Field Roast offers a third option for your meat-free Thanksgiving centerpiece. The Hazelnut Cranberry Roast En Croute consists of hazelnut-infused grain meat that surrounds a stuffing of Field Roast sausages, spicy crystallized ginger, cranberries, and apples. It’s all wrapped in a flaky, savory, dairy-free puff pastry that takes on a golden color as it bakes in the oven. Pair it with all of your favorite vegan Thanksgiving sides.

To learn more about Field Roast, visit the website. 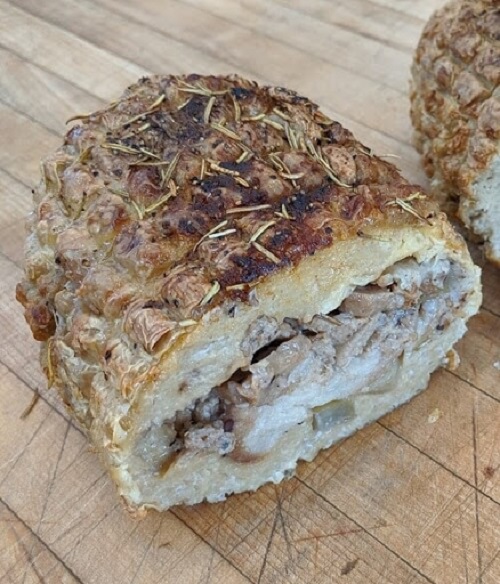 The Butcher’s Son is a vegan delicatessen based in Downtown Berkeley, California. Run by a sibling duo that grew up in the restaurant business, the plant-powered deli has a full spread available for the holidays. There’s a vegan turkey roast — stuffed or un-stuffed — pot pie, shepherd’s pie, and meat-free sausage stuffing. They have plenty to choose from for dessert, from dairy-free eggnog to pumpkin cheesecake and cookie dough, too. 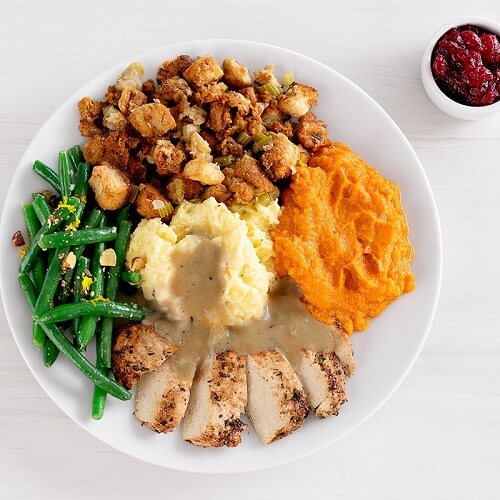 Veggie Grill has you covered for the holidays,

West Coast-based vegan fast-casual eatery Veggie Grill is bringing a festive feast to the table this holiday season. The Festive Feast, which serves four people, features a stuffed holiday roast, apple sausage stuffing, green bean casserole, mashed yams, cauli-mashed potatoes, porcini mushroom gravy, and cranberry sauce. You can also add side dishes like vegan mac and cheese and a four-pack of pumpkin cakes. This offer is available for Thanksgiving or for the December holidays.

The Thanksgiving Sandwich is a sweet and savory sub made with meat-free roasted turkey, apple sausage stuffing, gravy, and cranberry sauce served with a side of mashed yams. It’s available throughout the entire holiday season.

If you’re dining solo, try the Holiday Dinner Plate, which features everything from the Festive Feast in one dish. It’s available after Thanksgiving through the December holiday season. 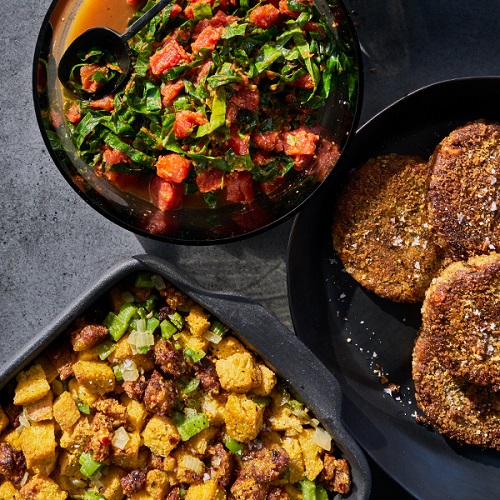 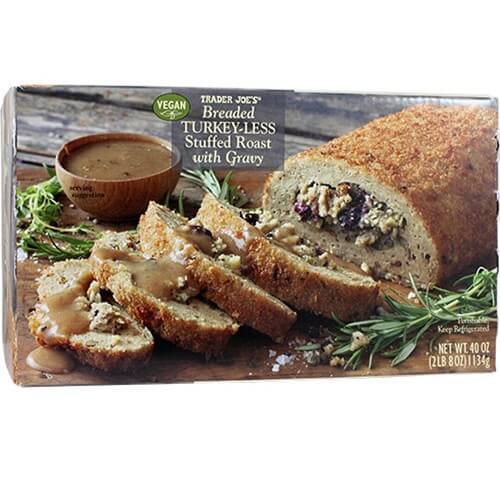 Trader Joe’s Breaded Turkey-less Stuffed Roast With Gravy is back again. This budget-friendly vegan roast features wild rice and cranberry stuffing encased in seitan with a crispy, herbed breading — it also comes with a packet of mushroom gravy. Just heat, slice, and serve with your favorite sides. Trader Joe’s vegan Thanksgiving roast is available in the freezer section nationwide.