Nothing says “it’s officially summer” like an ice cream cone loaded with your favorite dairy-free frozen dessert melting down your arm. Scoops of decadent vegan ice cream are the perfect way to stay cool during the warmer months.

What Is Vegan Ice Cream Made Of? 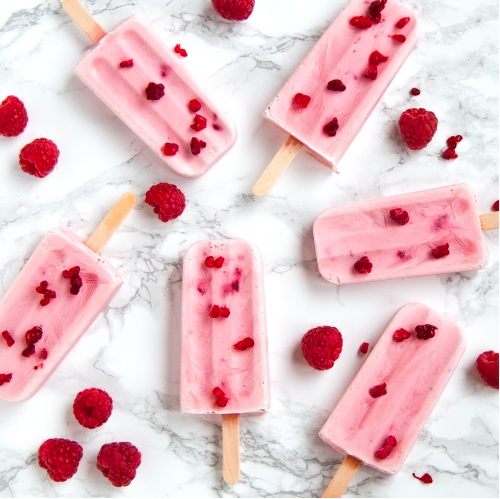 Vegan ice cream is made from a number of plant-based ingredients.

What Are The Best Vegan Ice Cream Ingredients?

From soy milk to oat and even avocado, vegan ice cream brands use a number of ingredients to give dairy-free desserts their rich and creamy consistency. Almond milk is a popular dairy-free beverage and many companies use it to create their non-dairy ice creams. Coconut and cashew milk are also popular ice cream base ingredients. 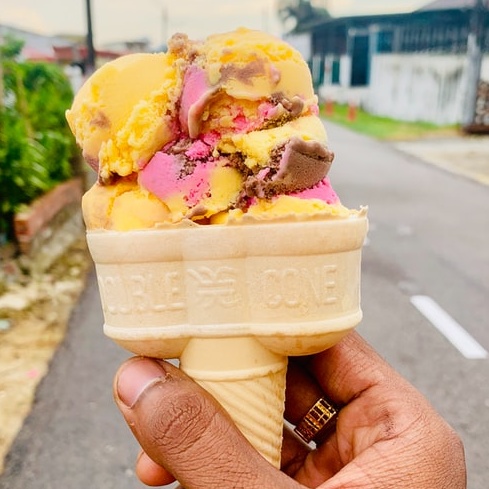 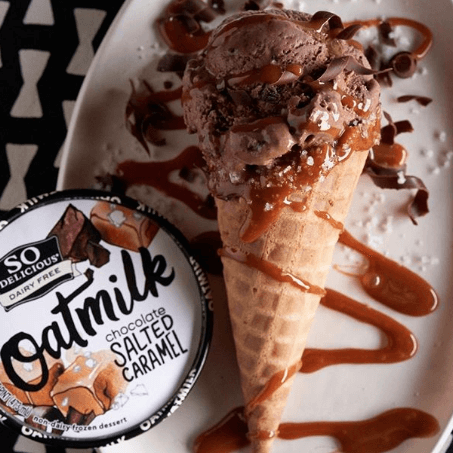 This vegan brand carries a variety of non-dairy desserts. | So Delicious 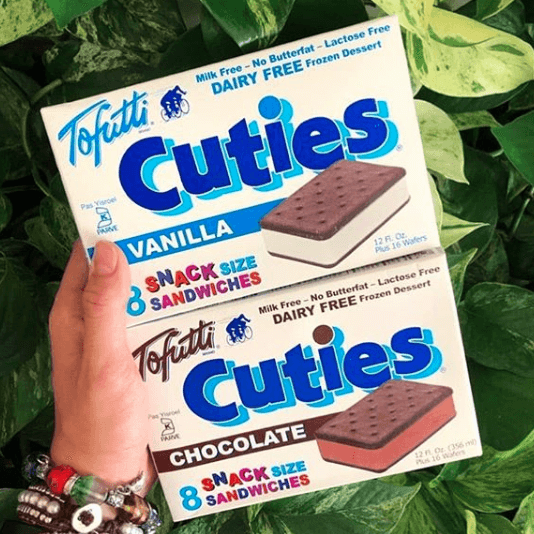 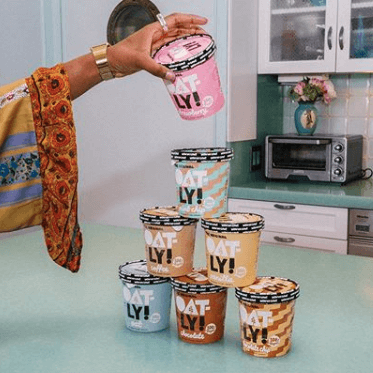 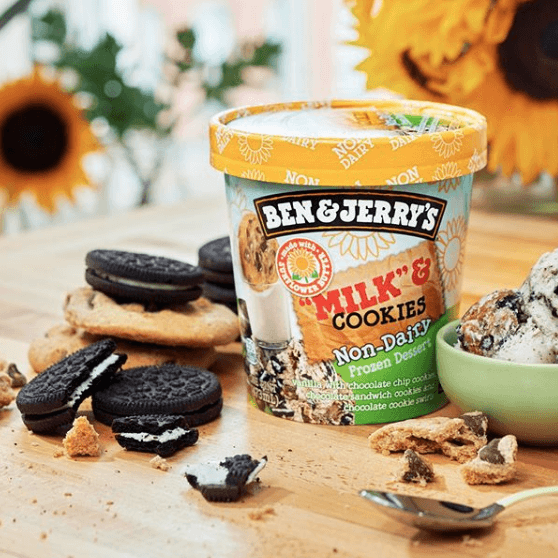 Although not a vegan brand, Ben & Jerry’s debuted its first non-dairy flavors in 2016 with the release of the plant-based Chunky Monkey, P.B. and Cookies, Coffee Caramel Fudge, and Chocolate Fudge Brownie. The brand has since added to its vegan frozen dessert selection. Its almond milk-based pints are now available in 12 different flavors. It also offers sunflower butter-based pints in flavors like “Milk” & Cookies and Mint Chocolate Chip. 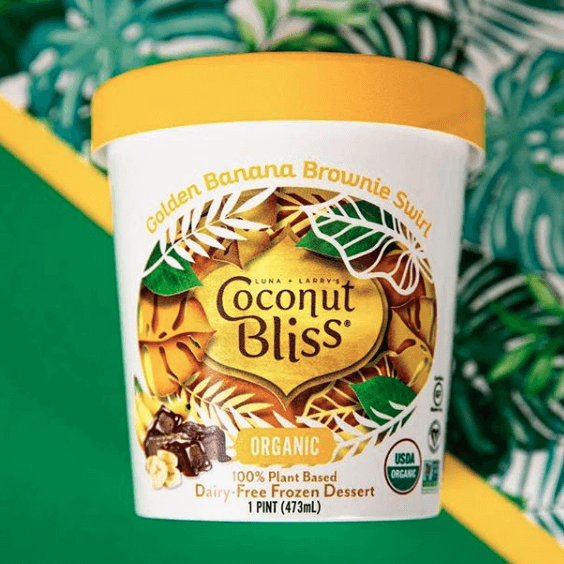 This ice cream is made with organic coconut milk. | Coconut Bliss 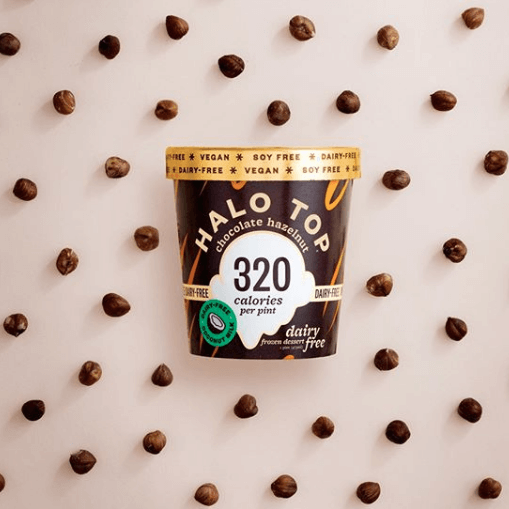 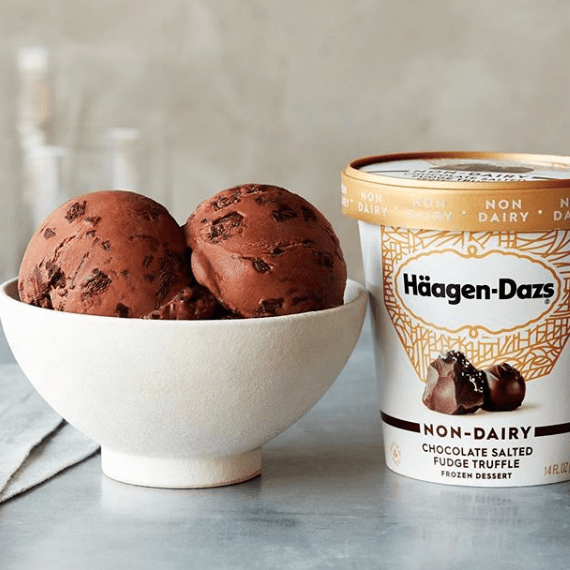 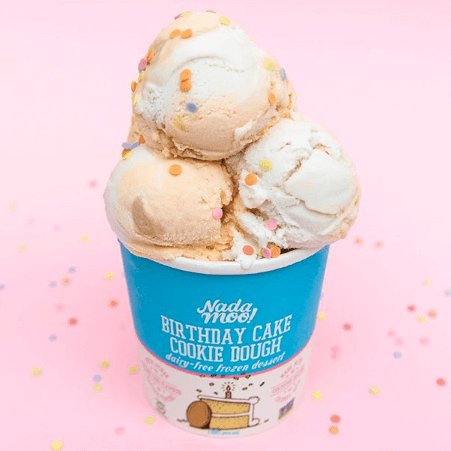 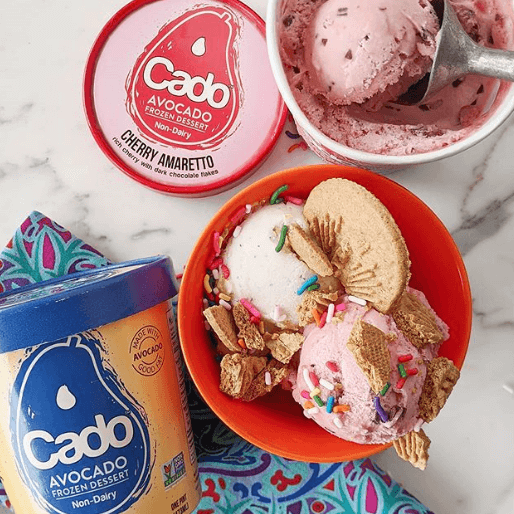 Cado changed the vegan ice cream game with the launch of its avocado-based frozen desserts. According to the company, its non-dairy desserts contain less sugar than other brands and are rich in “good” fats. Flavors include cookies and cream, mint chocolate chip, and classic vanilla bean. 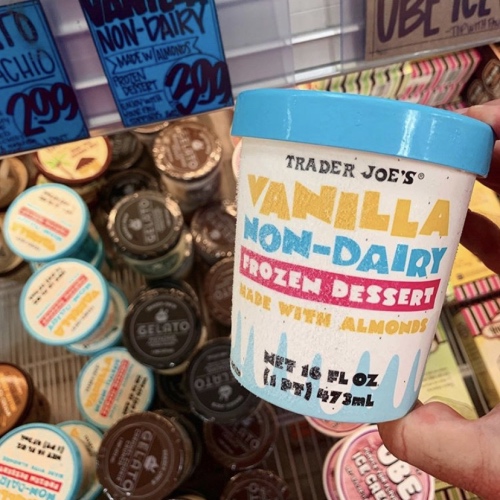 Grocery store chain Trader Joe’s carries a dairy-free vanilla ice cream, which is made with almonds. It also recently released a non-dairy strawberry flavor. The 16-ounce pint retails for $3.99 and features an oat milk-base that includes candied strawberries and almond brittle. 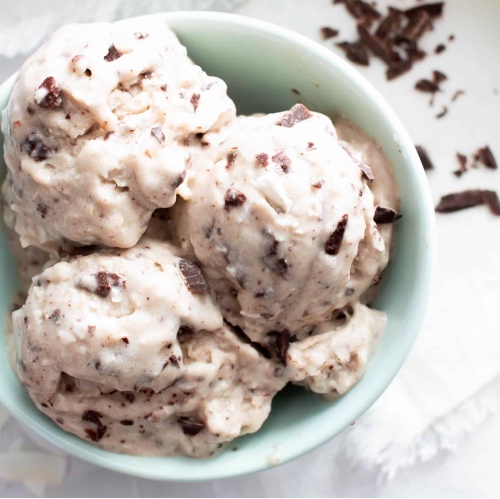 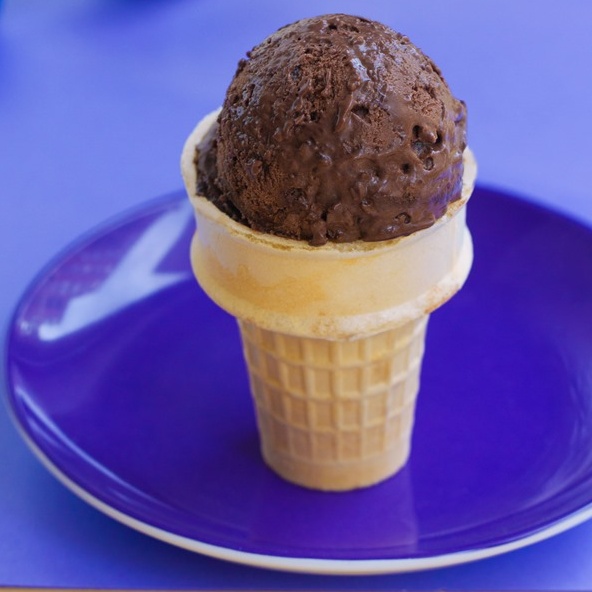 Whip up this vegan frozen dessert recipe for a classic, rich and creamy chocolate ice cream. Recipe ingredients include coconut milk, cocoa powder, salt, and mini, vegan chocolate chips. Scoop it into a cone and enjoy! 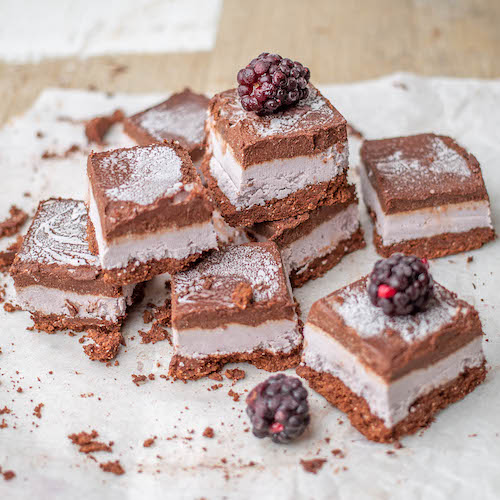 These ice cream sandwiches are perfect for summer. | Hazel and Cacao

Up your vegan frozen treat game with these chocolate blackberry ice cream sandwiches. In addition to being dairy-free, the recipe is free of sugar and gluten. The frozen dessert trifecta includes a base of almond meal, cacao powder, and maple syrup. The cashew-based filling features a rich dark chocolate cream topping. 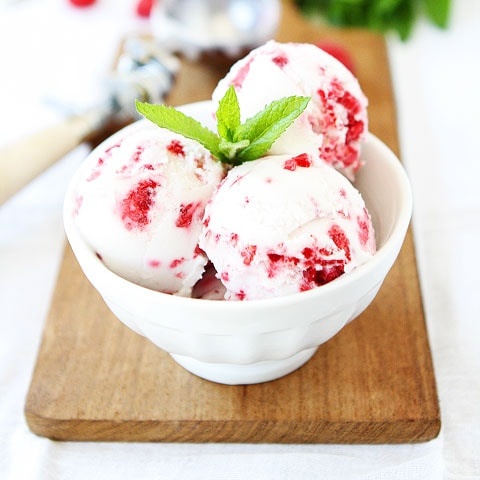 Raspberry lovers will enjoy this coconut-based ice cream. | Two Peas and Their Pod

This coconut milk-based raspberry ice cream can be made using only four ingredients: coconut milk, granulated sugar, vanilla extract, and—of course—raspberries. Enjoy it plain or atop bananas in an ice cream sundae. 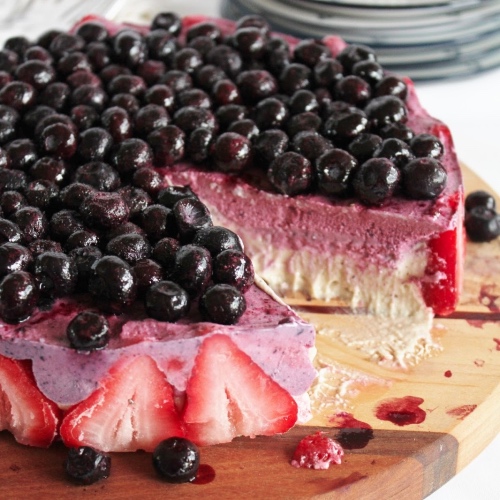 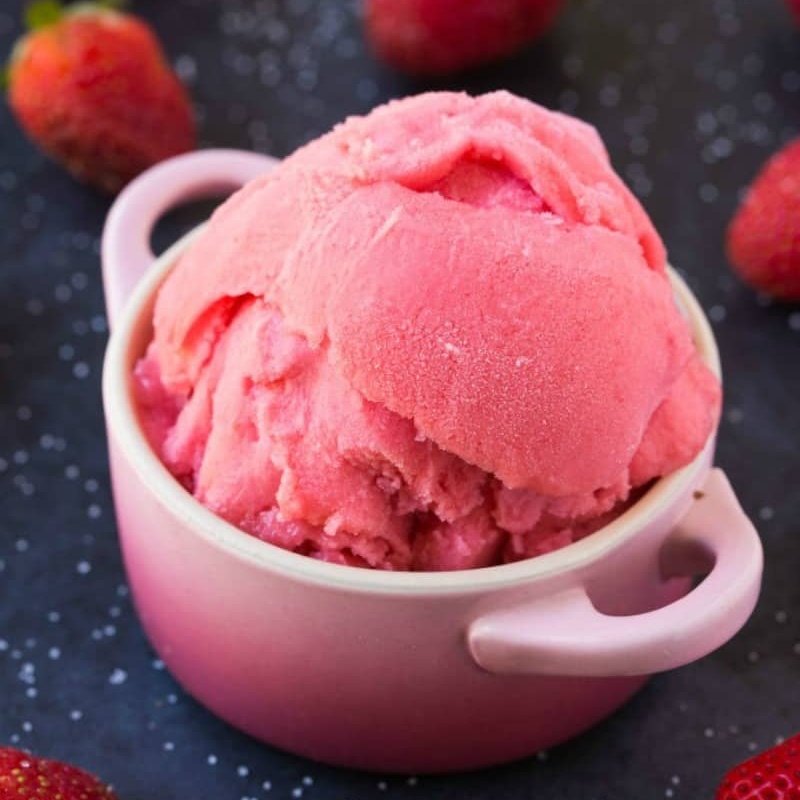 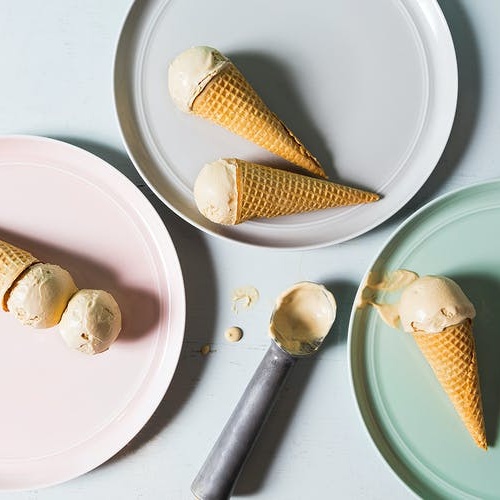 You can whip up this cashew-based, non-dairy salted caramel ice cream recipe in under an hour. Enjoy it on a crunchy cone or in a waffle bowl.