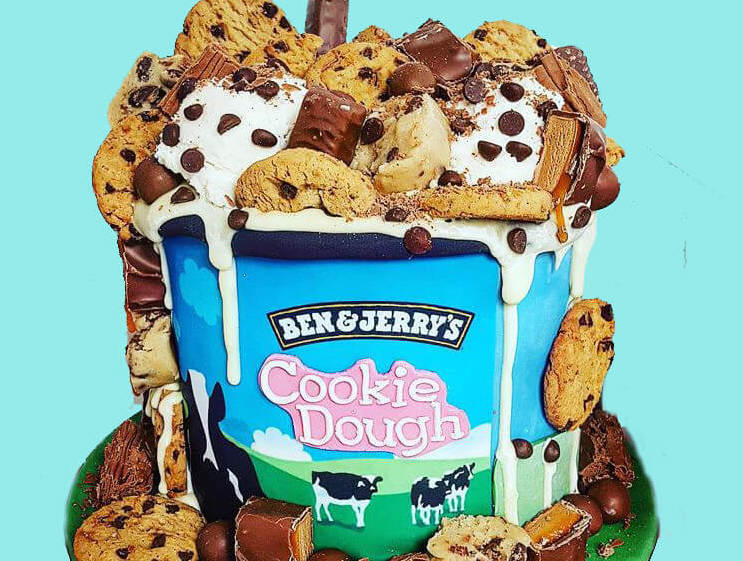 Celebrating a birthday month, special occasion, or just craving something sweet? Ben & Jerry’s can help. Customers can now order customizable vegan ice cream cakes in all scoop shops across the US, featuring their choice of non-dairy ice cream, cookie crumbles, and frosting.

Ben & Jerry’s assured that all customers have to do is ask to create their ultimate vegan ice cream cake. Each shop is unique in its offerings, but the structure is the same. The “cake” layers are made out of vegan chocolate cookie sandwich crumbles or other crushed vegan toppings, which are layered between the customer’s choice of non-dairy ice cream. The cake is then finished with vegan frosting and additional vegan toppings of choice.

Want more? The company frequently highlights its non-dairy flavors with simple yet decadent recipes, both on its blog and Instagram page. For a semi-homemade cake, try the Vegan Coconut Seven Layer Bar Cupcakes, infused with vegan graham cracker pieces and topped with ice cream and vegan coconut frosting.

We just wanted an excuse to eat the center of a banana bread loaf. #nondairy #recipe

Following Ben & Jerry’s leap into the vegan market, other corporate dairy-based ice cream companies began to churn out their own vegan lines. Haagen-Dazs, Breyers, and Halo Top have all debuted multiple vegan flavors, and smaller brands are capitalizing on the vegan trend as well. This year at Natural Products ExpoWest, two well-known brands, Jenni’s and McConnell’s, debuted their highly-anticipated vegan options.

Vegan companies are also benefiting from the surge in non-dairy dessert demand. NadaMoo, a nationwide coconut milk-based ice cream company, has continuously rolled out new flavors and just recently secured a partnership with the discount grocer, Stater Bros. 171 Stater Bros. in southern California are now carrying the entire line of NadaMoo flavors. On a local level, Cocobella Creamery, a 100% vegan ice cream shop in Los Angeles, just received the Small Business Award from the city. They do cakes, too.