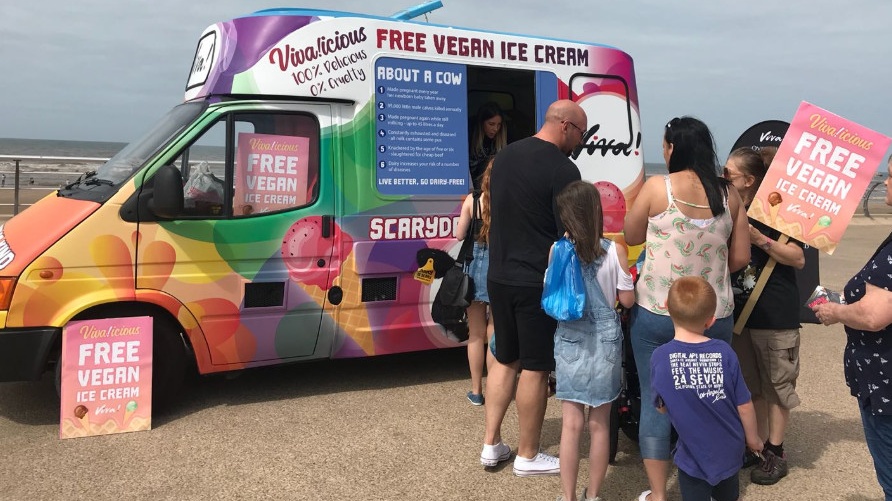 Across the UK, crowds are queuing up for free vegan ice cream handed out by the animal rights charity, Viva! from its new van.

Called the “Viva!licious Vegan Ice Cream Van Tour,” the Viva! campaign aims to show the British public how delicious nondairy ice cream is, while also raising awareness of the inherent cruelty of the dairy industry without graphic images. Instead, a young calf displayed on the side of the van is simply paired with the words “Cow Free, Cruelty Free.”

“We all know how extremely delicious vegan ice-cream is… all the taste without the cruelty,” reads Viva!’s website. “However, many of the British public don’t know how easy and yummy it is to choose a dairy-free option and how much suffering they can prevent by doing so.”

On the first day of the campaign, which kicked off earlier this week on Cardiff High Street, Viva! took to social media to show people waiting in line for free nondairy ice cream, including vegan professional skateboarder and star of MTV’s “Dirty Sanchez,” Mathew Pritchard. Volunteers from South Wales Animal Save, an organization where individuals bear witness to animals being brought to slaughter to highlight injustice, helped make the event possible.

On the second day of the tour, the Viva!licious vegan ice cream truck traveled to Blackpool where it parked near the beach and, once again, attracted a crowd of people looking to get a scoop of free vegan ice cream.  Many Instagram users expressed interest in the campaign, asking Viva! if the truck would be coming to additional locations throughout the UK.

“Giving out free ice cream is the perfect way to create a positive atmosphere for vegan outreach,” the campaign noted.

The free vegan ice cream tour is scheduled to continue until Monday, August 6. Those looking for a full schedule of where the Viva!licious vegan ice cream van is expected to be can do so by visiting the campaign page.