Updated August 31, 2019. Stockist of all things frozen, Iceland Foods supermarkets have been filling up British ice-boxes since 1970.

Under the popular motto “That’s why Mums go to Iceland” the 800-store strong chain became synonymous with budget buys and quick, midweek meals. There is no denying that the store founded by Malcolm Walker, (or Sir Malcolm since his knighthood in 2017) has in the past, been associated with party platters and oven chips. But prawn rings aside, it has has been one of the UK’s most progressive food companies when it comes to responding to market trends and environmental concerns.

Long before Iceland launched its own popular line of meat-free products last year, the supermarket chain had been putting food sustainability and the nation’s health at the forefront of its product development. According to Iceland’s website, the chain removed all artificial colorings and monosodium glutamate from its own products in 1986. It also banned mechanically recovered meat, or “white slime’” from all its own-brand goods in 1990 and went on to guarantee all its own-label products were GM ingredient-free in 1999.

Throughout its almost fifty-year story, Iceland had been particularly tuned in to customer needs. The chain was well ahead of the game when it offered a home-delivery service in 1996 and Sir Malcolm was named “Most People-Focused CEO” at the annual HR Excellence Awards in 2014. An especially customer-orientated move was Iceland’s launching of its own plant-based line in 2018.

A quick rummage on Iceland’s grocery website shows the company’s awareness of customer needs, with vegan, vegetarian, and gluten-free all having their own search categories.

The vegan search option returns 45 products. Even more impressive is that aside from Iceland’s exclusive No Bull range, the results also include a number of other plant-based products, showing an insightful understanding of plant-based ingredients and the growing interest in the segment.

As well as its commitment to supplying the growing food market with affordable, plant-based, and GMO-free items, Iceland is also a key player in the fight against unnecessary food packaging. In particular, Iceland is determined to reduce its use of non-biodegradable plastic in its own product packaging. The overarching aim is to reduce ocean plastic pollution which causes major damage to marine life.

In January, the chain announced that it would be removing all plastic from its own products with the goal of being plastic-free by 2023. The plan for plastic purging will include replacing black plastic ready meal trays with recyclable aluminum and swapping cellophane fruit and veg bags with paper ones or cotton nets. The supermarket also plans to replace plastic punnets with options like paper bands which according to Iceland’s website, have been used to bunch its bananas since September 2018. 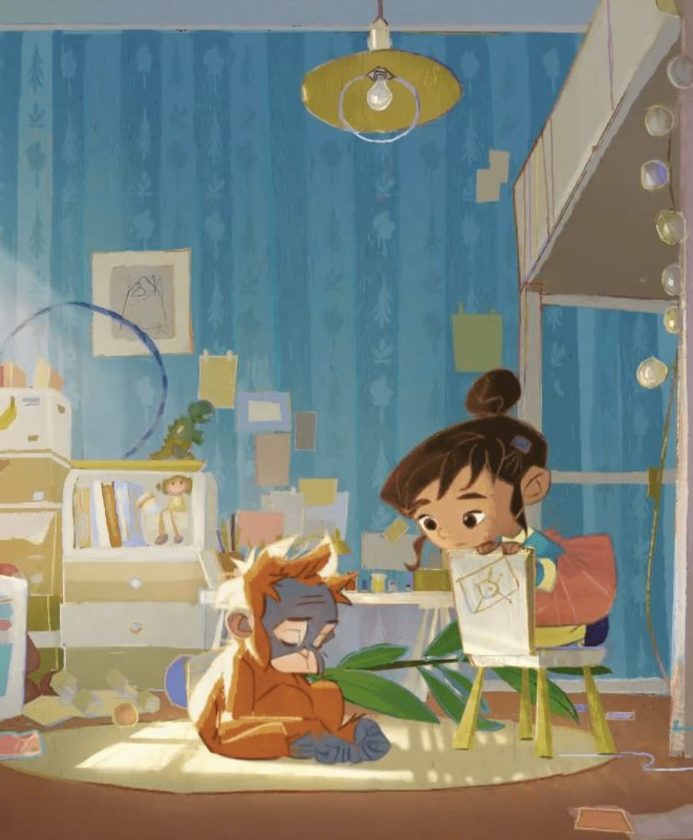 Iceland is not only invested in reducing plastic pollution and its own carbon footprint, but it is also focused on ethical sourcing. The supermarket developed its own custodianship named SeaKind to promote sustainable fishing and it also ensures all its meat comes from suppliers who rear their animals according to a strict animal welfare policy.

Most notably, last year Iceland took a firm stand against deforestation and the increased endangerment of orangutans by banning palm oil from all its own-brand products. The chain announced the ban in April 2018 and gives an update on its website:

“No Iceland own-label products containing palm oil as an ingredient have been manufactured since last year. We have 100% achieved our goal.”

The freezer chain received a particularly frosty reception when it aired its Christmas commercial which highlighted the impact of palm oil production on the orangutan’s natural habitat.

The animated commercial created by Greenpeace was dubbed too political by British television advertisement overseer, Clearcast and was swiftly banned. Iceland didn’t go down without a fight, however, and the store’s Managing Director Richard Walker responded to the ban by saying:

“We think this is a huge story that needs to be told. We always knew there was a risk [the clip would not be cleared for TV] but we gave it our best shot.”

Considerably more than frozen peas, Iceland is an environmentally-minded company which also runs its own charitable trust called the Iceland Foods Charitable Foundation. Last year Iceland delivered on its pledge to donate a staggering £10 million to fund the Hub of the UK Dementia Research Institute at UCL. This followed Sir Malcolm and his son Richard Walker’s charity expedition of Mount Everest in 2011, where they raised over £1 million for  Alzheimer’s Research UK.

Not only does the fundraising British supermarket stand by its values in the face of controversy, but it is also making undeniably cool and tasty plant-based options accessible to everyone. 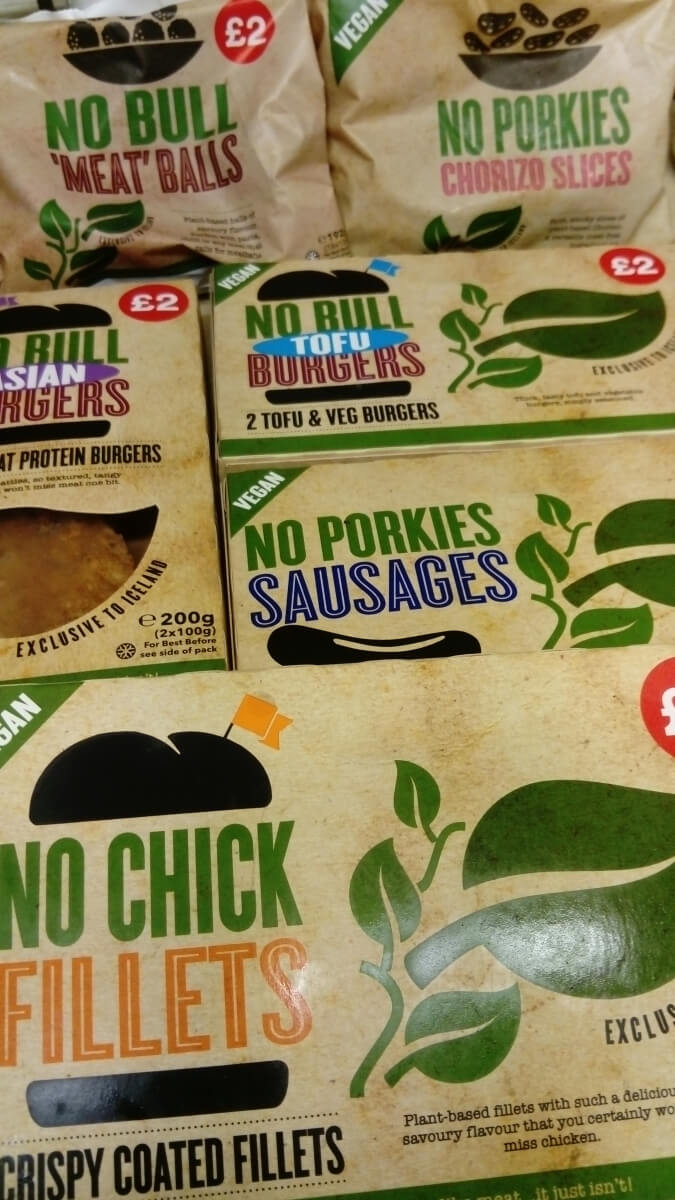 Within three months of launching its “No Bull” vegan quarter-pounder burgers last year, Iceland was selling more of its plant-based patties than its wagyu beef burgers. The popular soy-based burger developed especially for Iceland is flavored with herbs and spices, has a fleshy texture and is particularly succulent thanks to the inclusion of beetroot extract. This is also what gives the burger it’s ‘bleeding’ quality; when bitten into the patty oozes reddish burger juice, just like its animal-based counterparts.

Iceland’s efforts to create a plant-based product with the flavor, texture and other qualities of meat is particularly useful for people wanting to cut down on their meat consumption, or “meat reducers.”  A study conducted by survey consultants, Censuswide announced last August that 28 percent of people in the UK identify as meat reducers. Many of these people listed the environmental impact of meat as their reason for choosing more plant-based options. Having a meat-like product without the carbon footprint is a win-win situation for beef fans and proves that vegan-friendly foods don’t have to revolve around broccoli.

Following the success of its quarter pounders, Iceland went on to launch a whole plant-based ‘No Bull’ range last September. The new line contained 13 products, including a seasonal ‘No Turkey’ plant-based Christmas dinner for one. This rather inspired ready meal, consisting of plant-based turkey, wild mushrooms, chestnuts, and gravy meant plant-based eaters could pull up to the Christmas dinner table with minimal fuss. Especially in families with different lifestyles and diets, the single-serve vegan option neatly avoided the holiday chef having to cook two dinners. 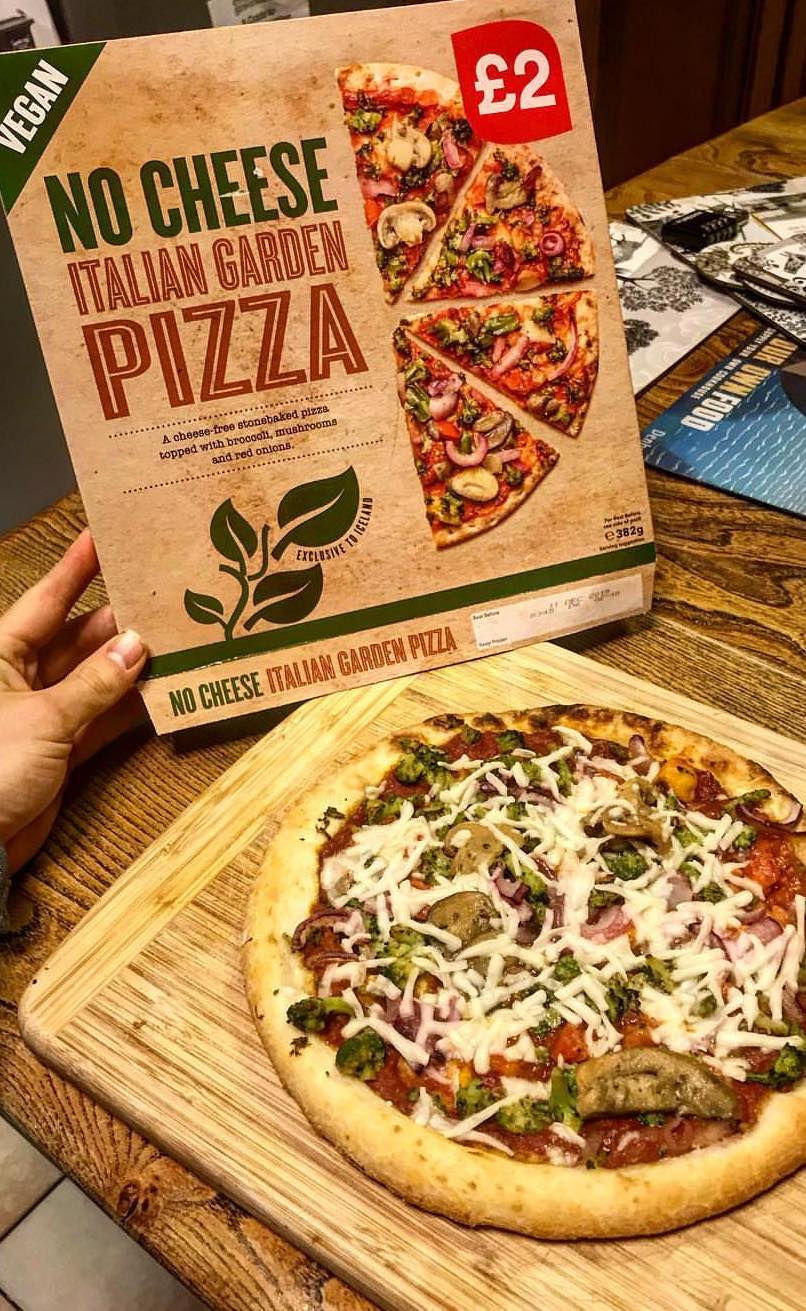 Iceland raised the bar one peg higher when it decided to market not one, but two fully plant-based pizzas. These “No Cheese” pizzas are thin crust and the exclusion of fromage not only makes them suitable for plant-based diets, but it also makes them lower fat and considerably healthier. Of all the animal-derived products eaten in the standard western diet, dairy has been linked to chronic disease in multiple studies. Luckily Iceland’s plant-based pizzas are as dairy-free as they are delicious.

The two ‘No Cheese’ pizzas are:

No Cheese Hummus Pizza, which sounds like it shouldn’t work but is actually like a gorgeous Italian flatbread loaded with toppings. A very nice touch is that the hummus takes on a kind of caramelized quality during the baking process. 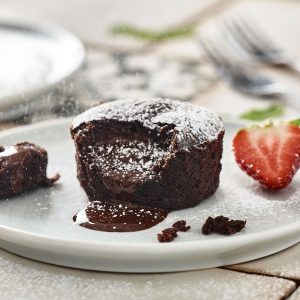 Iceland offers No Moo Chocolate Melt in the Middle Puddings, a dairy-free dessert described as “rich and spongy with an oozing chocolate centre and will ensure that all sweet-toothed shoppers can get their chocolate fix.” It has also launched No Moo Strawberry Cones, similar to Cornettos. The dairy-free strawberry and vanilla ice creams are sold in boxes of four.

Staying true to its affordable roots, almost all of Iceland’s own plant-based products come in at £2, from the pizzas to the sausages. The only exceptions are the No Porkies Vegan chorizo slices which cost £2.50 and the chicken strips and mince which will set customers back £3.50.

Compared to only a handful of years ago when plant-based products were mostly available at expensive health food shops which smelled vaguely of millet, Iceland’s offerings are incredibly accessible and affordable.