Vegan Icelandic powerlifter, Hulda B Waage, aka the “Vegan Viking”, has come away from the Icelandic national championships as the highest ranked female lifter. Waage squatted 215kg, which was 2.5kg above her own personal record.

Despite her success, Waage herself was disappointed with her performance. “I was dissatisfied with my results,” the lifter told Great Vegan Athletes. She added, “We weren’t aiming high for this meet but you know how it is. Always hungry.” The lifter wasn’t all doom and gloom, however. “The atmosphere was amazing,” she stated. “Everyone worked hard at cheering each other. Everyone worked together and helped each other out. The referees were very consistent and fair. So it was very relaxing and fun to compete.”

Waage followed up nationals in a bench only competition the very next day, succeeding in breaking her own personal record. She hopes to continue her success in the European championships in May. “We are training hard for that. Aiming for the limit to be able to compete at world championship,” Waage stated. 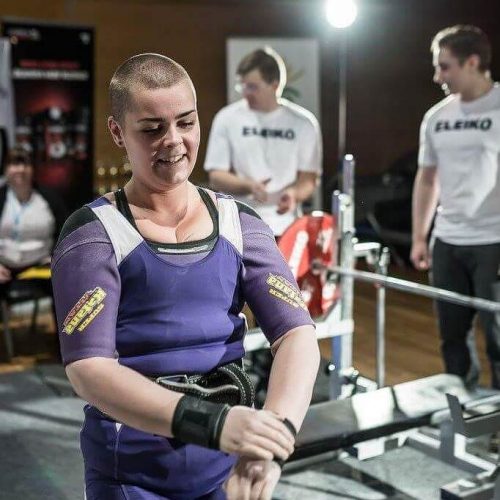 The powerlifter regularly posts updates of her training progress on her Instagram account, along with her vegan recipes. She posted towards the end of last year, “I’m all for eating what you want when you want it…as long as its #vegan. Yesterday I was craving potatoesalad with lots of #mayonnaise dressing and something #bacony…never liked the smoked pigflesh though.”

Waage’s success in her sport proves that animal products are not necessary to raise an athlete to the top of their game. Other vegan athletes include ice skater Meagan Duhamel who recently won gold at the Winter Olympics, NFL player David Carter and footballer Jermaine Defoe who is still playing into is mid 30’s.

“This is me sending a message out to the younger players to say, if you can do what I am doing, and think about what you are eating, then they could play into their late 30’s and early 40’s,” Defoe stated at the beginning of this year.