According to the US Census Bureau, 10.1 percent of the US lay claim to having Irish ancestry.

This is understandable as during the great potato famine of 1845-1852, many thousands of Irish citizens emigrated to the US. They brought with them a rich culture of literature, folklore, knee oscillating dancing and of course, food.

Naturally traditional Irish cuisine is focused around native crops and agriculture, which makes it quite meat and dairy heavy. However, foods like cabbage, oats, scallions, and potatoes also feature strongly—and even traditional foods can be made vegan. 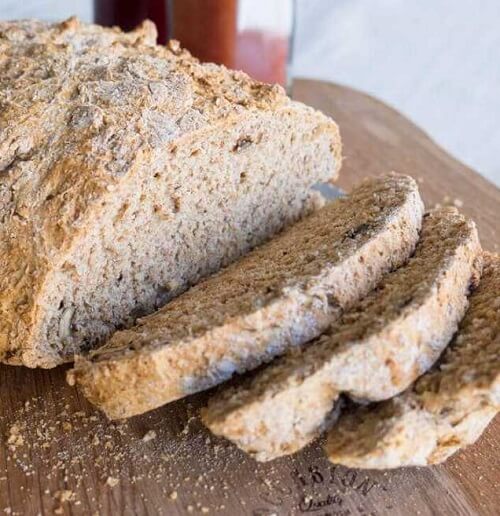 Every country has its national loaf. Italy has ciabatta, Germany has rye and Ireland has delicious soda bread. This spongy, slightly tangy bread gets its name from the baking soda which is used instead of yeast as a raising agent. This recipe includes walnuts for extra bite. 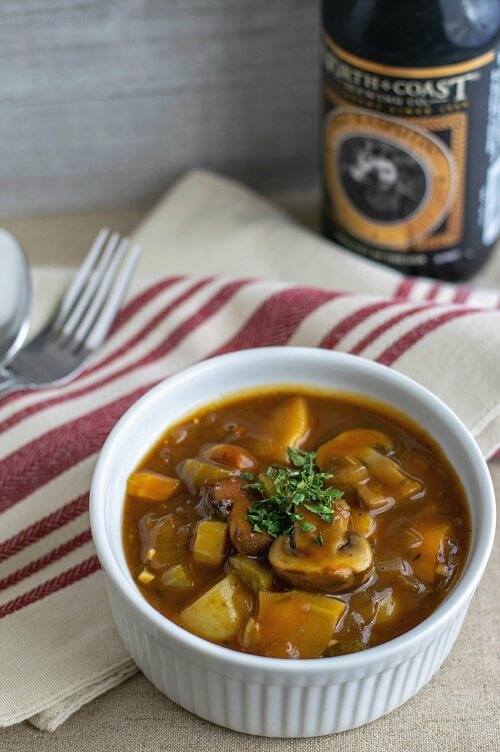 This hearty stew is packed with mushrooms and potatoes. | Brand New Vegan

Usually made with lamb, this hearty stew is instead packed with mushrooms as well as chunky root vegetables. The thick gravy which is made with stout means it’s the perfect dish for supping in front of a roaring fire. As the old craic goes, it is also what policemen in Belfast cry when apprehending a criminal. “Irish stew….in the name of the law!” 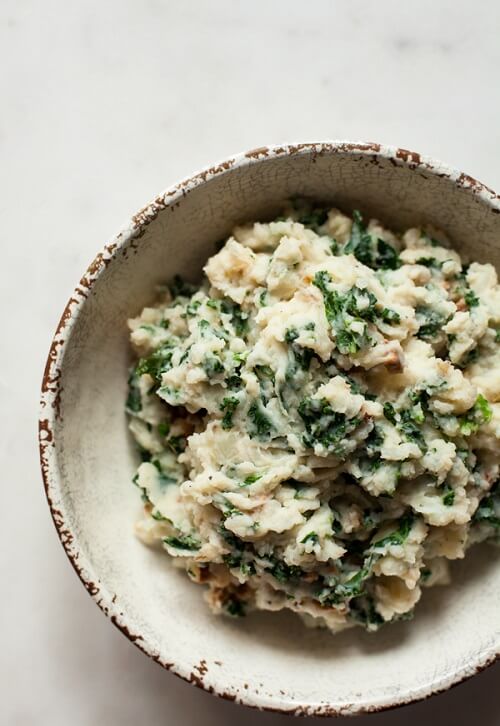 A delicious combination of creamy potatoes and leafy greens. | The Full Helping

Ireland and potatoes go together like England and tea. Although of course, neither plant is native to either country. The potato quickly became the general population’s staple food after being introduced from the Americas in the 16th century. The noble spud can be boiled, roasted, baked, fried, or mashed up with scallions and iron-rich green veg to make vegan colcannon. 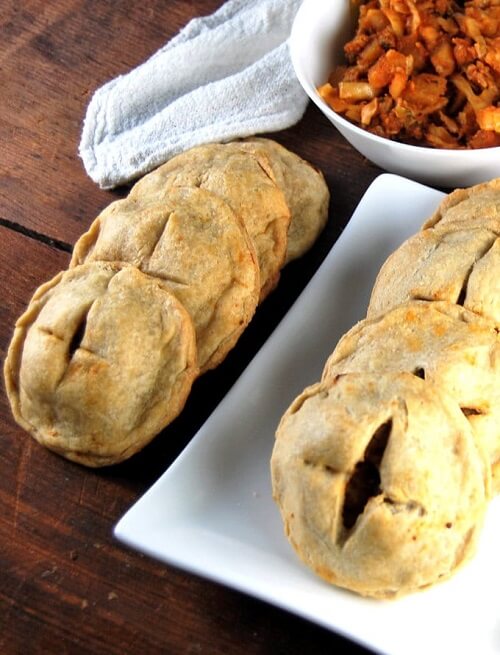 These savoury vegan pies are made with tempeh. | Holy Cow Vegan

These golden pastries are made with cider vinegar and lots of veg. Traditionally made with beef, the chef has added some tempeh for extra texture and flavour. Although these pies are specifically designed for hand-held convenience, we don’t recommend eating and Irish dancing at the same time. 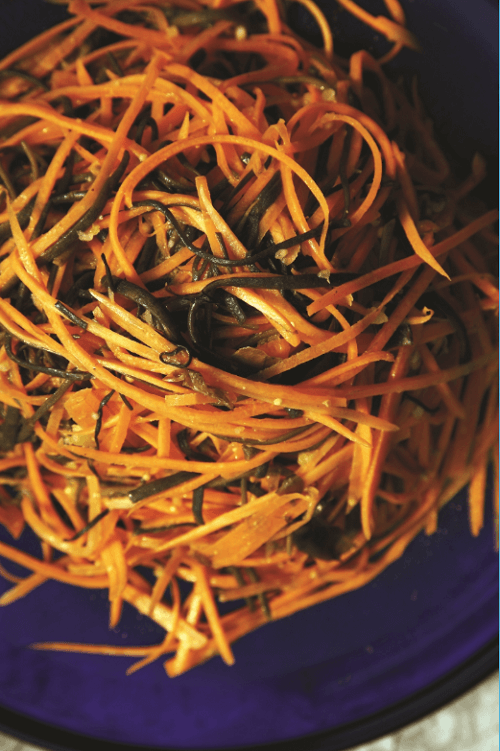 Long before fresh seaweed was recognised as a superfood, people in Ireland would use the plant in soups, salads and as a setting agent (carrageenan.)This modern salad recipe offsets the sea spaghetti’s saltiness with the crunchy sweetness of carrots. 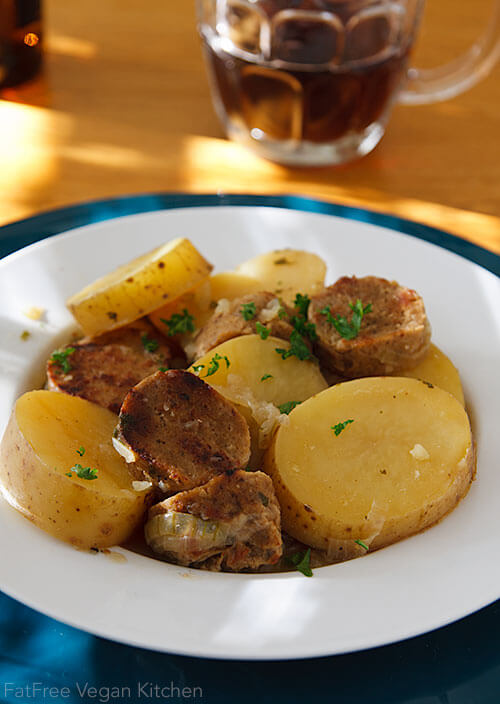 Coddle is traditionally made with leftovers. | Fat Free Vegan Kitchen

Irish cuisine is the king of expediency. Coddle, named after the meal’s cooking method, was traditionally made at the end of the week, when all the household leftovers were put in a pot and coddled (simmered slowly.) Usually containing pork, this recipe is made with vegan sausages. 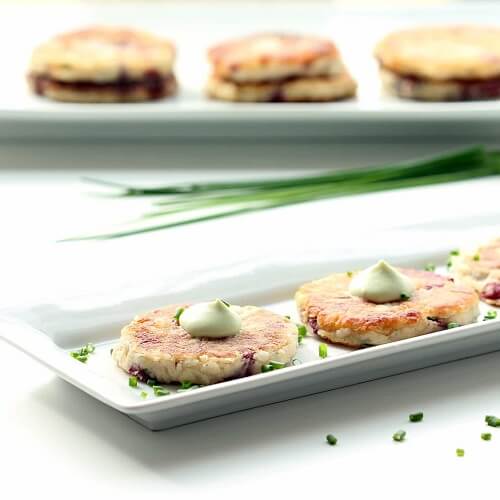 Serve these egg-free potato pancakes with stew or with dairy-free sour cream. | Nutritionicity

Simple but satisfying, these classic Irish potato pancakes can be served as an accompaniment to Irish stew, or on their own for a light snack. Traditionally made with buttermilk, this vegan boxty swaps cashew milk for dairy and throws in vegan mozzarella for good measure. 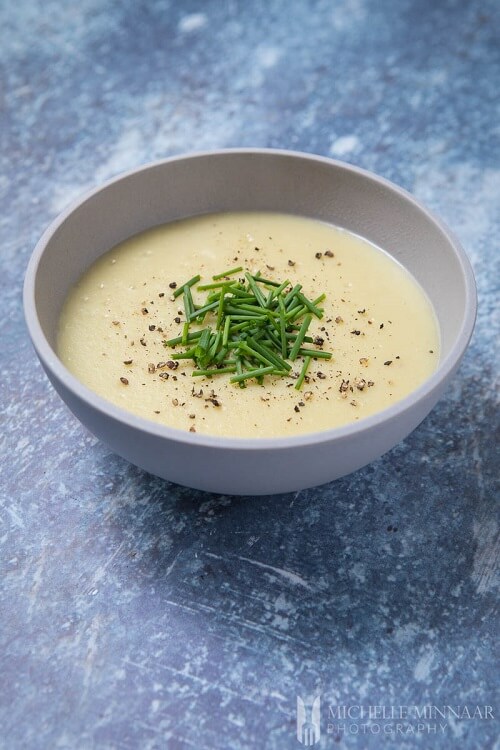 Another rustic dish, this thick soup is extra creamy thanks to a healthy glug of almond milk. It goes particularly well with soda bread. 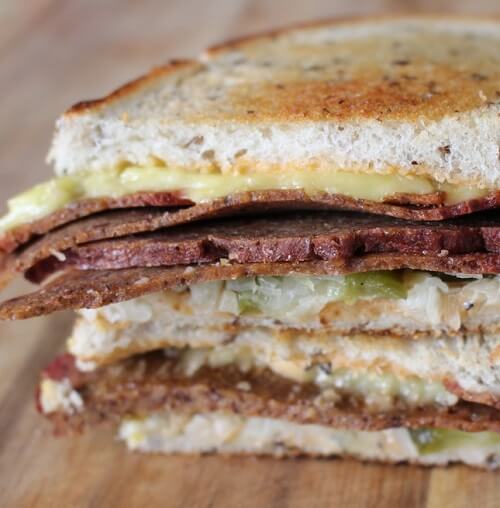 Vegan corned beef was made for reubens like these. | Sarah’s Vegan Kitchen

Along with boiled bacon and buttermilk, corned beef is a popular part of Irish cookery. As a plant-based alternative, this behemoth of a sandwich recipe recreates the salted meat using seitan, a vegan protein made from wheat gluten. 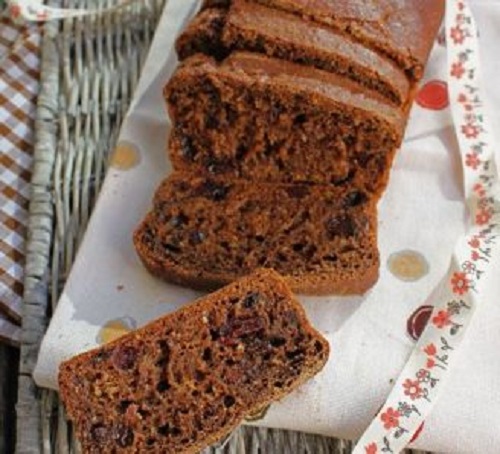 Save room for this Irish tea brack at dessert. | BBC Good Food

Though traditionally baked in a loaf tin, this vegan treat is more like a cake than a bread, slightly chewy and gorgeously syrupy. 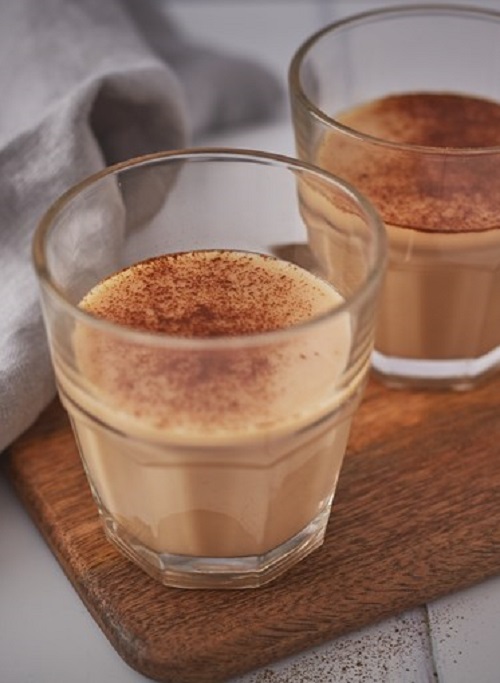 Combining two of Ireland’s most iconic products, whiskey and cream, Irish cream remains one of the most indulgent ways of getting tipsy. This dairy-free version made with coconut cream is every bit as scrumptious as the original and cruelty-free. 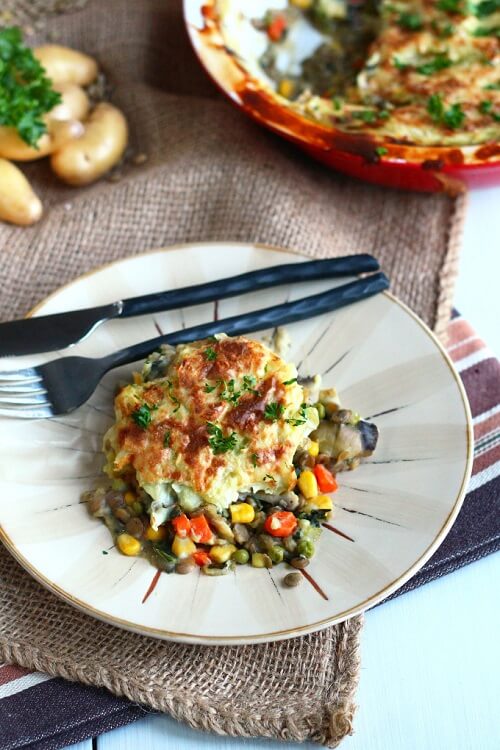 This meat-free shepherd’s pie is packed with lentils and mushrooms. | I Love Vegan

The classic savoury pie, made meat-free. This vegan shepherd’s pie is packed with lentils, mushrooms, and even a helping of leafy greens. It’s topped with rich, creamy mashed potatoes made with dairy-free butter. 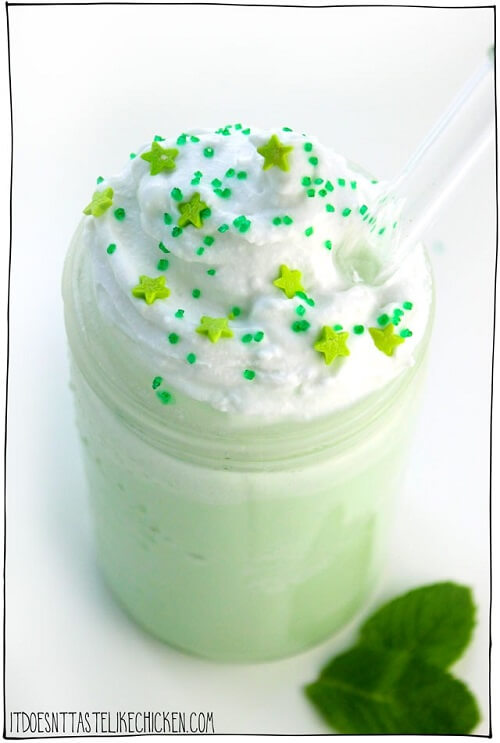 Skip McDonald’s and make a vegan Shamrock Shake. | It Doesn’t Taste Like Chicken 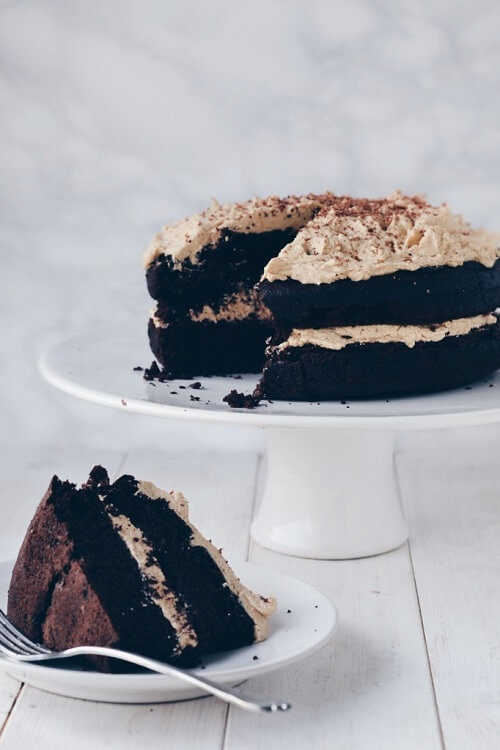 Brewed in Dublin since 1759, Guinness is one of Ireland’s most famous exports. Such is the nation’s love for their stout, that they tend to slosh it into their cooking at any given opportunity. And why not? Since Guinness became completely vegan in 2018, it became the ideal malty ingredient for baking, especially in this dense, dairy-free chocolate cake. 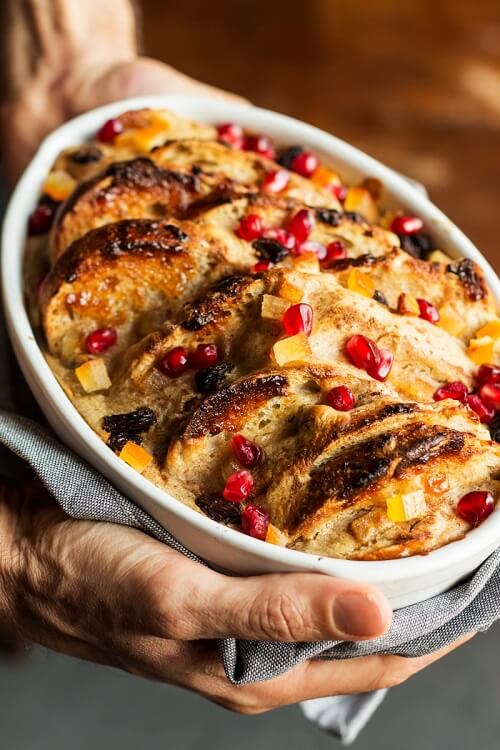 A dish originally created to use up stale bread, this vegan dessert is rich and sweet with a fresh citrus flavour thanks to its marmalade glaze. Why restrict bread to just the main course?