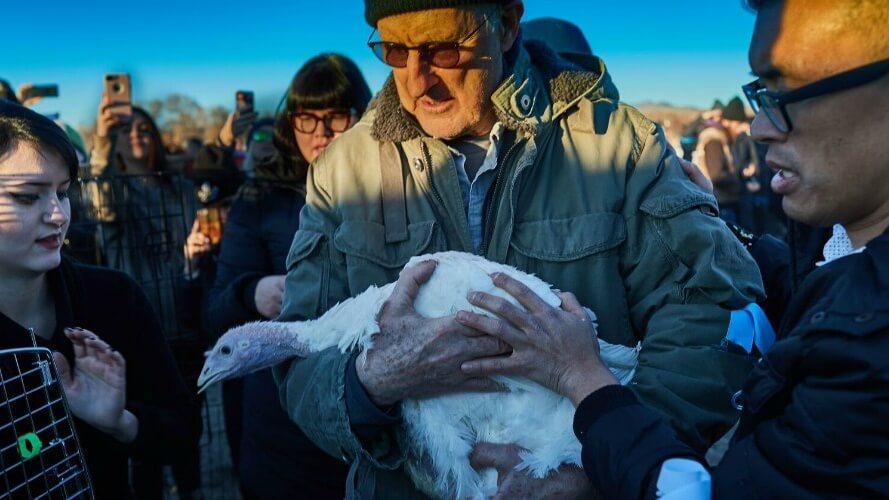 The rescue was organized by Direct Action Everywhere (DxE), an international grassroots network of animal rights advocates, and symbolized an unexpected alliance between the group and the farm owner. According to a DxE statement, the rescue was “the result of an unlikely friendship” between Wayne Hsiung, founder of DxE, and Rick Pitman, the owner of Pitman Family Farms, an agribusiness which recently acquired Norbest.

Showing some “Thanksgiving mercy,” Pitman agreed to release 100 turkeys to the group, who will rehome the birds. Some of the activists involved in the rescue are facing felony charges for previously rescuing turkeys while investigating Norbest.

In 2017, Hsiung led a team in documenting the poor conditions and ill-treatment of animals at barns supplying the Moroni Norbest turkey plant. Hsiung told The Intercept, “In my 20 years of investigating animal abuse, I’ve never seen conditions this horrifying at a corporate farm… It was as bad as it gets.” In a bid to prove that “even adversaries can show compassion this holiday season,” Pitmann facilitated the rescue this week.

Cromwell was among the hundreds of activists who retrieved the turkeys and shared vegan food with the farm workers.

The rescue coincides with the Animal Liberation Western Convergence, a grassroots animal rights conference uniting 600 activists in Salt Lake City. Adding to his growing animal rights repertoire, Cromwell also partook in a protest with Hsuing, carrying dead piglets into Utah’s State Capitol Building in the hopes of influencing state officials to both investigate pork giant Smithfield’s treatment of animals, and to drop charges against animal rescuers.

Founded in 2013 in San Francisco, DxE is known for its direct action tactics to achieve “total animal liberation.” Despite the group’s good intentions in rescuing animals and promoting a vegan lifestyle, DxE has been subject to controversy, including accusations of cult-like behavior and sexual abuse.

In 2015, a group of ex-members issued a letter to the animal rights community, providing a detailed account of an ongoing history of how DxE’s leaders have mistreated, harassed, and gaslighted those with marginalized identities, including women, people of color, and the LGBTQ community. The letter followed an admission to sexual assault by DxE organizer Hugo Dominguez, who stepped down from his role.

DxE gives its own account of the controversy that came to light on its website, “Many of the attacks against DxE come from a small number of individuals… who were asked to depart from DxE spaces due to sexual harassment, assault, and other misconduct.”

The group goes on to say that “DxE organizers continue to be open to any dialogue to resolve conflict.” It also adds that “the vast majority of the animal rights movement has shown us incredible support – animal rights leaders from Ingrid Newkirk at PETA to Bruce Friedrich (formerly Farm Sanctuary, currently Good Food Institute) have publicly vouched for our organizers’ integrity.”

Many local vegan groups and figures in the animal rights community still maintain that the DxE is not only cult-like, but also fails to be a safe space for activists, particularly from an intersectional point of view, and have banned members from organized events.