This Jerk jackfruit recipe is a really impressive starter that will be loved by vegans and non-vegans alike! It’s super flavorsome and has a delicate meaty texture just like pulled pork.

This was my first time cooking with jackfruit and I wasn’t quite sure if it was going to turn out well, but I was super happy with the result! I think the secret to tender jackfruit is too steam it with water/stock for a long time to prevent it from drying out.

This jerk jackfruit recipe was inspired by Gaz Oakley’s BBQ jackfruit lettuce wraps but I adapted it to more Caribbean flavors and made improvements to the method where I thought was necessary.

I used shop-bought jerk marinade for the convenience, but you can have a go at making your own jerk marinade if you prefer and you could also control the spice level a bit better this way too.

I decided to pair this jerk jackfruit recipe with vegan coleslaw as the vegan mayo/yogurt cools down the spice from the jerk marinade. This vegan coleslaw recipe is quite simple, but it still tastes fresh as I added lots of lime and apple cider vinegar. I also topped the lettuce wraps with toasted cashews which added a little extra crunchy texture.

Once you try this Jerk Jackfruit recipe, this will be your go-to starter for any dinner party. Now that I am confident with cooking with jackfruit, I think I’m going to experiment with other marinades in the future such as:

Tinned jackfruit is becoming way easier to source in the UK. I bought mine from Tesco. 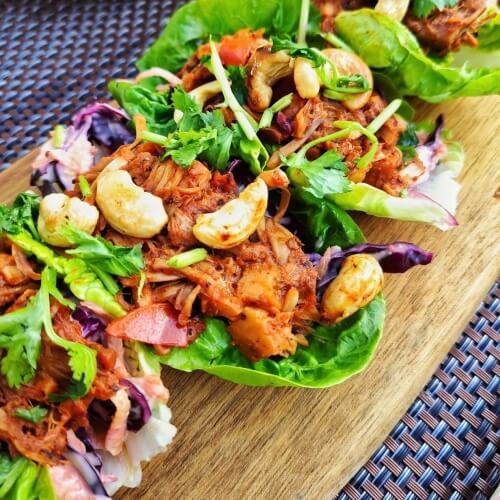 This recipe was republished with permission from Basil and Vogue.