(Updated January 27, 2020) | Vegan scrambled eggs are now available at 63 Whole Foods Markets in the Southern Pacific region. Whole Foods announced the addition to its hot bars last December, stating that the JUST Egg scramble and sandwiches would be available starting early this year.

Stores include those in Arizona, Hawaii, Southern California, and Las Vegas. Some customers have already spotted the JUST Egg scramble at the hot bar.

As well as the cholesterol-free vegan egg, which is made from mung bean protein, the first sandwich will include Gardein sausage and vegan cheddar cheese. The latter replaces the sausage with Lightlife bacon, and the third features Spicy Soyrizo and chipotle aioli. In the future, vegan breakfast pizzas topped with JUST Egg may be available from select pizza stations in-store.

As well as Whole Foods Markets, customers can find JUST Egg in other major retailers across the U.S., including Walmart and Kroger. 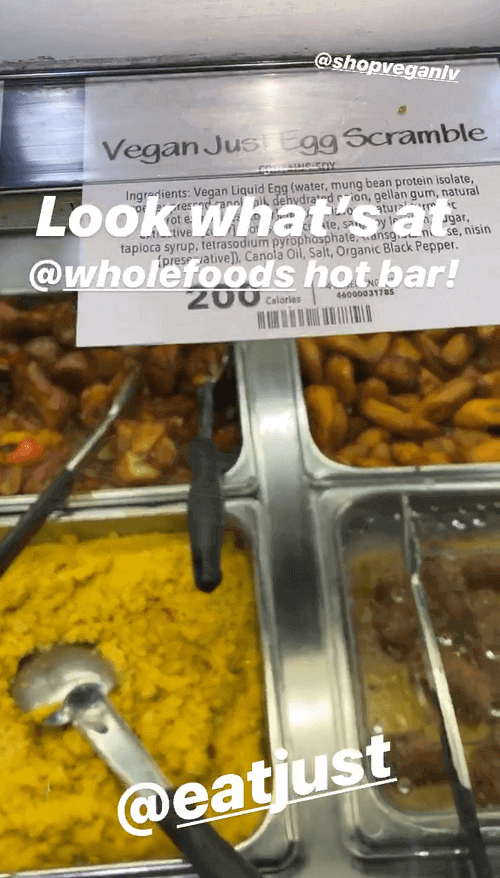 JUST aims to build a more sustainable food system. To do that, it needs to scale up. Last December, it acquired a 30,000-square-foot facility and 40 acres of land in Appleton, Minnesota. The new factory means the company can produce enough protein for 1.5 million vegan eggs in six days. It is now responsible for the majority of JUST’s protein extraction.

“To make our mission happen, we need to scale,” JUST co-founder and CEO Josh Tetrick said in a statement. “Separating the protein from the bean requires talent, proprietary processing and a supportive community. We found all that and more in Appleton.”

The product is popular among consumers. So far, it has sold the equivalent of more than 11 million chicken eggs. It is the number one selling liquid egg in the U.S. natural channel.

The mung bean-based egg is popular for a number of reasons—taste is one of them. Kyle Beechy once wrote for Bon Appetit after trying JUST Egg, “I had to check the label twice to make sure what was on my plate didn’t come from a chicken.”