The ketogenic (or keto, as it’s more commonly known) diet was developed back in the 1920s and 1930s. It was initially created to treat epilepsy, but over the years, doctors have also prescribed it to diabetes patients.

When you think of keto, chances are that you think of lots of animal products. Traditionally, people following the diet eat high fat, low carb animal-based foods — like bacon, eggs, and cheese. But there is such a thing as a vegan keto diet — also known as the “veto” diet. 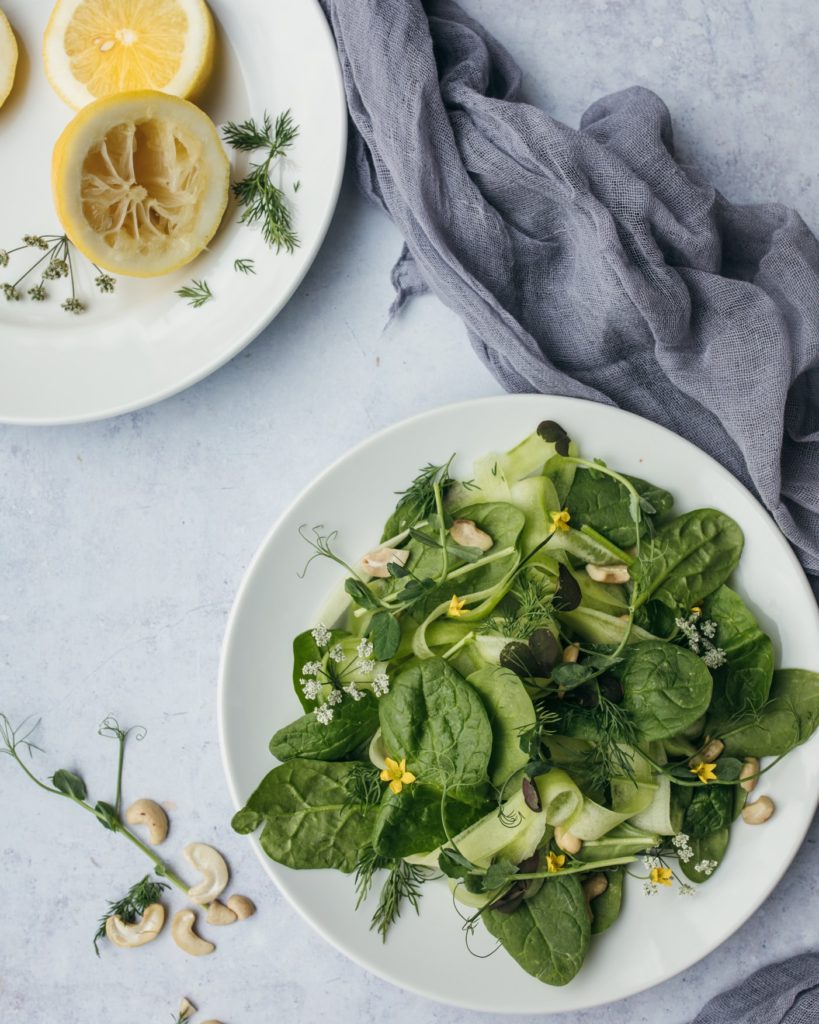 Leafy greens are a must on a vegan keto diet.

What Is The Vegan Keto “Veto” Diet?

Nowadays, people predominantly use the keto diet as a weight-loss tool. They reduce carbs to less than 50 grams per day to reach and maintain ketosis. During ketosis, your body converts fat into compounds, which are called ketones.

The ketones become your body’s main source of energy. This means what you eat has to be high in fat, which is why many who follow the diet usually turn to high-fat animal products. Plant-based foods can be high in fat too, so a vegan keto diet is possible. Avocados, coconut oil, seeds, and nuts can all be eaten on a vegan keto diet. 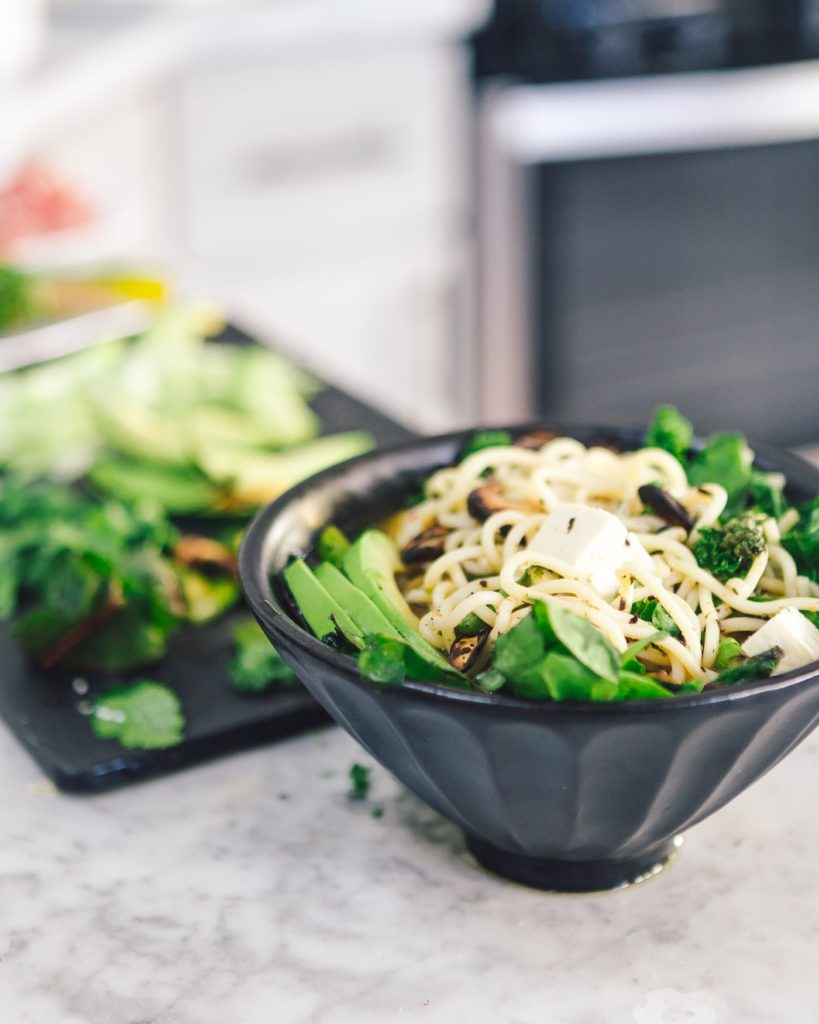 Following a vegan keto diet requires lots of planning ahead.

Is The Vegan Keto Diet Safe?

The meat-heavy keto diet has been criticized widely; U.S. News & World ranked it as one of the worst “fad diets” in a 2018 report. Nutritionist and CNN contributor Lisa Drayer told the Independent, “the keto diet is just not sustainable over the long term. It doesn’t teach you how to acquire healthy eating habits.”

But is the vegan keto diet any better? Harley Street nutritionist Rhiannon Lambert says following a varied whole-food, plant-based diet is the best for your health.

“Combining veganism and a ketogenic diet may be extremely dangerous,” she told The Independent. “You will most likely find yourself very low in energy and lacking essential nutrients from the diet. You just can’t beat a well-balanced diet that includes a variety of complex carbs, proteins, essential fats and plenty of fruit and veg.”

According to cardiologist Dr. Joel Kahn, most of the public is not looking to reverse advanced disease, they’re “trying to eat generally healthy, avoid disease, be kind to animals and the planet, and maintain a healthy weight.” He says that considering a plant ketogenic diet was “quite a leap” as he’s been an outspoken critic of the animal keto fad.

Kubala adds that while studies have been conducted on the keto diet and the vegan diet separately, there isn’t much research available on the two together. She says that both diets have been used effectively as methods for weight loss.

“Being that both vegan and ketogenic diets may benefit your health in similar ways, it’s likely that combining the two by following a vegan keto diet would positively impact health as well,” she adds.

Although Kubala suggests that the meat version of a keto diet has health benefits, research has shown that consuming a lot of animal products — like bacon and cheese — can be a risk. According to a study from April, eating just three rashers of bacon a day can increase the risk of bowel cancer by 20 percent.

Some studies have linked dairy to cancer risk. Doctors from the Physicians Committee for Responsible Medicine have urged the FDA to place breast cancer warnings on cheese products. The doctors say that cheese contains concentrated estrogen from cows. Research has linked estrogen — a female hormone — to an increased risk of breast cancer.

A vegan diet, on the other hand, can reduce the risk of cancer. Cancer Research UK says that if people switched to a plant-based diet, there could be up to 8,800 fewer cancer cases a year in the UK. Studies have also linked plant-based diets with a lower risk of diabetes and heart disease.

How to Eat Vegan Keto

If you’re interested in trying out a vegan keto diet, plan ahead carefully. Here are four fundamental tips to get you started. 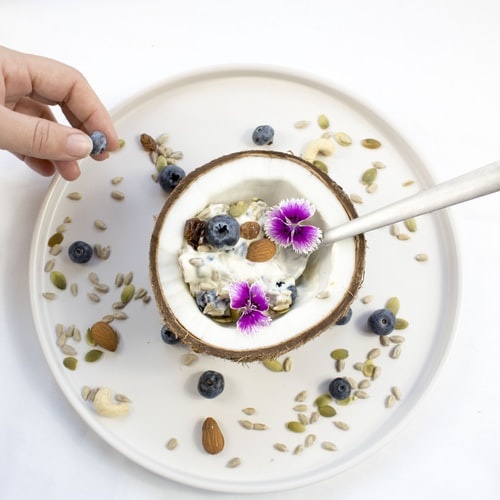 Coconut is high in fat.

Coconut is your new best friend. It’s high in fat and low in carbohydrates.

Opt for full-fat coconut milk, coconut cream, and unsweetened coconut. You can also try coconut yogurts and coconut-based cheese. Coconut is extremely flavorful, adding cream to your curries and soups will make them all the tastier.

The fruit also offers many nutritional benefits. It’s cholesterol-free, low in sodium, and contains vitamin B6, fiber, and iron. It also contains minerals like magnesium, zinc, copper, and selenium. 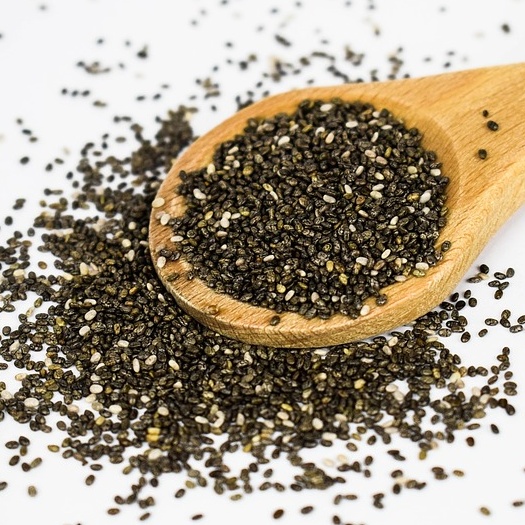 Chia seeds are versatile and nutritious.

Chia seeds are high in fiber and have a very low net carb count. They’re a versatile food to cook with and tend to absorb the flavor of other ingredients. Another breakfast suggestion from Kubala is “chia pudding made with full-fat coconut milk topped with sliced almonds.”

Chia seeds are highly nutritious. According to nutrition researcher Kris Gurnas, BSc, they are “among the healthiest foods on the planet.” He writes for Healthline, “they’re loaded with nutrients that can have important benefits for your body and brain.”

They contain antioxidants and omega-3. They also contain fiber, protein, fat, calcium, manganese, magnesium, and phosphorous, as well as zinc, vitamins B1, B2, and B3, and potassium. 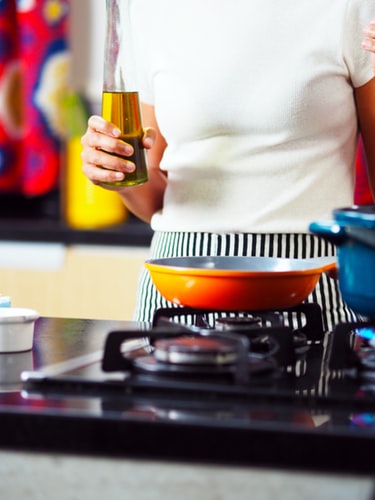 Cook with a variety of oils. 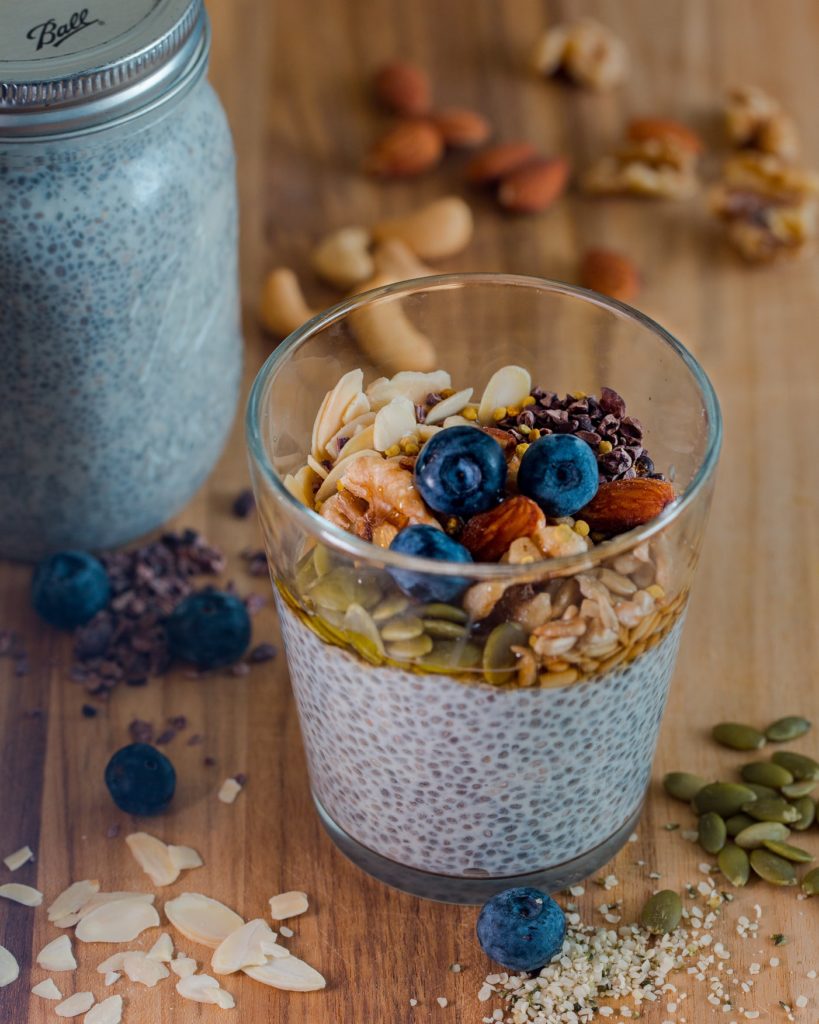 When following a vegan keto diet, eat as many different foods as you can.

4. Eat a Variety of Foods

Even though the vegan keto diet is restrictive by nature, it’s important to ensure that you are getting as varied a diet as possible.

Eat lots of fruits and vegetables, you can opt for non-starchy ones, like leafy greens, Brussel sprouts, zucchini, broccoli, cauliflower, peppers, and mushrooms. Enjoy avocados and opt for blueberries, blackberries, and raspberries in moderation.

You should eat lots of nuts and seeds, including pumpkin seeds, hemp seeds, and macadamia nuts, and opt for vegan protein sources like full-fat tofu and tempeh. You can consume vegan full-fat “dairy” products, so eat products like cashew cheese and vegan cream cheese.