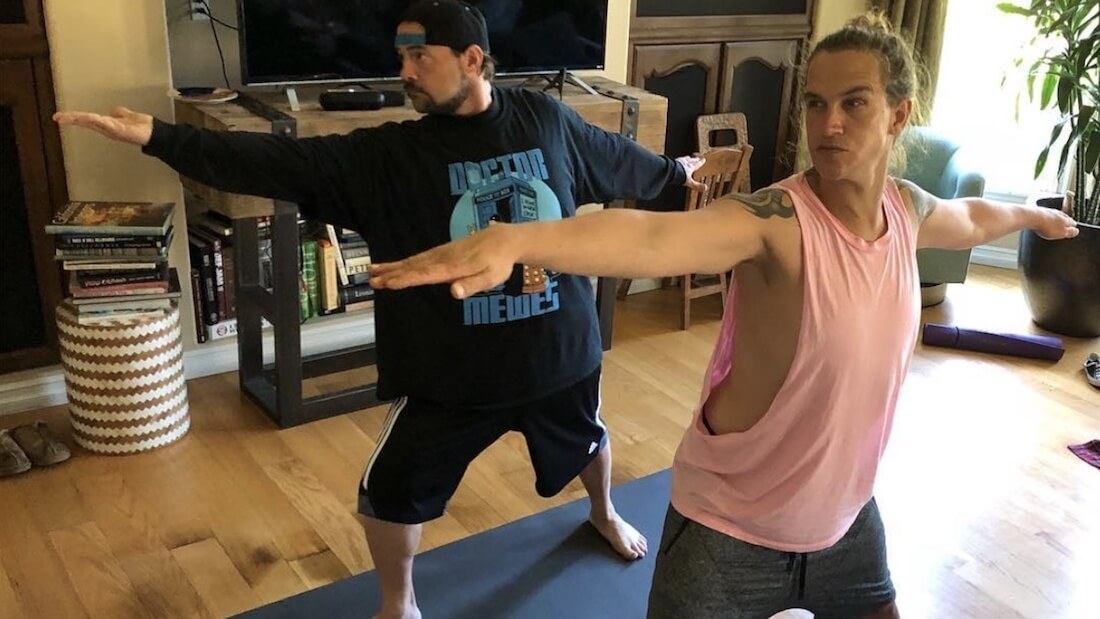 In the film, Smith portrays Silent Bob alongside his co-star Jason Mewes, or Jay. The characters have been known to appear or at least be referenced in nearly every Smith production, which is collectively known as the “View Askewniverse.” The pair are complete foils. Silent Bob is true to his name – quiet, observant, intelligent. Jay is a crude chatterbox without wit. However, the two are inseparable – best friends since stroller days.

Although the reboot promises to bring these fan-favorite characters back to life, a few adjustments had to be made to account for Smith’s recent weight loss – which he accomplished by eating a vegan diet. The new script will exclude the fat jokes about Silent Bob that were common in the original film. That being said, Smith is in the clear to practice a fitness routine, like yoga.

SMotivation: While walking Shecky back in August of 2013, a hidden paparazzi snapped pics of me that wound up on the @dailymail website. It was pretty humiliating, to say the least. So in an attempt at a Daily do-over, here’s an image of what I look like 5 years later while walking the same diminutive dog (photo by @harleyquinnsmith). Just saw my cardiologist (husband of @rikki_ladenheim_events) and he says I’m doing great since the heart attack. Next up: I’ll be adding a serious exercise regimen, beyond just all the dog-walking. And a side note to my friends and family: I’ve lost my phone. I’ll be getting it replaced, which means I’ll have a new phone number now. If you get texts from a number you don’t recognize, it’s probably me. I’ll use the safe word “PillowPants.” #KevinSmith #dogwalker #dogwalking #weightlossjourney #weightlosstransformation #weightwatchers #shecky #dailymail #SMotivation

The actor posted a photo of himself and Mewes on Instagram in a Warrior Two pose. The caption read, “Namaste! See @jayandsilentbob Do Yoga!…It won’t be long before the #jayandsilentbobreboot shoot is upon us, so we two old timers are not only trying to look like leading men again, we’re building core strength for all the running around and stunts we’ve got planned for the dopey duo’s second cinematic outing, nearly 20 years after the first! I just did a pass of the Reboot script in which I removed all the fat jokes (and swapped them with vegan jokes) because this @weightwatchers Ambassador is currently down to 201 pounds!”

Smith is a relatively recent vegan. He made the switch in February following a sudden heart attack, and he seems to be thriving on a plant-based diet. In April, he told the TODAY show, “Honestly the heart attack was the best thing that ever happened to me.” Not only has he lost over 50 pounds, he has been repeatedly quoted for ‘feeling great’ and ‘so fantastic.’ He has also become a Weight Watchers Ambassador to inspire others on their own weight loss journeys.