All Little Secrets candy is made using fair trade chocolate. According to vegan social justice nonprofit The Food Empowerment Project, much of the chocolate used by major brands like Hershey’s and Nestlé — which owns KitKats — are sourced from West African cacao farms connected to child labor, slavery, and human trafficking.

Founded in 2015, brand recently received an undisclosed investment from Boulder-based accelerator Sunrise Strategic Partners in order to increase distribution and marketing efforts across the US. “Better for you” versions of candy and snacks are a growing trend among consumers, reflecting an increased interest in health and wellness, according to Forbes. Whole Foods in particular is focusing on this. 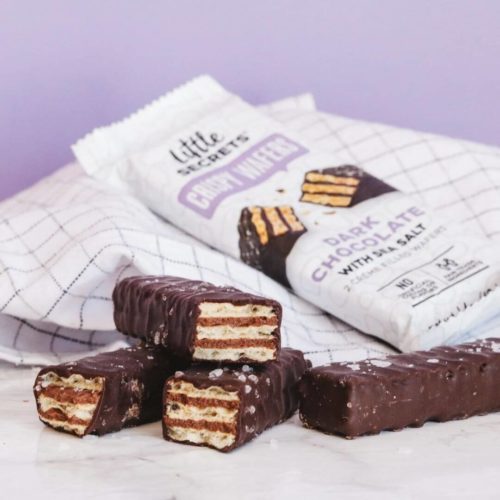 “When I started Little Secrets, I wanted to create a chocolate candy that was delicious and a slightly less guilty pleasure. I’m now looking forward to expanding our product line across other proven forms and to bringing Little Secrets to more consumers across the country,” said Chris Mears, CEO and founder.

Are There Vegan KitKats?

Created in 1935 by English confectionery Rowntree’s of York, KitKats are world-renowned — Japan, for example, has had more than 300 special flavors since 2000, including green tea, azuki bean, and sakura blossom. But there has never been a vegan version in the candy brand’s 84-year history.

Other vegan options include M&M’s-style candies in the flavors Sea Salted Peanut, Dark Chocolate, and Sea Salted Almond. The candies are similar to those made by UnReal, which makes dairy-free peanut butter cups and dark chocolate “gems”. Like UnReal, Little Secrets uses plant-based food coloring for its candy coating instead of artificial dyes.