By Basil & Vogue
Jump to recipe

If you fancy making something a bit more special than your regular meals, then this roasted Korean Cauliflower Wings recipe is perfect! The homemade sticky soy sauce is so indulgent and super easy to make, too.

It was my parents’ 35th wedding anniversary last weekend. They couldn’t go out for a meal due to UK lockdown. So, I gave myself the challenge of recreating the ‘restaurant experience’ at home. I cooked a three-course vegan meal for them. I cook at home regularly. But I wanted to make something that was fancier. Since it was for a special occasion. It was a difficult task as my dad is a hardcore meat eater and supercritical of vegan meals. So, I had to do a lot of research!

I chose Asian/tropical theme for the three-course dinner as these are flavours my parents usually only eat when they go out to restaurants. For this post, I’ll focus on what I made for starters. After much research and amalgamation of recipes, I decided that these baked Korean Cauliflower Wings would be my best bet for a show-stopper starter! They’re inspired by chicken wings in that the florets look like chicken wings once cooked. And the sticky sauce is similar to what you would expect from Asian-style wings.

This Korean Cauliflower Wings recipe is relatively straight forward. This is in comparison to many other cauliflower recipes I’d come across. This is because it doesn’t require a multi-stage process to coat the florets. It’s an absolute messy nightmare trying to dip battered food in breadcrumbs! The sticky sauce is super simple to make. And I will definitely be making this again to use in other Asian recipes rather than buying inferior and more expensive shop-bought versions!

To make these cauliflower wings authentically Korean you can use Gochujang paste instead of Sriracha. Gochujang paste is a Korean hot chili paste. Whereas Sriracha is more Thai. However, this is harder to find in general supermarket retailers, so if not Sriracha is fine. 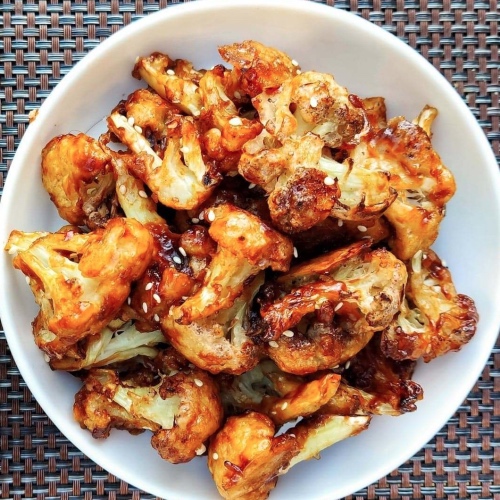 If you enjoyed my cauliflower wings recipe, try making this macaroni salad for your next cookout. Or grill up these homemade black bean and beet burgers!

This recipe was republished with permission from Basil and Vogue.