The 56-year-old set a new record for the 200-meter backstroke, beating the previous record set in 2015 by just one second. Esselstyn credits his victory to his whole food, plant-based diet, which avoids processed sugar, flour, and oil in addition to animal products. “Plants are the cleanest burning fuel. They reduce inflammation, shorten recovery time and improve cardiovascular function. I am certain that my ability to catch a World Record at this stage of my life is 100 percent directly tied to how I eat,” he told LIVEKINDLY.

The former firefighter explained that his diet allows him to maintain optimal weight for moving quickly and efficiently through water. A plant-based diet is also ideal for recovery and training for both strength and endurance. It also leads to better blood flow for working muscles, Esselstyn explained: “Plants allow the 65,000 miles of my vessels to bound with nitric oxide, one of the best vasodilators (they allow the vessels to dilate open).”

Speaking on his world record-breaking finish, Esselstyn said: “I felt so relieved and so happy and so psyched because I had put this big, scary, intimidating goal out there in front of me and I was able to conquer it.” 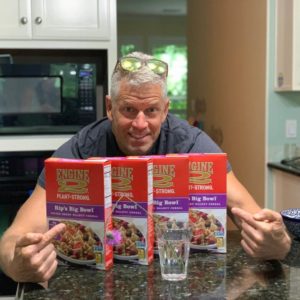 Esselstyn is the founder of The Engine 2 Diet and author of the 2009 book of the same name. The program promotes an unprocessed vegan diet that’s low in fat and free from added oils as a means to help prevent chronic health issues like heart disease. He was inspired by the findings of his father, physician Caldwell Esselstyn, author of 2007’s “Prevent and Reverse Heart Disease,” which advocates for a whole food, plant-based diet.

The Engine 2 Diet founder also served as an executive producer on James Cameron’s upcoming documentary, “The Game Changers.” The film deconstructs the myth that you need meat to be strong by showcasing vegan athletes from all sports, including five-time Formula One champion Lewis Hamilton, seven-time USA Cycling National Champion and Olympic silver medalist Dotsie Bausch, and more. The movie is set to release in September.

Esselstyn had set out to his race with the intention of beating the record. His words of advice to others are to “put something out there in front of you. And if you want to share it with a couple people for accountability reasons and whether you win, whether you lose, whether you draw, you will not regret it and will make your life that much more rich and fulfilling.”