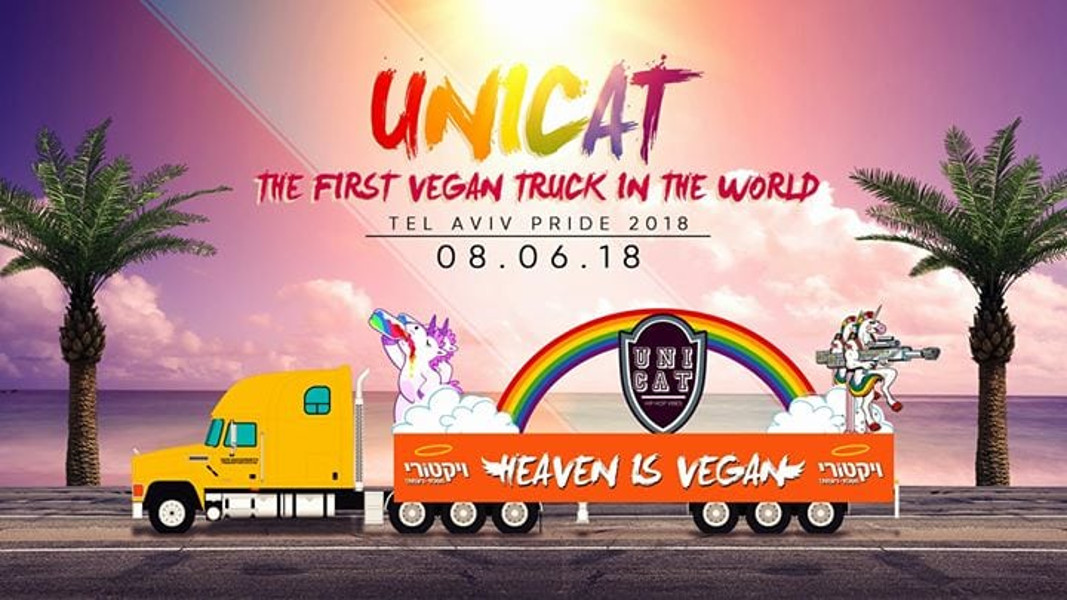 A vegan-themed truck claiming to be the “first vegan truck in the world” made an appearance at this year’s Tel Aviv Pride Parade in June. The truck was the creation of Unicat, a local hip-hop club that aims to promote kindness towards animals and the LGBTQIA+ community.

On the side of the truck, the message “heaven is vegan” was displayed, and on top, the Unicat’s signature rainbow-maned unicorns could be seen. An assortment of entertainers were featured on the float, including pop artists Shay Susanna and Miss Tarrance, and DJs Alon Malul and Moran Singolda. Vegan leaders Tal Gilboa, Almog Shor, Gadi Wilcharsky, Aviad Bavli, and Chen Tal also appeared.

“This year the Unicat leads the world’s first vegan truck! Come and march with us,” the club wrote on its official Facebook page. “UNICAT accepts and loves everyone!”

“Let’s walk alongside the Unicat truck, our vegan paradise, to take part in history that comes to promote a double message, a union of struggles to represent justice and equality to the Almighty,” stated the event page. Unicat also welcomed Pride parade attendees to join in an all-inclusive afterparty celebrating its three-year anniversary.

Unicat was founded in 2015 as a safe space for people of all genders and sexualities to have fun. With its zero-tolerance policy against all forms of bigotry, the club quickly became a staple in the community. In 2016, UNICAT even headlined the main stage of the Tel Aviv Pride parade.

The Israeli vegan movement has grown strong in recent years and has received many accolades for its wealth of plant-based options. Last February, the Middle Eastern nation was named as one of the top vegan destinations for tourists in the world and Tel Aviv has even been recognized as the “vegan capital of the world” by British newspaper, the Independent. A representative from travel company Tel Aviv Tours has also sung the praises of the city’s strong vegan restaurant scene.