And yet, despite how common it is, many are embarrassed by IBS. According to one 2018 survey, nearly half of Brits will try to put off visiting the doctor if they suspect they have the gut problem, which can cause bloating, cramps, diarrhea, and constipation.

There is an urgent need to break the taboo around IBS. It’s painful, uncomfortable, but most importantly, it’s treatable. For many, IBS symptoms are worsened by certain foods.

If you suspect you have the condition, you should visit your doctor. One of the things they may advise as part of your treatment is a low-FODMAP diet.

FODMAP stands for fermentable oligosaccharides, disaccharides, monosaccharides, and polyols. Essentially, these are short-chain carbohydrates found in a number of foods, including wheat, dairy, figs, and mangos.

FODMAPs are resistant to digestion, so the majority reach the end of the intestine unchanged. When in the colon, they are fermented by gut bacteria, which produces hydrogen. It’s the hydrogen that can cause IBS symptoms in some people.

FODMAP foods do not directly cause IBS, but limiting them may help to relieve some of the symptoms.

Eating a low-FODMAP diet is restrictive, even more so if you’re vegan. But that’s where Fody Foods comes in. The Canadian brand is on a mission to simultaneously break the stigma around IBS and provide an array of healthy, tasty, plant-based low-FODMAP options for people with digestive and gastrointestinal problems. 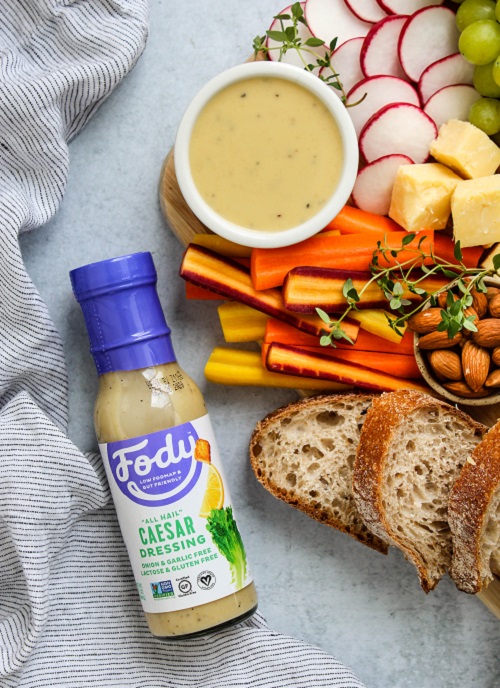 Its product range is wide, filled with pantry staples. “Fody exists to help those with digestive troubles live life to the fullest by participating in life’s greatest yet simplest pleasures, such as sharing a snack or meal with friends,” the brand’s founder Steven J. Singer told LIVEKINDLY.

The range includes sauces, marinades, and dressings, like its ultra-flavorful, slightly spicy Korean BBQ Sauce & Marinade, its sweet and creamy Maple Dijon Salad Dressing, and its light and zingy Caesar Salad Dressing. The latter is the first vegan, onion-free, and garlic-free dressing of its kind on the market.

There are also snack bars, like its crunchy, indulgent Dark Chocolate Nuts & Sea Salt bars. These are sweetened with low FODMAP maple syrup, instead of honey or agave. While the latter two are used to sweeten many other snack bars on the market, both are high FODMAP foods.

Pasta sauces, oils, spices, and salsa are also available from Fody Foods. Everything is, of course, low-FODMAP. All products are onion-free, garlic-free, gluten-free, lactose-free, non-GMO, and gut-friendly. 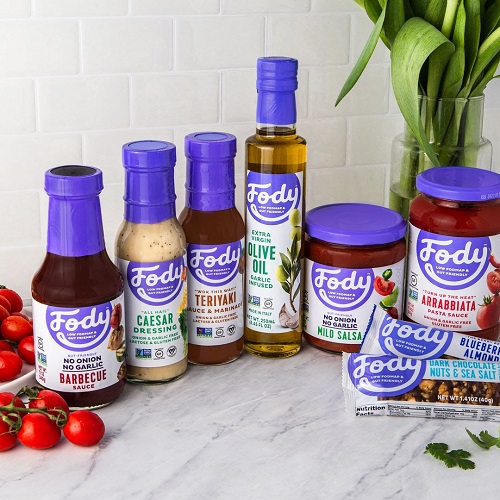 Fody Foods’s main goal is to make eating easier for people with IBS and other digestive problems. But the brand cares about its supply chain as much as it cares about its customers. It’s a certified B corporation, balancing purpose with profit. Its B corp status requires it to consider the human and environmental impact of every business decision.

“When I first set out to make a line of gut-healthy foods for people with digestive issues, it became my passion,” Singer added. “Not only are our vegan, gluten-free products safe for sensitive stomachs, but they are also made with carefully sourced, real ingredients and are absolutely delicious.” 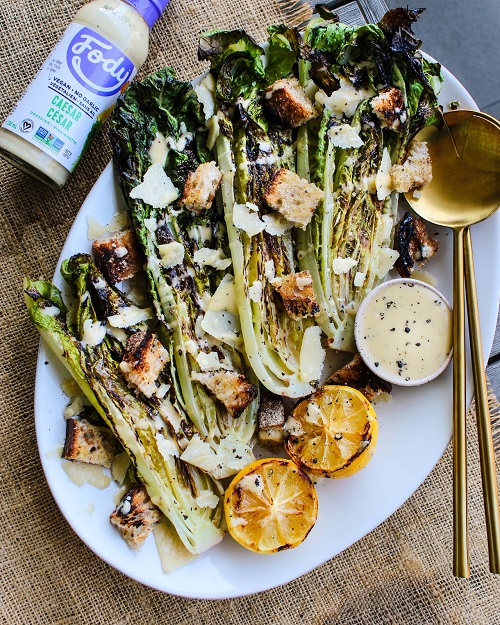 Food for sensitive stomachs can be tricky to find: Fody Foods wants to fix that.

Want to try for yourself? Fody Foods products are available in Canada, the U.S., Europe, and Australia. They’re in a number of grocery stores, including Whole Foods, Sprouts, and Wegmans.

Alternatively, you can visit their website to order. Use the code LIVEKINDLY15 for 15 percent off.