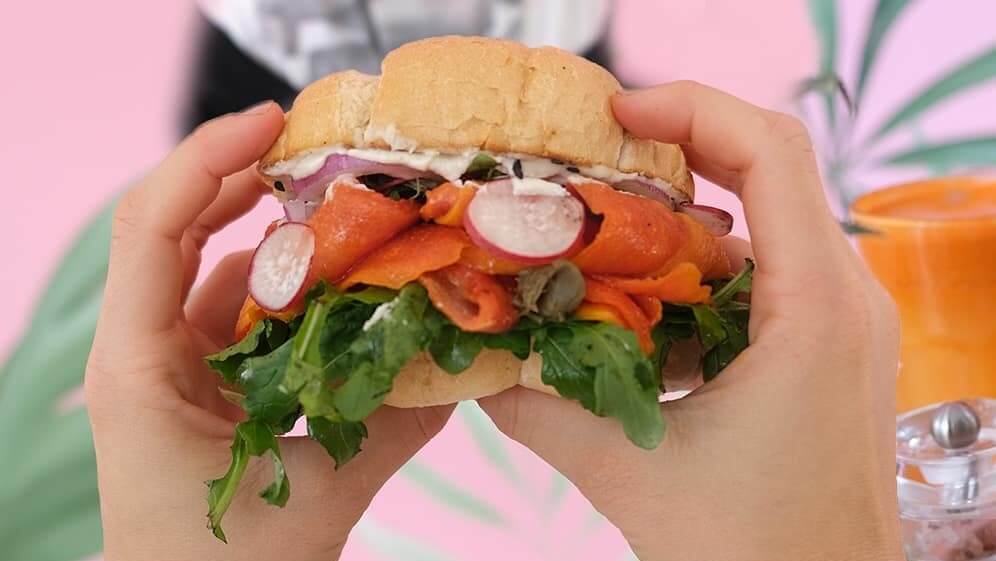 Johannesburg vegan restaurant Kaylee’s Eatery has figured out how to make salmon that looks, tastes, and even smells like lox using only papaya fruit.

Many chefs use carrots to create vegan lox, however, the Kaylee’s Eatery team – Kaylee Gottschalk, Dan Fredman, and chef Josh Simon –  deemed the water content of the vegetable to be too high for its plant-based “Lox” bagel served with cashew cream cheese.

Instead, they looked to fruit. According to the trio, when sliced thinly, soaked in a smoky marinade, and dehydrated for several hours, papaya can convincingly mimic the taste and texture of fish.

For those who want a meatier dish, the team are also looking to create meatballs for stews and mince for lasagne using extracted pea protein.

“Plant-based eating is delicious, cruelty-free, and most of all sustainable,” Gottschalk told Eat Out magazine when asked about why she was creating the vegan versions of popular foods; the eatery also creates scrambled eggs out of tofu and serves vegan bacon.

“Whether you’re a yoga-loving sort of girl, a run in the park with your dog kind of guy. There is something here that is good for your body, mind, and for the planet,” the restaurant’s Facebook page notes. “At Kaylee’s, we try only to use the freshest and most seasonal ingredients to create our flavourful and full of good meals.”

It continues, “Yes, even our signature ‘salmon’ that you’re about to devour is plant-based, full of nutrients and cruelty-free.”

Around the world, as consumers become increasingly aware of the negative consequences of overfishing, more and more vegan versions of popular fish dishes, such as smoked salmon, are becoming available.

In London, GreenBay – the city’s first vegan supermarket – offers Veggie Marine Salmon, made from algae. According to the business, thanks to its soft texture and fishy taste, it’s just like eating the real thing.