Last year, Whole Foods Market launched vegan macaroni and cheese at hot bars in 55 locations in the Pacific Southwest region. The plant-based dish was a result of the company’s partnership with Chef Ayindé Howell, a trained chef and creator of Mac & Yease.

Now, the company has added the option to hot bars in 44 stores in the Northern California region.

Howell created the dish years ago, adapting it from his grandmother’s original, non-vegan recipe. The Mac & Yease became an instant hit when Howell began serving it as a side dish at his former Seatle-based quick-service concept, Hillside Quickies Vegan Sandwich Shop.

The Mac & Yease has debuted at several festivals and pop-ups, including 2018’s Coachella, but now, this vegan mac will be available on the daily at even more select Whole Foods. 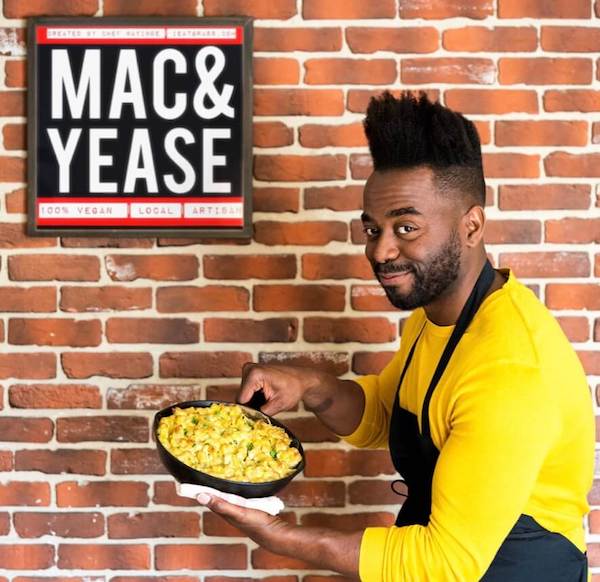 “[Howell’s] Original Mac & Yease is one of the best Southern-style, baked vegan macaroni and cheeses we’ve ever tasted and our customers are going to love it. It’s actually very similar in flavor to a traditional dairy-based macaroni and cheese and has developed a strong fan base around Los Angeles,” praised Corey Smith, the prepared foods coordinator for the Whole Foods Market’s Southern Pacific region, last year.

The vegan option isn’t just for the busy adults looking to grab a hot meal after a long day at work. Mac & Yease is for kids, according to Howell. When accompanied by plant-based proteins and other whole foods, Howell’s vegan Mac and Yease is an entry point for children to transition to healthier diets.

The chef explained, “So often as vegans in the food industry, we focus on impressing adults. As a person who grew up a vegan child, I longed for options when I went out to eat and so often couldn’t. I want to give back to that vegan child today, so they never feel hungry, or weird, or left out.”

The Mac & Yease will be available in Northern California Whole Food Markets throughout April. If popular, it may become a permanent feature on the hot bar menu.

Beyond Meat Takes Over Carl’s Jr. Menu for Earth Day

Dairy-Free Does a Body Good: Why Miyoko’s Is The Way Forward For This Olympian

No, Your Diet Doesn’t Actually Need to Include Eggs