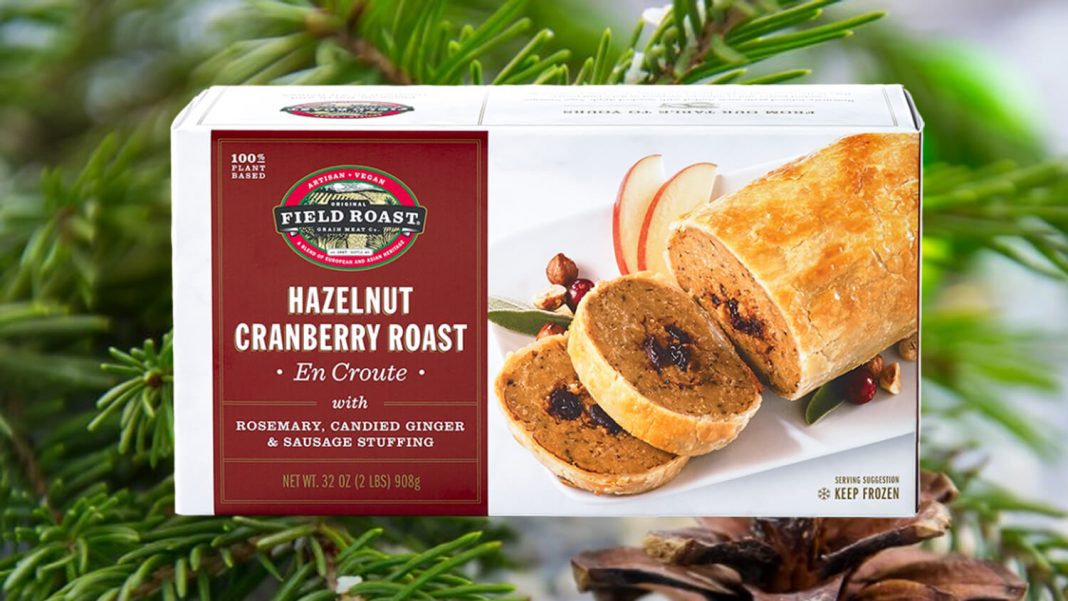 Founded in Seattle in 1997, Field Roast labels itself as a pioneer in the plant-based meat market. Its aim isn’t to mimic the texture of traditional meat, but rather to satisfy consumers by creating artisanal vegan products out of grains, vegetables, and legumes.

Once a niche brand, Field Roast is now part of a global vegan meat movement, as consumers opt for more plant-based products for their health, the environment, and for the animals. According to new research, 52 percent of Americans are now trying to eat more vegan food.

For the festive period, the brand offers a number of different products – from its Classic Meatloaf to its Hazelnut Cranberry En Croute, stuffed with Field Roast sausages and crystallized ginger. But its one-pound Celebration Roast – launched in 2003 – raised the game for the brand.

100,000 + growing! We’re so grateful for each and every one of you. So to celebrate you, for every 100 likes on this post, one lucky commenter will win a free product. Thanks for being a part of our family, because we’re nothing without you.

According to Field Roast, after the Celebration Roast was launched, the company began to witness significant sales growth. This success was followed by its launch of the two-pound Celebration Roast, complete with mushroom gravy and traditional bread stuffing. And the sales kept rolling in, as now, it has sold nearly five million pounds worth of its signature roasts.

But according to the brand, it is not all down to the taste of its products. A lot of its success has inevitably come from the growth of the vegan market, and the ability of Field Roast to expand alongside it.

“As we approach this timely company benchmark, it is inspiring to reflect on the expedited growth of the plant-based category, and how the Field Roast brand has developed in conjunction,” said Dan Curtin, the president of the brand, in a statement.

He added, “Given that the holiday season can be a difficult time for those seeking meat alternatives, we’re proud to be the leader and innovator in providing the plant-based options around the holiday dinner table.”

Field Roast’s products are available from a number of stores across the U.S., including Whole Foods, Kroger, Walmart, and Target.