Upton’s Naturals has made a 50lb burger cake to celebrate its 13th birthday at its Chicago based vegan cafe, Upton’s Breakroom. The company specializes in plant-based meats and comfort food, including seitan, jackfruit, and vegan mac ‘n’ cheese.

“Last week we celebrated our 13th anniversary at our Chicago vegan cafe Upton’s Breakroom,” said Upton’s Naturals on Instagram. “We offered an all-day Vegan Dollar Menu and rolled out this beautiful beast, the Very Big Burger. We made two giant Classic Burgers, weighing nearly 20 lbs each.”

“We topped it with 2 lbs sliced tomato, 1 lb lettuce, 1 lb pickles and 1/4 cup each vegan mayonnaise, mustard, and ketchup,” the company continued. “The crowning glory was Very Big Bacon, supersized strips of Bacon Seitan weighing in at 5 lbs. After everyone got a selfie, we carved it up and fed it to the crowd!”

To create the giant burger, Upton’s also collaborated with Highland Baking Co. who custom-baked a gigantic 7lb bun to match the 40lbs of vegan meat. 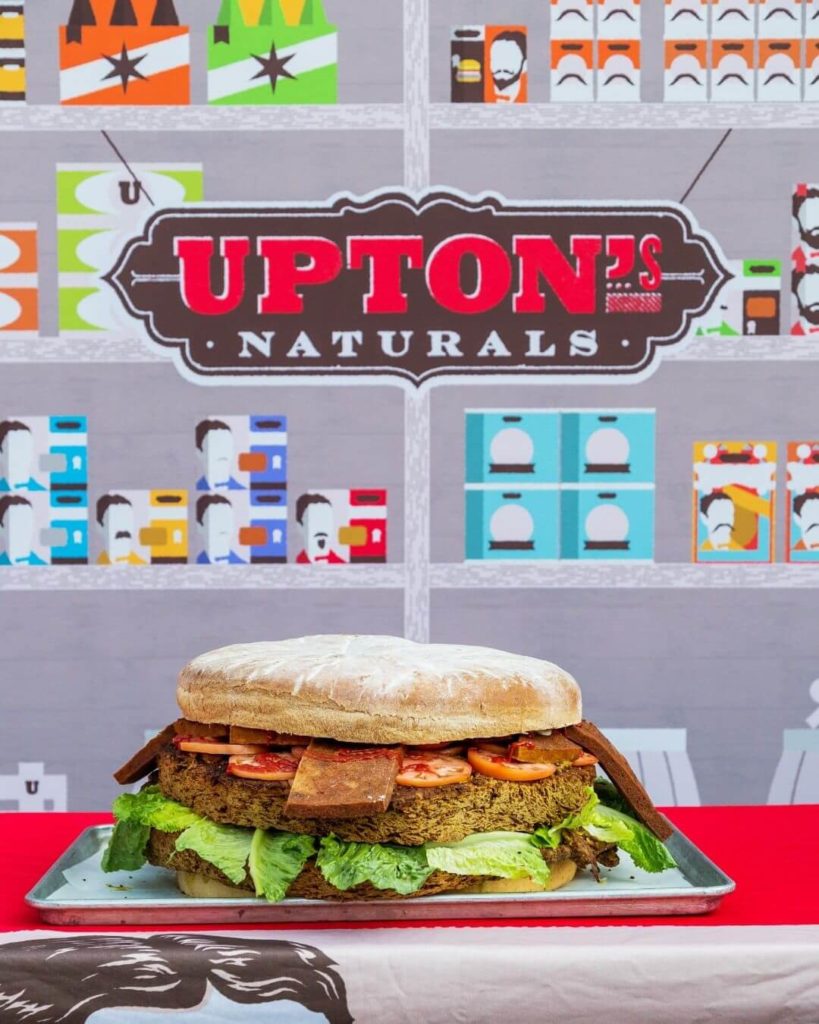 The Fight Against the Meat Lobby

Upton’s Naturals may have been celebrating success with its giant burger, but behind the scenes, it is fighting a battle with the meat industry.

Together with other vegan meat brands, Upton’s Naturals is the victim of Mississippi’s new food labeling law — the latest development in a global conversation on the language surrounding plant-based products.

The law reserves language like “meatball” and “bacon” exclusively for animal-based foods; plant-based brands cannot use “vegetarian bacon,” on their packaging, for example.

In response to the restrictive new legislation, in July, Upton’s Naturals and the Plant Based Foods Association (PBFA) worked with the Institute for Justice to file a federal lawsuit challenging Mississippi’s “unconstitutional” attempt to ban its advertising.

“Instead, consumers seek out these foods because they want to enjoy a tasty burger not made from animals,” it continues. “And Upton’s Naturals has a right to advertise its foods to those consumers using terms that will help them find what they’re looking for.”