Plant-based meat company No Evil Foods believes the key to fixing a broken system is through conscious business practices and delicious AF vegan eats. Located near Asheville, North Carolina, No Evil Foods makes meat that breaks all the rules. Firstly, it’s made of plants, not animals. It’s also better for you and the planet, but doesn’t compromise on the flavor, texture, or experience of conventional meat.

No Evil Foods was brought to life in 2014 by two fearless plant masters, Sadrah Schadel and Mike Woliansky, who shared a vision of creating the best protein on the planet and starting a food revolution. When the pair first thought up the idea of making drool-worthy, sustainable, and good-for-you meat out of plants, they were met with cynicism. “Some people told us it couldn’t be done,” co-founder Schadel told LIVEKINDLY. “We took that as a challenge and started a revolutionary company that uses food as a force for good.”

To do this, the company unites the passion of a home cook with the “spirit of a revolution.”

No Evil Foods’ compromise-free Plant Meat is made in small batches with simple ingredients. It’s mostly organic and totally free from oil, protein isolates, and cholesterol.

The couple is determined to bring people closer to the origins of their food, while also addressing issues like food insecurity, economic justice, and climate change. Animal agriculture is a leading driver of environmental issues including huge amounts of waste, water use, and 91 percent of Amazon rainforest destruction. It’s also a major contributor to climate change. One calorie of animal protein requires 11 times as much fossil fuel as one calorie of plant protein, and more than half of global greenhouse gas emissions are caused by livestock and their byproducts.

No Evil Foods even packages its planet-positive food in an eco-friendly way. The meat-free meats come in home-compostable cartons that seal with water-soluble adhesive. Even the ink on the packaging is plant-based.

The plant-based meat is packaged in home-compostable packaging. | No Evil Foods

Do No Evil, Do Plenty of Good

When the No Evils Foods team embarked on their journey, they found a “broken system that didn’t serve us.” So they decided to re-examine their own. “We made everything from scratch, grew our own food, tapped our own maple trees, and gained a DIY-fueled confidence that made us want to do even more,” Schadel said.

No Evil Foods’ hunger for more led to the creation of Comrade Cluck, a vegan chicken product made from a handful of simple ingredients including chickpea flour, European wheat, nutritional yeast, and organic garlic and onion.

“We believe in the power of an individual to create change and in not letting perfection be the enemy of progress. Small steps have a big impact and we knew that we could start with our passion for making real food and build from there,” Schadel said.

As well as the Comrade Cluck, No Evil Foods offers The Stallion, a vegan Italian sausage featuring a blend of rosemary, sweet fennel, and thyme; the Pit Boss, a plant-based pulled pork with scratch-made sweet and tangy BBQ sauce; and the El Zapatista, a meat-free Mexican sausage which can be crumbled into a crowd-pleasing taco mix. A line of shelf stable jerky will join the lineup later this year.

The company’s plant-based eats allow it to tap into its motto of “do no evil” — a phrase it names its “battle cry in the food revolution.” No Evil Foods takes this message a step further by using its influence to spread good. For instance, a portion of the sales from its El Zapatista product are donated to Schools for Chiapas, a non-profit working toward the sovereignty of the Oaxacan people.

No Evil Foods also offers a vegan holiday roast called The Pardon and a portion from every sale of it helps support the turkeys at Full Circle Farm Sanctuary in Warm Springs, Georgia. 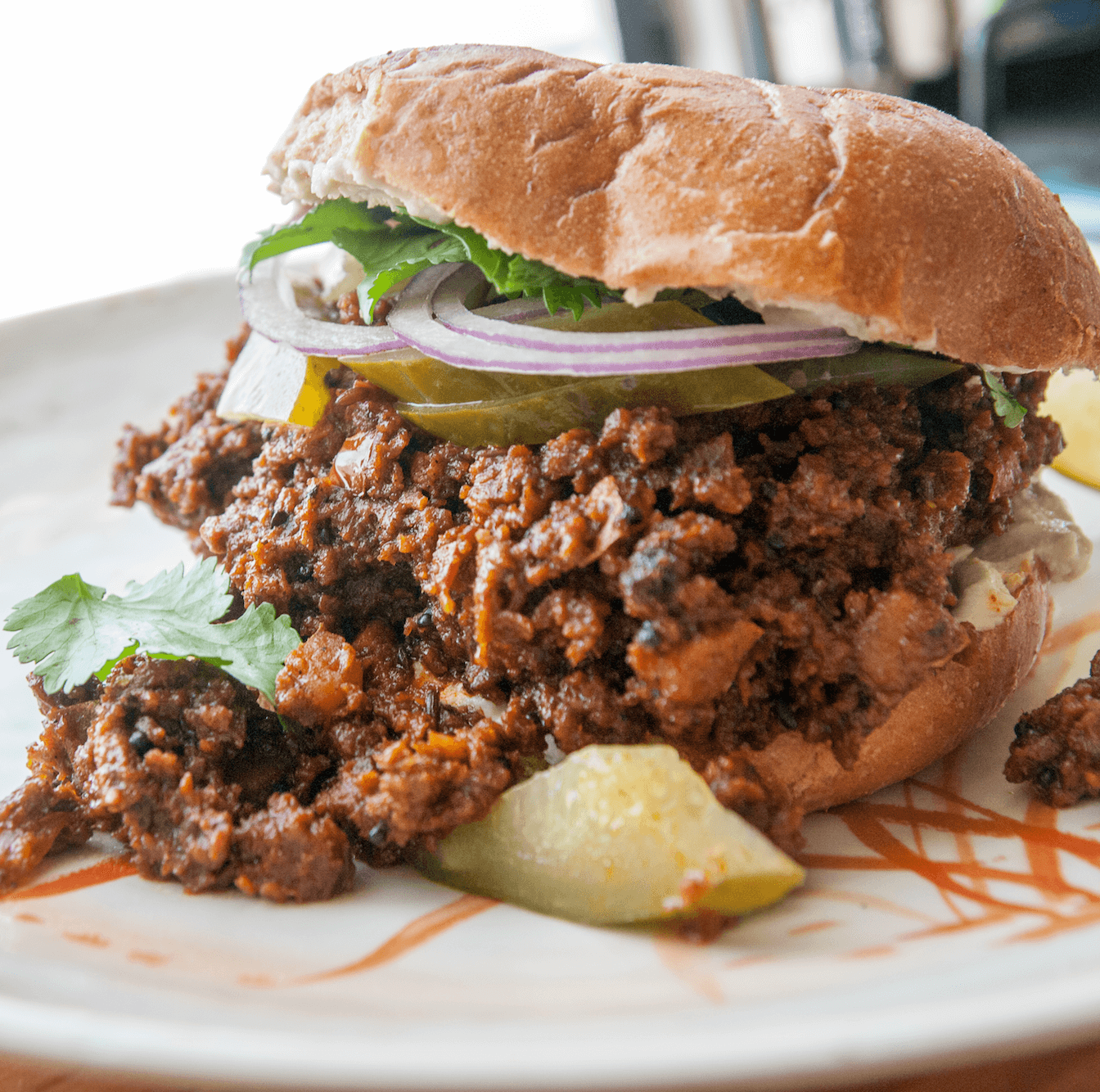 Proceeds from the vegan El Zapatista go towards non-profit Schools for Chiapas. | No Evil Foods

It wasn’t that long ago that the company founders would take a cooler of plant-based meat to a farmer’s market in Asheville to sell to local customers back in 2014. Today, No Evil Foods’ Plant Meats can be found in more than 3,000 retailers across the U.S. including Walmart and Whole Foods Market.

No Evil Foods’ expansion hasn’t swayed the team from their roots, though. The company continues its mission of propelling toward a better-for-everyone food system. “Our values remain the same,” Schadel told LIVEKINDLY. “No Evil is the place from which all of our good intentions come, a forever philosophy that never gets old.”

No Evil Foods’ products are available on its website and at various retailers.