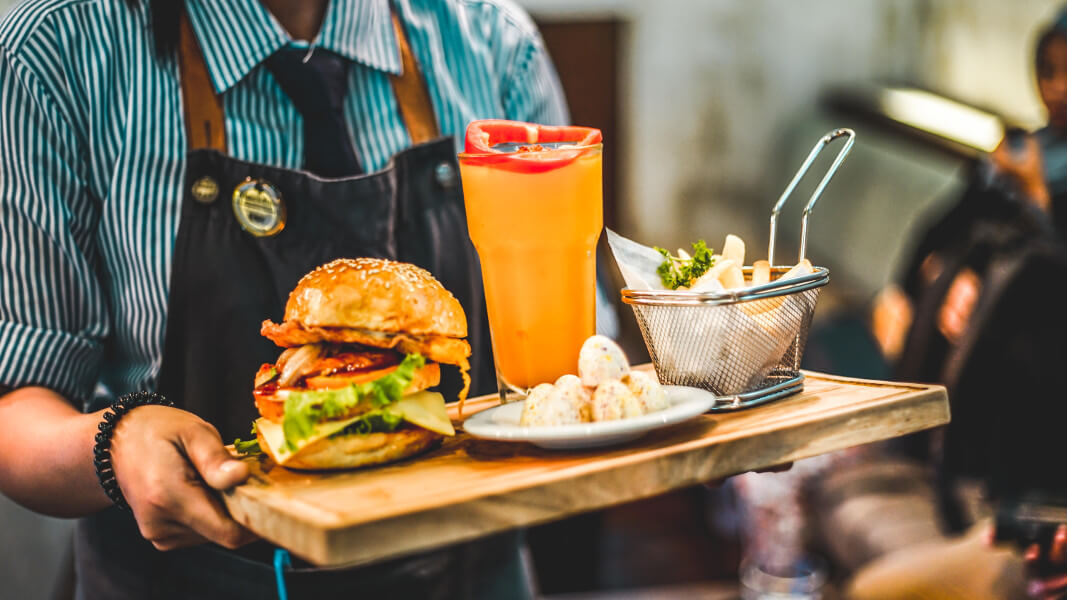 At a time when global vegan food sales in grocery stores are experiencing rapid growth and new and established omnivore brands are taking a chance with new product launches seemingly every week, a new trend is emerging in the plant-based food space. In late 2017, food-focused Chicago-based market research company Winsight released the 2018 Noncommercial Trends Forecast. The report, which was developed in collaboration with Food Service Director magazine and food industry research and strategy company Technomic, predicted the following about changes to the food service industry for the coming year:

“Plant-based dining for everyone. With sustainability and budgets in mind, operators are now putting plant-based entrees front and center instead of relegating them to a separate vegan or vegetarian station. In college dining and corporate cafes, vegetables and grains are placed at the beginning of the line and animal proteins are available at the end.”

With just four months left to go in 2018, the prediction holds true. Across the United States and in some parts of the U.K., plant-based food is steadily becoming a staple for food service companies catering to universities, public schools, hospitals, and other venues. Vegan meat, in particular, seems to be the dominant product among suppliers.

vegan meat in college dining halls and beyond

Vegan meat is becoming a staple in college campuses, a feat that would not be possible without major companies recognizing the lucrative future of plant-based protein. Last September, Sysco, the largest food distributor in the country, signed onto a partnership with California-based vegan meat brand, Beyond Meat. The company has since distributed the Beyond Meat Beyond Burger to restaurants, hospitality, healthcare facilities, and educational institutions nationwide. The move was Sysco’s latest addition to its Cutting Edge Solutions (CES) program, which introduces customers and clients to emerging food trends.

Additionally, Beyond Meat has an ongoing partnership with Aramark, the leading American food service provider. Thanks to Aramark’s efforts, the Beyond Burger was introduced to campus dining halls that utilize its services for a limited time. The company has not yet announced if the Beyond Burger will become a permanent menu fixture.

The “bleeding” vegan burger is also available at all 13 of Yale University’s dining halls. The 315-year-old Ivy League school is considered to be a leader in foodservice innovation. Further, the vegan Impossible Burger is available at the University of Chicago, and over 70 schools across the country offer vegan meat from Gardein at on-campus dining halls.

Plant-based protein is also being offered in some healthcare facilities. Hospitals led by Seventh Day Adventists, a Christian denomination that emphasizes a vegetarian diet for health, offer plentiful vegan meat options, typically by 113-year-old brand Loma Linda, which specializes in canned meat-free foods. There are a total of 52 Seventh Day Adventist hospitals across the U.S.

Last July, the American Medical Association (AMA) passed a resolution calling on hospitals to replace processed meats with vegan options, citing the health benefits of whole, plant-based foods. In the Facebook group Vegan Hospital Food Hits & Misses, members are encouraged to share their experience with plant-based meals in hospitals in order to bring attention to the need for quality options.

Vegan school lunch is becoming increasingly popular in American public schools as parents and lawmakers push for healthier options for students, driven by evidence-backed research pointing to the health risks associated with processed meat and other animal products. This past January, California’s Santa Barbara Unified School District began offering high-protein vegan meat made by Hungry Planet. The decision followed a successful one-off Earth Day partnership between the district and the brand. Soon after, the brand’s plant-based proteins were added to the menu permanently and are reportedly so popular, the cafeteria often sells out.

In the UK, Dale Vince, the owner of the world’s first vegan soccer team the Forest Green Rovers, is aiming to get plant-based meat in schools across the country. Last July, the team announced the launch of “Little Green Devils,” a vegan school lunch company that will feature allergen-friendly, plant-based meat. Production will begin at the company’s facility in Gloucestershire starting this fall. According to Vince, the company is already being approached by universities. He believes that if successful, Little Green Devils could potentially be served in facilities other than schools or perhaps even outside of the UK.