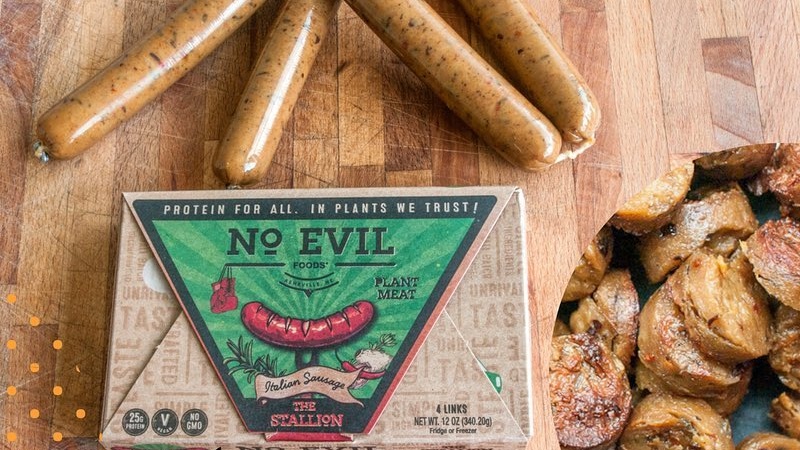 North Carolina based vegan meat brand No Evil Foods has expanded distribution of its plant-based meats to 170 The Fresh Market stores and 75 Wegmans stores.

The company announced the partnership with the supermarket chain Wegmans in an Instagram post, “Wegmans?! Now that is seriously EPIC,” the brand wrote. “We love all of our retailers, but getting #NoEvilFoods on the shelves @wegmans is especially awesome for us. Growing up in a small upstate NY Town, Wegmans was THE coolest, largest, best-stocked option. We had to drive 45 minutes to get there and it was totally worth it because they had things you just couldn’t find anywhere else. Total game-changer.”

Regarding the partnership with The Fresh Market, the chain later posted, “things just got a little fresher for our hungry friends in 24 states who have been jonesin’ for more Plant Meats in their lives.”


No Evil Foods focuses on creating sustainable, simple plant-based meat with recognizable ingredients. “Bursting with a barrage of old world spices,” the Stallion Italian Sausage is created with a multitude of natural foods, including red kidney beans, wheat gluten, smoked paprika, black pepper, and chickpea flour. Other products from the brand include Comrade Cluck, a vegan chicken style product made from only six ingredients, Pit Boss, similar to BBQ pulled pork, and The Pardon, a holiday centerpiece to replace the traditional turkey on Thanksgiving and Christmas Day.

If 25 grams of protein and millions of probiotics are wrong, we don’t want to be right. ____________ Snuck out of our basement home office today and into the sunshine. Grubbin’ on The Stallion ‘Italian Sausage’ has got us feeling summertime in a big way right now. ____________ Cooked this one up in a pan with a little bit of oil until it was browned and beautiful before loading that sucker up with homemade #beermustard, @justforall Chipotle Mayo, and a massive amount lacto-fermented sauerkraut from our friends at @sweetbrined. Threw a smattering of Kraut Krisps from @farmhouseculture on for good measure. __________ #noevilfoods #plantmeat #officeeats #homeoffice #veganlunch #fermentation #lactofermentation #probiotics #healthygut #vegansofig #instavegan #veganfoodie #sausage #whatveganseat #veganfoodshare #feedfeedvegan #cookout #bestofvegan #plantbasedfood #proteinpacked #veganfoods #nomeatnoproblem #plantprotein #veganmeal #vegancooking #plantbased #goodbacteria #guthealth #meatlessmonday

“At its core, what people want is good food and they want something they can sink their teeth into and holds its own to a variety of environments from braising to smoking to sautéing and sops and doesn’t fall apart and go to mush,”  said No Evil Foods co-founder Sadrah Schadel to FoodNavigator – USA. “So really texture was first and foremost but we also wanted the flavor to standout as well without getting lost with the other ingredients in the dish.”

Plant-based meat products are on the rise, with companies such as Beyond Meat and Impossible Foods, the creators of vegan meaty “bleeding” burgers, partnering with restaurants and distributors around the world. According to The Grocer, traditional meat companies are now becoming nervous of the vegan meat industry. The publication, who carried out research in collaboration with England Marketing, revealed in June that the disruption from plant-based alternatives was “unprecedented.” It continued, “the ethics, sustainability and health credentials of the meat industry are under growing attack.”