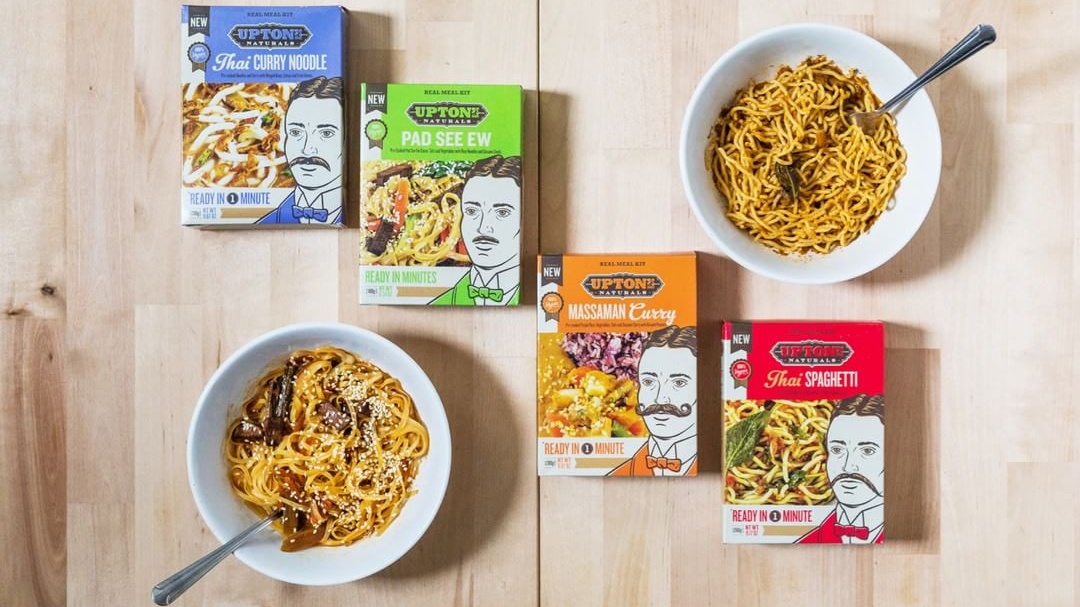 The new products, including Massaman Curry, Thai Spaghetti, Pad See Ew, and Thai Curry Noodle, were inspired by a trip to Thailand where the team sourced ingredients for Upton’s line of jackfruit products.

“Whilst sourcing ingredients for our line of Jackfruit products, we fell in love with the flavors of Thai cuisine,” Upton’s website notes. “We’re excited to share with you some of our favorite dishes from our time in Thailand. Upton’s Real Meal Kits are all inspired by authentic recipes.”

The company also recently launched two other sixty-second meal kits: Ch’eesy Mac and Ch’eesy Bacon Mac. “We know you’re busy, so we wanted to offer a fully composed meal that’s easy to heat and eat,” the website continues. “Inside, you’ll only find real, whole ingredients. No extra preservatives, no freeze-dried vegetables. Just follow the instructions on [the] pack and you’ll be enjoying a real meal in minutes!”

Usually our Bacon Mac gets all the glory, but did you know we make a Ch’eesy Mac, too? No Bacon Seitan, but all of the YUMs! . . . . #uptonsnaturals #cheesymac #vegan #macandcheese #cravings #treatyoself

Founded by Daniel Staackman, Upton’s launched in 2006, specializing in flavored wheat-based seitan products. In 2015, the brand debuted the first-ever ready-to-eat jackfruit product in the United States. “[Upton’s is] dedicated to simplicity and the use of real, recognizable ingredients, the Upton’s team takes foods that have been around for thousands of years and offers them to consumers worldwide,” the company states.

In 2006, “vegan meat” was not a known term;  even the word “vegan” wasn’t widely used. Because of this, the company made sure to use the word “vegetarian” in its branding. Since Upton’s Naturals launch, however, the vegan meat industry has soared in popularity. One recent report revealed that vegan meat is no longer considered a niche product. According to the report, convenience, affordability, and an increasing awareness of the health benefits of a plant-based diet are the reasons behind this shift. But it’s also down to taste. One recent study from Mintel claimed that over fifty percent of Americans eat vegan protein regularly because they prefer the way it tastes over animal products. “At the end of the day, taste is the driving force behind purchase and eating decisions,” said Billy Roberts, a senior food and drink analyst at Mintel.

The new sixty-second meal kits will be available to purchase from natural food retailers across the U.S., select Whole Foods locations, and independent grocery stores.