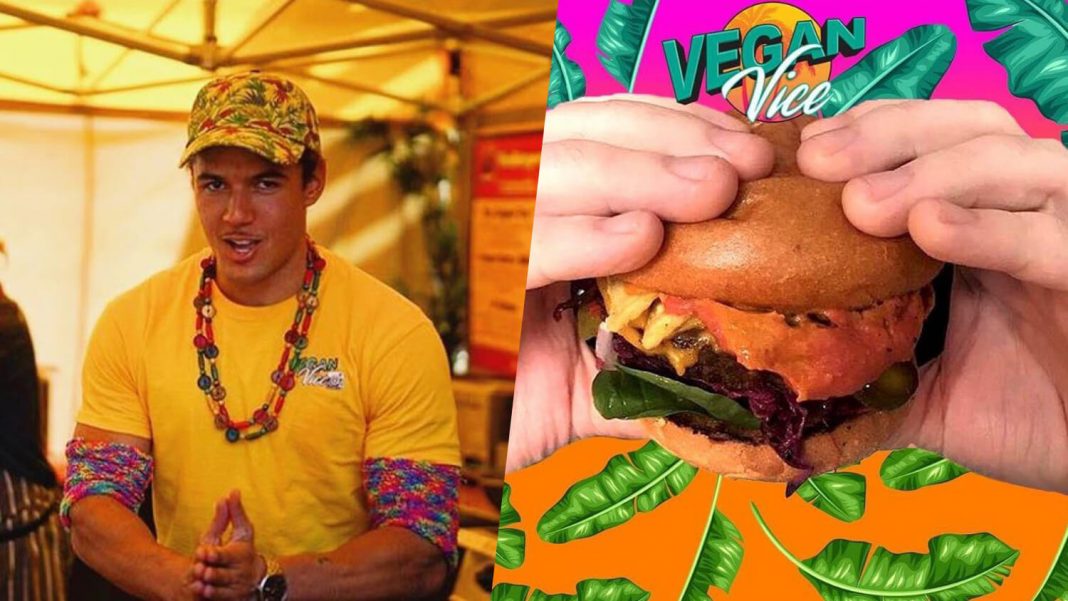 A Miami Vice-themed vegan comfort food stand is set to take over a UK-based cocktail lounge later this month.

The restaurant, called Vegan Vice Club, serves seitan-based burgers at festivals and pop-up events across the UK. Last week, it took to Instagram to announce its permanent residency at the Ta Bouche cocktail lounge in Cambridge.

“WE’RE HERE to free you from meat forever! We’re very excited to bring you the *new* incredible lunchtime and after-work treats,” it wrote. “2019 is gonna be all kinds of fun. You know where to come for that delicious 30g of protein fix.”

The ‘Transformative Power’ of a Single Burger

Vegan Vice Club specializes in plant-based burgers such as The Truffle Shuffle Deluxe, which features a hand-battered seitan CropChick’n fillet, housemade eggless truffle mayo, dairy-free cheese, sweet pickles, slaw, and greens on a brioche bun. The menu features a total of six vegan burger varieties, plus vegan chicken tenders, and fries. New additions to the menu will be added once the restaurant opens in Ta Bouche.

According to the website, the pop-up was founded last year by cousins Connor and TommyD with the mission of providing diners with flavourful comfort food with no compromise on taste or texture. The pair hope to spread love and compassion towards all living beings through their food and positive message.

“We’re not about lecturing people about the benefits of veganism; because when you know…you’ll know,” they wrote.“We’re about love and peace, and having a one helluva good time with whoever and wherever we may be.”

All of Vegan Vice Club’s housemade vegan meats are twice-fried, providing a texture that’s crispy on the outside, but tender on the inside.

“Sounds dumb but hear this- we have been many people’s first vegan experience -providing a portal into a whole new world of eating and understanding” they wrote, adding that their seitan-based burgers have even duped meat-eaters.

The Vegan Vice Club pop-up is set to open in Ta Bouche on Market Street in Cambridge later this month. It will be open daily, from 11am to 10pm.