(Updated July 13, 2021) | Vegan musician, author, restaurateur, and prominent animal rights activist, Moby, say that all of the profits from his new album will be given to animal rights organizations. Profits from his upcoming live shows will also be donated. The album, “Everything Was Beautiful, And Nothing Hurt,” is due for release this coming Friday.

The album is Moby’s 15th studio album and follows previous political album releases including 2016’s “These Systems are Failing” and 2017’s “More Fast Songs About the Apocalypse.”

The album cover appropriately for “Everything Was Beautiful And Nothing Hurt” features a father cow reading to a baby calf designed by Matthew Grabelsky, a Los-Angeles-based artist.

“The album comes out Friday, and 100% of the profits, from streaming, sales, licensing, publishing and live shows, are going to #animalrightsorganizations,” the singer wrote in an Instagram post. He added, “Animal rights are more important to me than any small, selfish concerns I might have.” 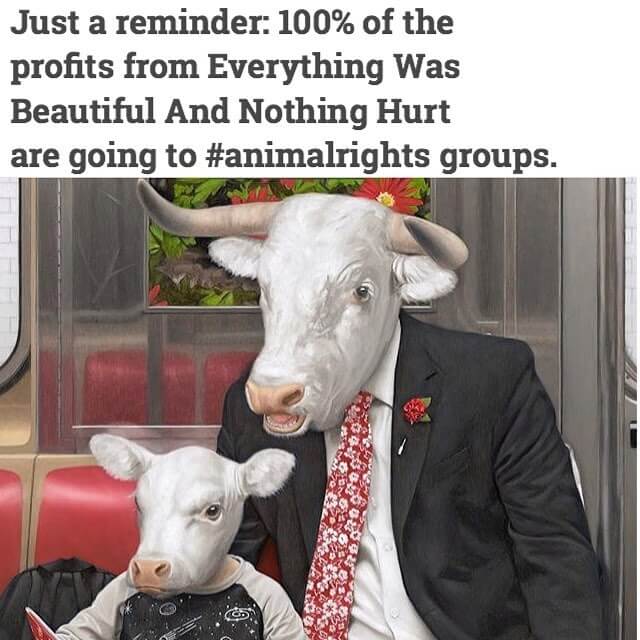 This is not the first time that Moby has given generously to animal rights charities. Back in November of last year, the musician donated a quarter of a million dollars to various animal welfare organizations, stating that the money would be going to non-profits who carry out invaluable work for animals. All of the profits from his trendy Los Angeles restaurant, Little Pine, are currently donated to Mercy for Animals, the Humane Society, the Humane League, and PETA, amongst others.

Additionally, the musician produced and performed at Circle V, an animal rights festival event held in Los Angeles. All of the profits from this event went to Mercy for Animals.

Moby has been a vegan for more than thirty years, and during this time he has helped the animals in many ways. From launching vegan restaurants to producing vegan music festivals to staying politically active across his social media accounts; the star has admirably devoted much of his life and work to helping vulnerable animals.