New York State’s O’Donoghue’s Tavern has been running a popular recurring event called “Vegan Nite.” This series breaks away from the idea that quick and/or pub food has to be made from animal ingredients. This series follows the pub’s 2017 change in ideology. According to Lohud, O’Donoghue’s (or O’D’s if you’re a local), reopened for dinner last April, “with a new menu focusing on organic, vegetarian-friendly and GMO-free food.”

The Vegan Nite series is planning a special dinner on Wednesday, January 31st, ending the first month of the new year with something meaningful. That day the menu will be comprised entirely of vegan Native American-inspired food. 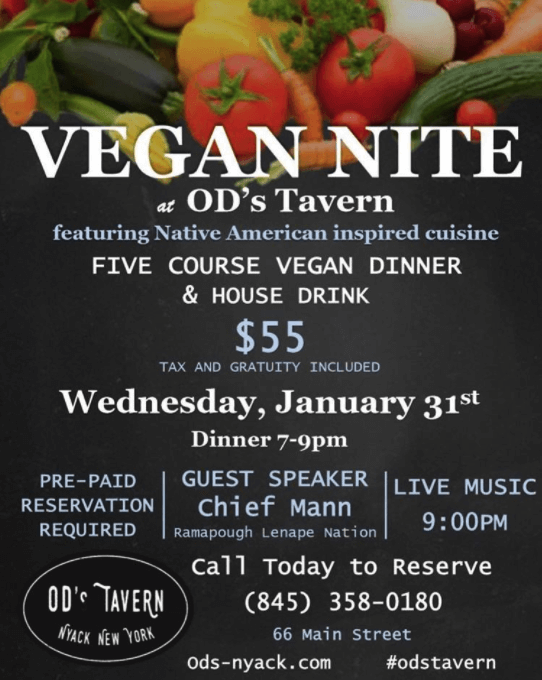 This is not just a tavern borrowing another culture’s food for a night. In addition to the vegan food, attendees will hear from guest speaker Chief Mann of the Ramapough Lunaape Nation.

Seating is limited; the fee for the event is $55, which includes a five-course dinner, house drink, tax, and gratuity. The evening is set to run from 7 PM to 9 PM.

Folks interested in attending are encouraged to make reservations ahead of time, as early as possible — as tickets may not last long. The tavern is located at 66 Main Street, Nyack, New York. To make reservations, call 845-358-0180.