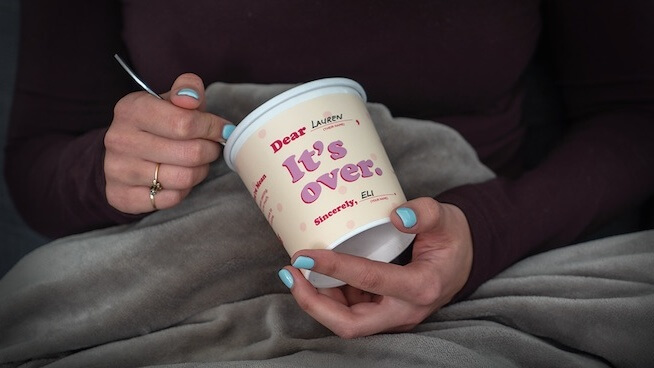 Vancouver-based vegan ice cream brand Nora’s has launched a new limited edition range of Breakup Pints – for when you don’t know know how to say “it’s not me, it’s you.”

Available in Bye Bye Brownie, Strawberries and You’re Mean, and Just Vanilla, the new cashew-based pints allow customers to break up with their partners in the kindest (and sweetest) way possible – with ice cream.

“With people dating and dumping so frequently, the pints serve a very important need – the need to break it off with someone without too much drama, time, or awkwardness,” Nora’s told blog Vancouver is Awesome. “You know what they say: ‘A spoonful of ice cream helps the rejection go down.”

?Introducing our new fill-in-the-blank Break-Up Pints! Instead of ghosting or ending that fling via text, break it off with some ice cream. You know what they say, ‘A spoonful of sugar helps the rejection go down.’ Find them tomorrow at Be Fresh Cypress until supplies last.

Whilst the new break up ice cream is currently only available from the Be Fresh Market in Cypress, customers can get their hands on Nora’s other flavors – such as Mint Chip and Peanut Butter and Chocolate – in a number of locations, including in Whole Foods stores across British Columbia, where it launched earlier this year.

Founded by dairy-free duo Tyler and Katherine in a bid to help the environment and the animals, Nora’s is named after their pet cat. According to the brand’s website, the pair decided to start Nora’s as the other plant-based ice cream options on offer just weren’t as indulgent or as satisfying as they hoped.

The pair note on the website, “We knew we couldn’t be the only people facing this issue, so we invested in a tiny home ice cream maker and started recipe testing. After 8 months, we finally had our perfect formulation, with house-made cashew milk as our magic ingredient. We couldn’t be happier or more excited to share Nora’s with you!”

“The bottom line is if we can enjoy a rich, decadent, creamy ice cream without the ethical, environmental and health issues that come along with dairy – why wouldn’t we?” They add.

The vegan ice cream market has come a long way since Nora’s was founded, with a number of dairy-free options now available. In fact, by 2024 it’s predicted that the market will be worth more than $1 billion. Most recently, major retailer Target announced the launch of a new private-label range of nondairy ice cream.