By Sunny Gandara
Jump to recipe

Fastelavn is celebrated the Sunday before Ash Wednesday and evolved from the Roman Catholic tradition of celebrating the days before Lent. Often referred to as the Nordic Halloween, children will dress up in costumes and gather treats for the fastelavn feast. Although we don’t see as much of this tradition in Norway, it’s still practiced in Denmark, who I think are the masters of fastelavn and are known for parades and festivities across the country.

The term fastelavn comes from the old Danish fastelaghen, which again is borrowed from the German word vastel-avent, or fasten abend, meaning “fast evening.” Much like Fat Tuesday (or Mardi Gras) in this country, the day was created to “fatten up” before the fast. In Norway, this Tuesday is often referred to as “white Tuesday,” when white food like flour and milk products were on the menu. In fact, fastelavn is not only one day, but three; fastelavn Sunday, Blue Monday, and Fat Tuesday.

Originally a pagan spring fest, many old customs are connected to fastelavn, like fastelavnsris, a bouquet of birch branches that is often decorated with colorful feathers or candy, among other items.

The story goes that women, animals, and trees were to be woken up to fertility by being whipped with these birch branches. It was practiced specifically on young married women with no children. A lot of superstition surrounded the birch, which was filled with sprigs full of life this time of year, hence the branch was often called “the life branch.” People believed that birches without leaves had true fertility power and the sprigs which developed were a sign of life to come.

Gluttony was the key word for fastelavn. One custom was to eat nine times in every corner of the living room – that totals 36 times! Food included bacon, fatty soups, and flour buns. These flour buns were probably the origin of what Scandinavians make and eat surrounding this day, and what is called fastelavensboller; in Norway and Denmark a sweet bun filled with whipped cream and jam.

In Sweden, you have the delicious “semla” or “semlor,” a very similar creation. The difference is the Swedes stuff the inside of the buns with marzipan, something I’ve tried for this recipe. You can access my traditional recipe for Norwegian fastelavnboller here.

Historically, only wealthy people living in big cities made fastelavnsboller, and fastelavn didn’t become a nationwide tradition until the 20th century. There are endless variations of recipes, of course, but the commonality of the fastelavnsboller is that they contain whipped cream and many are dusted with confectioners’ sugar while some may be topped with chocolate.

I find it interesting comparing the different buns, or cream puffs, among the three Scandinavian countries, Norway, Sweden, and Denmark. They are very different in many ways although they may look similar. Norwegians prefer theirs quite simple, with a little bit of sweetened whipped cream and a dusting of confectioners’ sugar, perhaps some raspberry or strawberry jam in the middle.

The Swedes will scoop their buns out, making room for more filling, and sometimes mix the scooped out center with a little marzipan and milk and place it back in the center of the bun. The Danes will use a wienerbrød base to make their buns (I will write about winerbrød and include a recipe in a later post). The buns are often filled with either a chocolate or vanilla custard and whipped cream mixed with some raspberry jam and often glazed with chocolate as well.

I hope you will enjoy my Swedish version today – a bit more decadent perhaps but also fun to experiment with. I used a store-bought marzipan from Odense, which is readily available all across the United States in grocery stores. If you’re the ambitious type, you can of course make your own marzipan – feel free to refer to this recipe for that.

If you don’t want the marzipan filling, you can simply skip that step, and just make the cardamom buns and top with coconut whipped cream. Either way, you are in for a treat!

This Vegan Norwegian Pastry Is Stuffed With Dairy-Free Cream 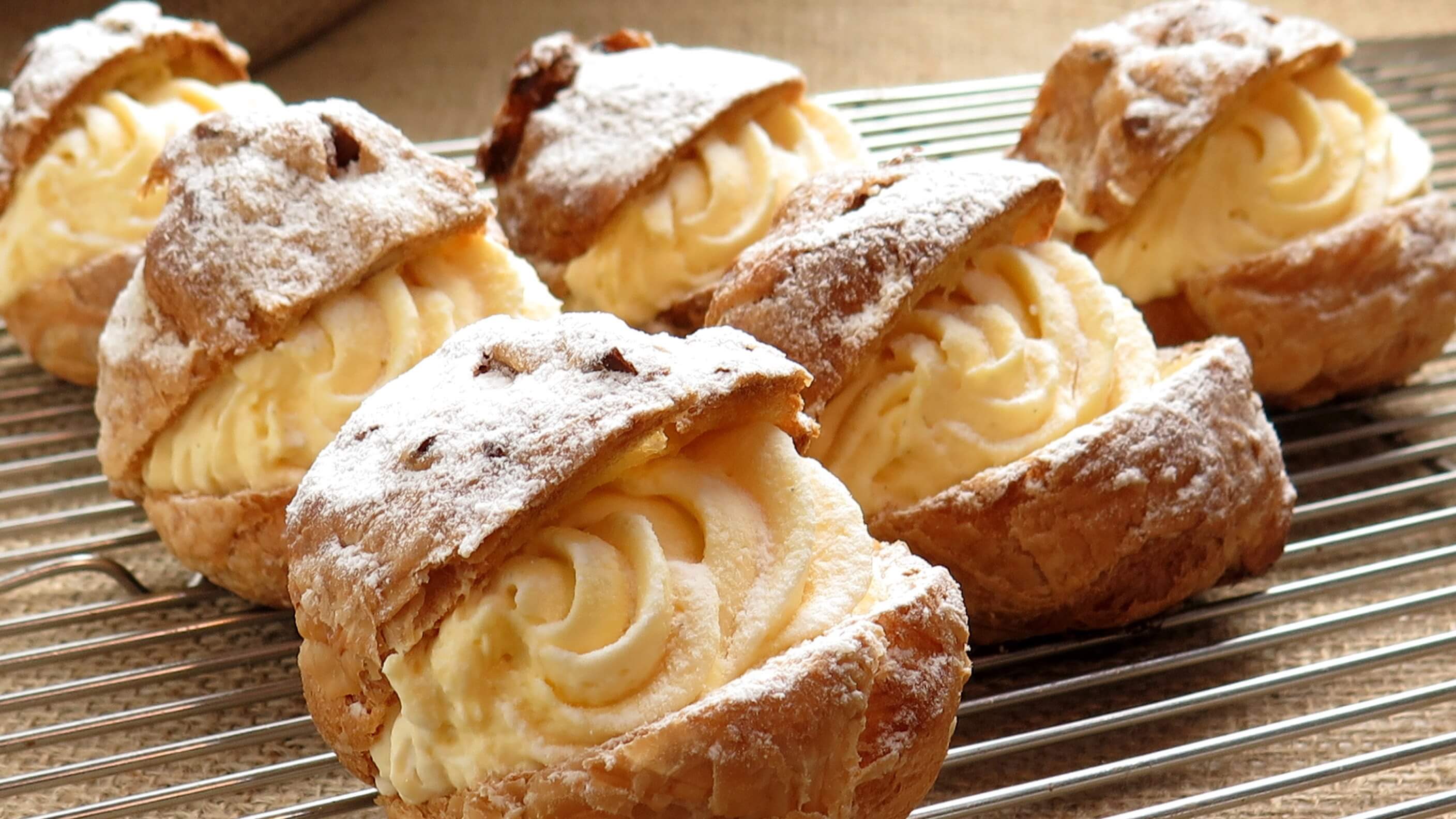 For the cardamom buns: